This is an online event ALBANY Germany. 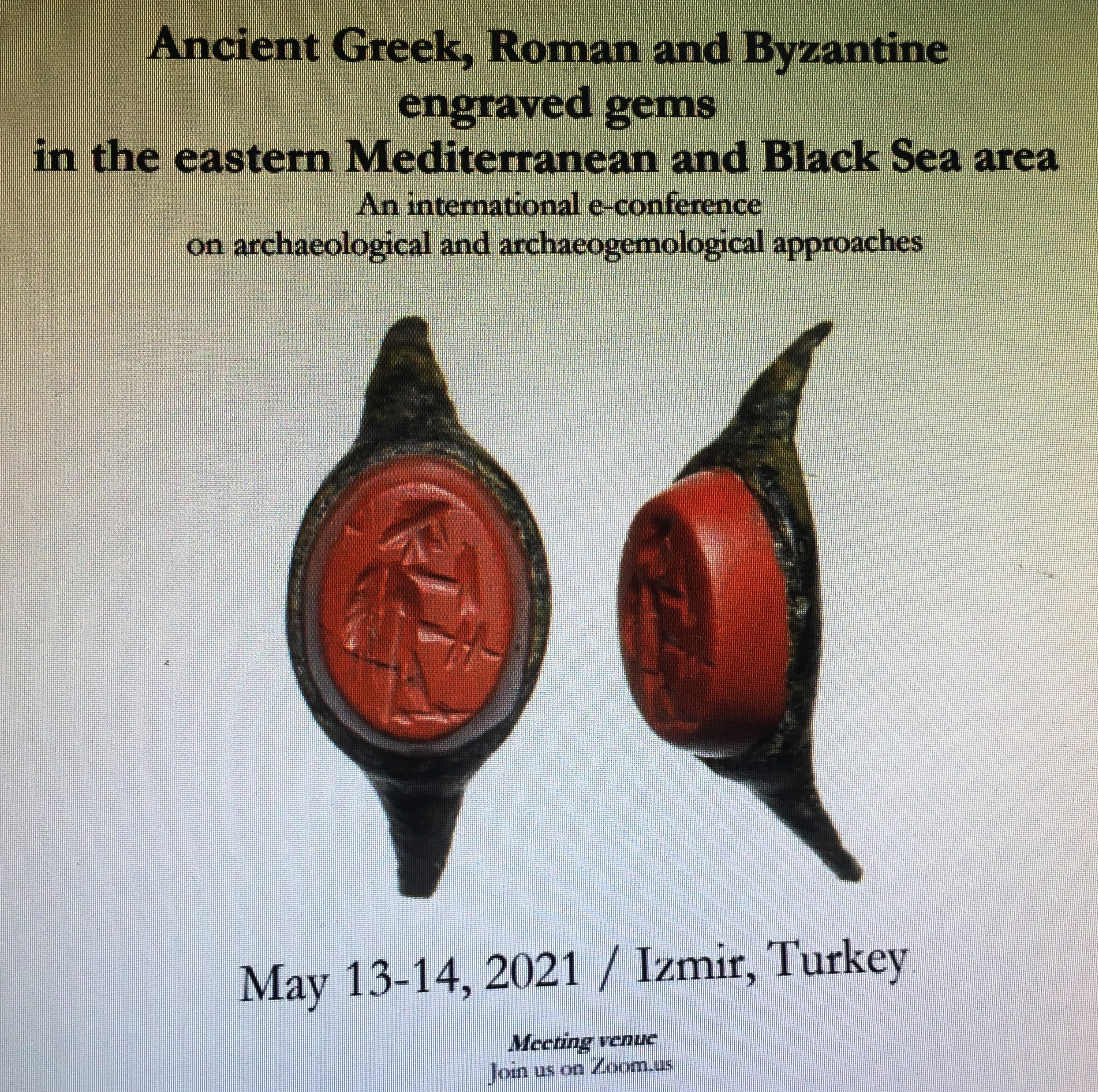 We are glad to inform you that an international video conference on engraved gems in the Archaic, Classical, Hellenistic, Roman and Byzantine eastern Mediterranean and Black Sea area will take place on May 13-14, 2021 on Zoom.us. An engraved gem, frequently referred to as an intaglio, is a small and usually semi-precious gemstone that has been carved, in the ancient Greek and Roman tradition normally with images or inscriptions only on one face. The engraving of gemstones was a major luxury art form in the ancient eastern Mediterranean. Near Eastern glyptic art covers the field of small carved stones, including cylinder seals and inscriptions in archaeological contexts. Though in the Graeco-Roman Mediterranean they were keenly collected in classical antiquity, most carved gems originally functioned as seals, often mounted in a ring.
Engraved gems were found in relatively large quantities in the eastern Mediterranean and Black Sea area, where they were in use and produced frequently between the Bronze Age and Medieval periods. So far the study of these multifunctional objects has been overlooked in the eastern Mediterranean whereas there is still a huge amount of unpublished material from excavations and museums in an area from Albania down to Egypt, including Greece, Turkey and Cyprus. Some presentations can, however, deal with western European material and topics to enlarge the parallels and the discussions in the eastern Mediterranean. Ancient engraved gems can be categorized based on different criteria, including their gemological and mineralogical material, genres of material, decoration, production, use and distribution.
In this online conference we only focus on Greek, Roman and Byzantine engraved gems from the eastern Mediterranean and Black Sea area between c. early sixth century B.C. and early seventh century A.D., and attempt to set out a comprehensive model for the study of engraved gems, including their definition, typology, chronology, contexts, function, regional characteristics and distribution patterns in the whole eastern Mediterranean and Black Sea geographies. It is also our intention to create a complete bibliography of previous publications on engraved gems.
We warmly invite contributions by scholars and graduate students from a variety of disciplines related to these objects. Intended to bring together scholars of Greek, Roman and Byzantine archaeology to discuss a range of issues concerning these instruments’ characteristics, this electronic conference should be an excellent opportunity to increase our knowledge about this material. The following theme groups are the main questions of this online conference which are prescriptive:

On these themes and questions, all disciplines, approaches and methods susceptible to bring some progress to our current knowledge are of course welcome: classical archaeology, Byzantine archaeology, gemology, mineralogy, archaeometry, petrography, history of art, ancient history, sigillography, glyptics and cultural anthropology etc. Gemological, mineralogical and archaeometric papers related to engraved gem research are most welcome. English is the official language of the e-conference. Your lecture will be recorded during the conference and this record will be displayed in Youtube after. The e-conference is free of charge.
We would be delighted, if you could consider contributing to our e-conference and contact us with the required information below before January 1, 2021. Our e-mail addresses are: terracottas@deu.edu.tr or gul1988kaynakci@gmail.com
We would be thankful, if you send us your abstract and required information only in word doc. For all your queries concerning the e-conference our phone number is: +90.539.511 74 08.
The proceedings of the e-conference will be published in the series of “Alter Orient und Altes Testament – Veröffentlichungen zur Kultur und Geschichte des Alten Orients und des Alten Testaments (AOAT)ˮ of Ugarit-Verlag in Münster, Germany in 2022 (ennumbered as AOAT 470 or 480). For further information about these series cf. .
The organizers seek to widen participation at this e-conference, and would like to encourage colleagues from all parts of the world to attend. The conference committee kindly requests that you alert any persons within your research community who would be interested in participating at this e-conference, either by forwarding our e-mail through Facebook or other similar social media, or by printing this circular or our poster and displaying it in your institution. We hope that you will be able to join us on Zoom, and look forward to seeing you in May!