Cappadocia and Cappadocians in the Hellenistic, Roman and early Byzantine periods. An international symposium on the southeastern part of central Anatolia in classical antiquity

Sponsored by: The Izmir Center of the Archaeology of Western Anatolia (EKVAM) 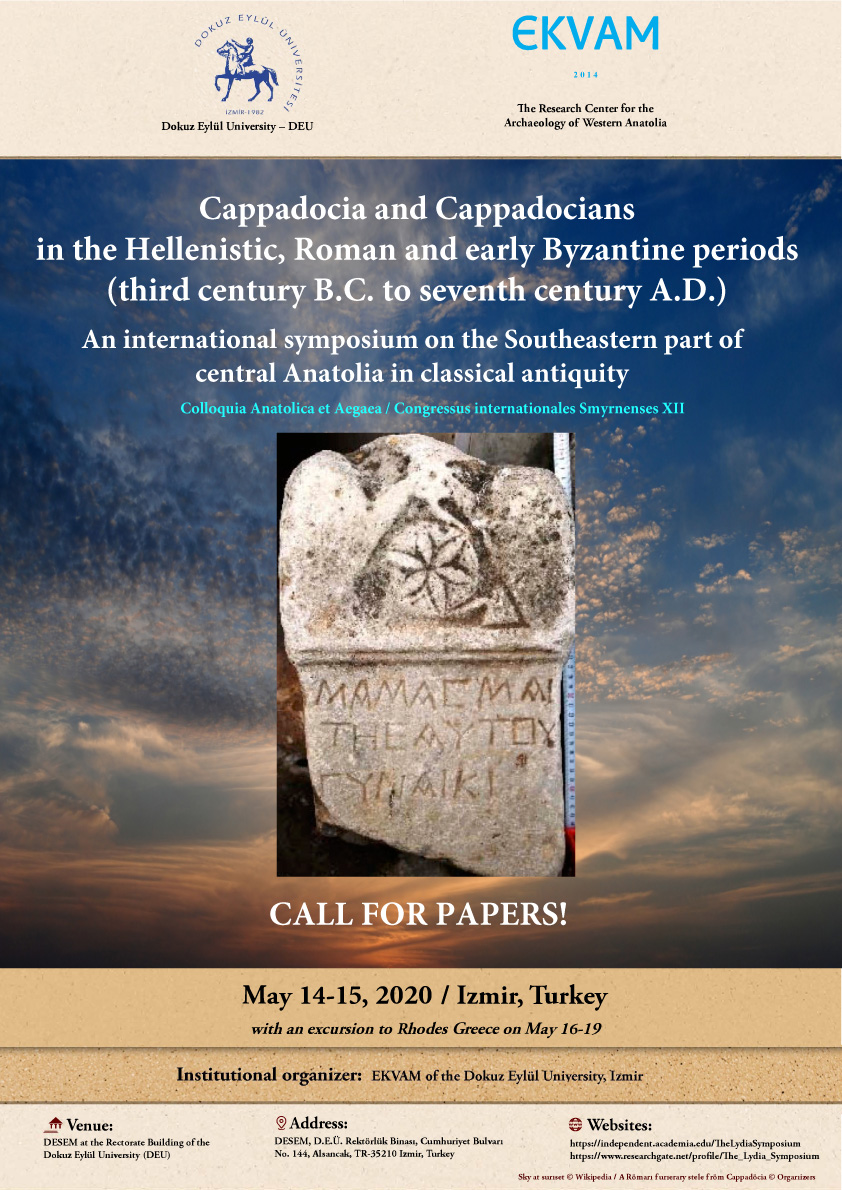 The Izmir Center of the Archaeology of Western Anatolia (EKVAM) is glad to inform you that an international symposium on the ancient region of Cappadocia in southeastern part of central Turkey will take place on May 14-15, 2020 at the Dokuz Eylül University (DEU) in Izmir, Turkey. Today Cappadocia covers Turkish provinces of Nevşehir, Kayseri, Kırşehir, Aksaray and Niğde as well as minor parts of Sivas and Kahramanmaraş. Herodotus reported Cappadocians as occupying an area stretching from Taurus Mountains to the vicinity of the southern Black Sea in the time of the Ionian Revolt in 499 B.C. In this sence Cappadocia was bounded in the south by the chain of the Taurus Mountains that separate these mostly plain landscapes from Cilicia, to the east by the upper Euphrates, to the north by Pontus, and to the west by Lycaonia and eastern Galatia. Today the name “Cappadocia” continues in use as an international tourism concept to define a region characterized by fairy chimneys (Turkish “Peri Bacaları”) and a unique historical and cultural heritage.
After ending the Persian Empire, Ariarathes I, a Persian aristocrat, became the king of Cappadocians between 332–322 B.C. Under Ariarathes IV Cappadocia came into relations with Rome in the early second century B.C., and the Roman emperor Tiberius reduced Cappadocia to a Roman province. In A.D. 314 Cappadocia was the largest province of the Roman Empire. In A.D. 371 the western part of the region was divided into Cappadocia Prima, with its capital at Caesarea (modern-day Kayseri) and Cappadocia Secunda, with its capital at Tyana. These two Cappadocian provinces became more important in the latter part of the fourth century A.D., as the Romans were involved with the Sasanian Empire over control of Mesopotamia. As Strabo considered Cappadocia as “almost a living part of Persia”, it still retained a significant Iranian character in this period. Therefore, Stephen Mitchell notes in the Oxford dictionary of late antiquity “Many inhabitants of Cappadocia were of Persian descent and Iranian fire worship is attested as late as 465”. For most of the early Byzantine era Cappadocia remained relatively undisturbed by the conflicts in the area with the Sassanid Empire, but was a vital frontier zone later against the Muslim conquests. During the Byzantine period Cappadocia contains famous underground cities which have vast defence networks of traps throughout their many levels.
In scholarly research Cappadocia is known more through Byzantine mural paintings in cave churches at Göreme and Ürgüp from the eighth-ninth centuries to the 13th-century A.D., but the number of studies on Hellenistic and Roman Cappadocia is rather limited. The aim of this symposium is therefore to report on the state of research concerning Cappadocia between the late-fourth century B.C. and mid-seventh century A.D. We warmly invite contributions by scholars and graduate students from a variety of disciplines related to this region. Intended to bring together scholars of archaeology, history, historical geography, epigraphy and other related disciplines in ancient Anatolian studies to discuss a range of issues concerning this region’s archaeology and history, this symposium should be an excellent opportunity to increase our knowledge about this region. The following theme groups are the main questions of the symposium which are prescriptive:

On these themes and questions, all approaches and methods susceptible to bring some progress to our current knowledge are of course welcome: archaeology, ancient history, historical geography, epigraphy, numismatic, history of art, cultural anthropology etc. English is the official language of the symposium. The symposium will take place at the Blue Hall of DESEM in the Chancellery Building of DEU. A local archaeological journal is planned as a special issue containing the symposium’s abstracts which will also be made available on the website. The proceedings of the symposium will be published in 2022. The symposium is free of charge. We will make the required hotel reservations as soon as we know the exact number of participants. The approximate cost for the accommodation per night + breakfast will be 20 €. A post-symposium excursion is planned on May 16-19 to Rhodes, Greece through Marmaris. For the participants who cannot travel to Izmir, we will arrange a video-conference facility, also through Skype. There are several low-cost flight companies (Pegasus, Sunexpress, Onur Air, Easyjet, Eurowings etc.) which operate direct flights to Izmir from several locations.
We would be delighted, if you could consider contributing to our symposium and contact us with the required information below before December 31, 2019. Our e-mail address is: terracottas@deu.edu.tr For all your queries concerning the symposium our phone number is: +90.544.938 54 64. The organizers seek to widen participation at this symposium, and would like to encourage colleagues from all parts of the world to attend. The symposium committee kindly requests that you alert any persons within your research community who would be interested in participating at this symposium, either by forwarding our e-mail, place it in your own websites or by printing this circular and displaying it in your institution. We hope that you will be able to join us at the Dokuz Eylül University, and look forward to seeing you in Izmir!