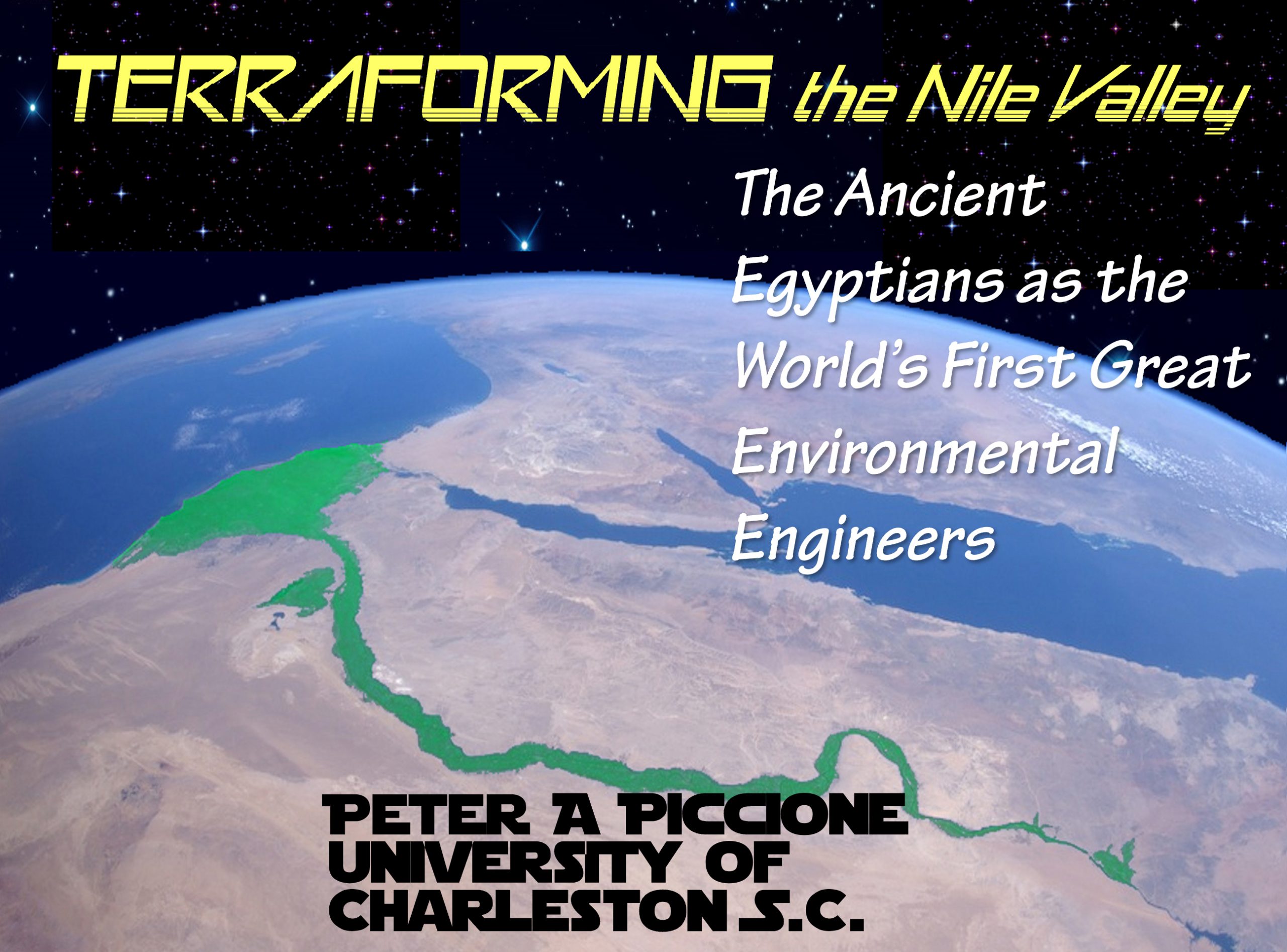 The American Research Center in Egypt, Northern California Chapter, and the Near Eastern Studies Department, University of California, Berkeley, invite you to attend a lecture by Dr. Peter Piccione, University of Charleston

This lecture presents the work of the University of Charleston Online Geographical Information System for the Theban Necropolis, and the observations of the Satellite Survey of Theban Tombs Project, with a focus on the landscape of Western Thebes, and then Egypt beyond. We argue that the Egyptians were the world’s earliest terraformers on a mega-scale, and demonstrate the ways in which they dramatically altered their landscapes. They were not the slaves of their environment, but were supreme exploiters, and were not averse to making dramatic changes to their landscapes to suit their needs. They were also confident adaptors of existing conditions, compensating for features and deformations in the terrain in their building projects and exploiting defects in the rock, e.g., by consciously seeking appropriate cracks and fissures and using them to facilitate construction, and even to guide their architectural planning. In another regard, they were able to reshape external landscapes on a massively large scale in ways that modern scholars often overlook, e.g. leveling large sections of uneven ground, removing thousands of tons of rock, quarrying away whole hillsides, reshaping large rock faces, even to the point of remaking the landscape of an entire valley, such as Deir el-Bahari. These adaptations, and the will to implement them, give the impression that the Egyptians viewed their landscapes as something plastic or malleable that could be molded and shaped, sculpted and remade to meet their needs, given enough imagination, resources, labor and coordination. (Excerpted from https://www.bowers.org/index.php/programs/bowers-book-club/event/2130-arce-terraforming-the-nile-valley-the-ancient-egyptians-as-the-world-s-first-great-environmental-engineers).

http://history.cofc.edu/images/piccione-p.jpg.pagespeed.ce.msPljpH2Ft.jpg Dr. Peter Piccione is an Egyptologist and Near Eastern historian best known as a specialist in ancient Egyptian religion, culture, and language, particularly, Egyptian rituals and those daily-life activities that had specific religious meaning and connotation. Hence, he is an authority on Egyptian games, sporting and athletic activities, and aspects of medicine and medical practices. Since 1998, he has held a position on the faculty of History at the College of Charleston and its graduate unit, the University of Charleston, S.C. He has taught courses and lectured in Egyptian history, society, medicine, and language at Cornell College, the Oriental Institute Museum in Chicago, Northwestern University, and the Field Museum of Chicago. He earned his doctorate in Egyptology and Near Eastern Studies in 1990 at The Oriental Institute of The University of Chicago. He has lived and traveled widely in Egypt and the Middle East, performing research as an epigrapher and archaeologist for his own research projects, as well as for those of the University of Charleston, S.C., the Oriental Institute, and Northern Arizona University. He has authored articles on Egyptian history, culture and language in peer-reviewed academic journals and publications, as well as the Internet, and he has presented many erudite papers on his research for academic societies and symposia. He is also active as a consultant on Egyptological issues to educational organizations (e.g., National Geographic Society), publishers, film and documentary producers, museums, and private and government agencies.

In recent years, he has begun adopting the methods and techniques of the earth sciences to understand how the Egyptians modified and adapted their environment, as well as the natural processes that shaped the Egyptian landscape and formed the archaeological sites. He works actively to apply geographical information systems and global positioning mapping to the methods of survey archaeology. Here his work has centered on the cemeteries of Western Thebes, where he co-directs the On-line Geographical Information System for the Theban Necropolis (OLGIS-TN), which is managed through the Santee-Cooper GIS Laboratory of the College of Charleston. The purposes of this project are to map the private cemeteries of Western Thebes through ultra-high resolution satellite imagery; to input Egyptological and geographical data on the tombs into a geographical information system (GIS) database; and to make the data available to scholars via the World Wide Web. (Excerpted from http://piccionep.people.cofc.edu/bioabstract.html and elsewhere).

A map of the campus is available online at http://www.berkeley.edu/map/
For more information about Egyptology events, go to http://www.facebook.com/NorthernCaliforniaARCE or https://www.arce-nc.org.