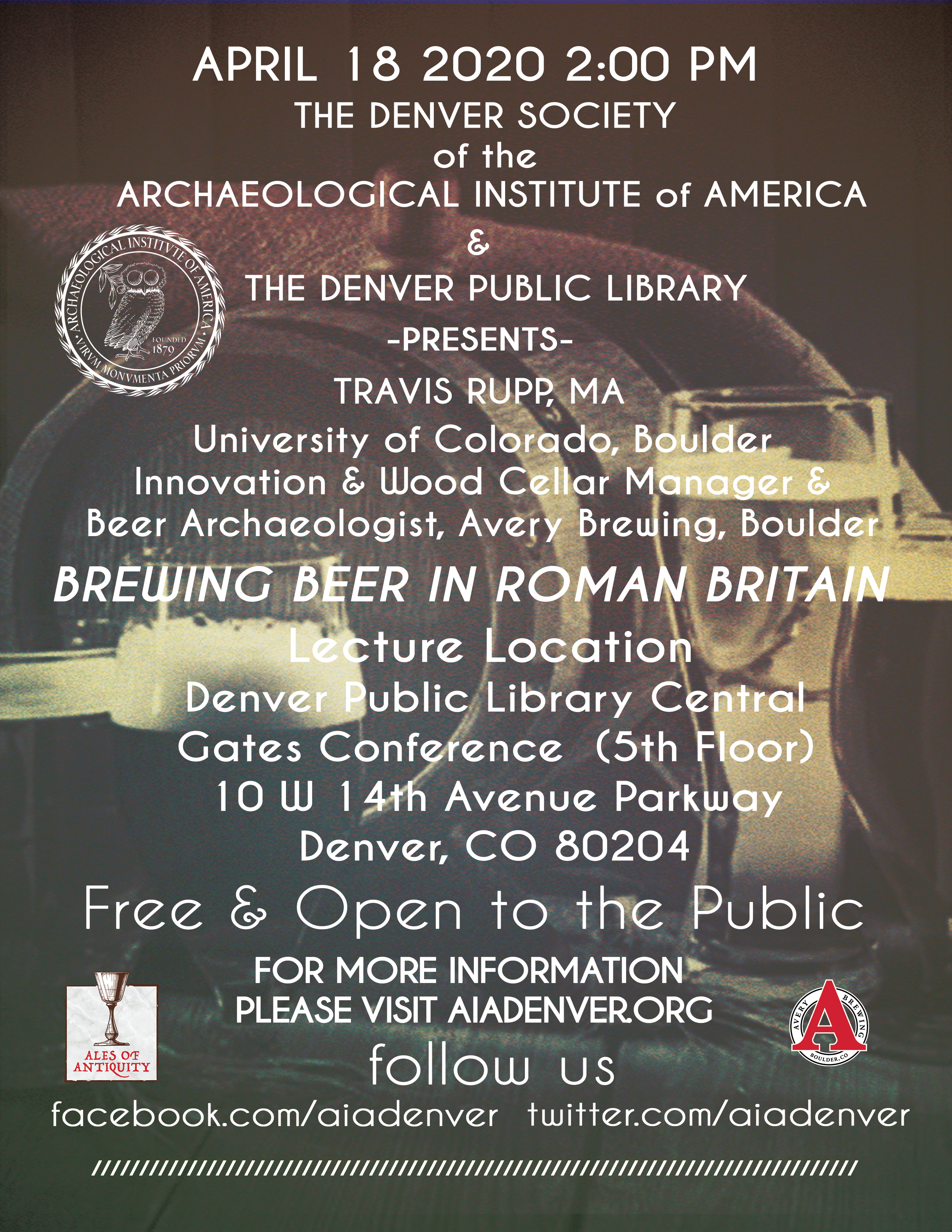 This lecture will explore the production and consumption of beer in Roman occupied Britain from the invasions of Julius Caesar through the end of Roman rule in the 5th century. Beer was the primary drink of early peoples and nations in Britain before Roman arrival. Via regular contact with other major empires and nations, beer styles and brewing methodologies expanded throughout Northern Europe as well. For example, Celtic contact with Britain significantly influenced how they produced beer. Though beer from these regions was often scoffed at and deemed inferior to wine, the “barbarians” of the north were not the only people consuming it. Archaeological and literary evidence supports the mass production of beer for Rome’s legions serving on Hadrianís Wall. This lecture will survey brewing at Vindolanda, Housesteads, and many other forts from the 1st and 2nd centuries CE. Large scale brewing coincided with the movement of the Roman legions, and new styles and flavors were created as Antoninus Pius pushed further north through the Midlands into Scotland. The construction of his wall promoted more brewing facilities, and the production of beer created a symbiotic relationship between the native brewers and the Roman consumers. These observations are witnessed in other regions of Roman provincial activity; an exploration of Roman castra and brewing facilities from Germanic territories in the late 2nd century CE will act as a comparative case study. This lecture will also present how beer was produced, what ingredients were used, how the beer likely tasted, and what (if any) traditions from the past are alive and well in British beer today.

Bio: Travis Rupp is the Innovation and Wood Cellar Manager at Avery Brewing Company in Boulder, Colorado where he has worked for 8 years and is responsible for Averyís beer invention, innovation, and barrel-aging programs. He holds the title of Beer Archaeologist at Avery as well and launched the Ales of Antiquity series in 2016. His academic past yielded degrees in†English, Secondary Education, and Ancient History from the University of Iowa. He completed a Post Baccalaureate in Classical Languages from Iowa and Notre Dame, and received an MA in Classical Archaeology and Art History from CU in 2010. As a result, he has been a lecturer of Classics, Art History, History, and Anthropology at the University of Colorado, Boulder since 2010 (and has been full-time since 2012) teaching all things Egyptian, Roman, and Greek. Yes, that means†two full-time jobs and a very understanding wife!
His wife, Sara Herkes, also graduated from the CU Classics MA program in 2011. As a result of his careers and passions, Travis is writing books on the beginnings of beer in the ancient Mediterranean, brewing in the early monastic tradition, and brewing during America’s Revolutionary War. Recently his travels and research abroad have focused on monastic brewing in Italy from AD 400-900, Swedish brewing in the 17th century, early Colonial Brewing throughout New England and Virginia, and brewing in Roman Britain.†He has recently been featured on CNN’s Great Big Story, CBS This Morning, NPR and in Southwest Airlines, Food and Wine, Zymurgy, and Thirst magazines. He is currently working on projects with Global Explorer (a partner of National Geographic) in India, Kazakhstan, Cambodia, and Uruguay.