This listing expired on October 30, 2019. Please contact altotejo@gmail.com for any updated information. 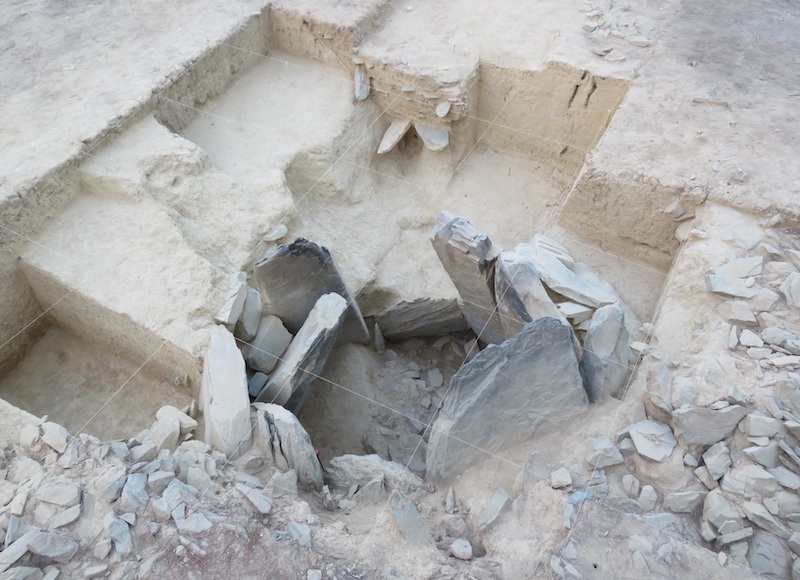 Following the work carried out in the last years, it is our purpose to continue the investigation of the building methods and funeral rites used for this dolmen with a chamber and nine slabs, already delimited on the surface and covered by a largetumulus (35 metres in diameter and almost 3.5 metres high).

Two other megalithic monuments were explored (Cão do Ribeiro, Vale de Alvito) which, like Cabeço da Anta, also form part of the in the footpath PR1 History in the Landscape.These three monuments were identified in the first half of the 20th century by the German archaeologist Georg Leisner and are included in the inventory Die Megalithgraber Der Iberischen Halbinsel, published posthumously in 1998 (Vera Leisner, Deutsches Archaologisches Institut, Walter de Gruyter. Berlin, New York).

Work done at Cabeço da Anta led to the characterization of several substructures, to a great extent due to the fact this monument was much better preserved than Cão do Ribeiro and Vale de Alvito.

The mound is very well preserved both in plan and height, being slightly higher than the top of the biggest slab. A few sampling trenches were opened in the mound, especially two radial sampling trenches with orthogonal directions covering all the mound, from the chamber to the periphery. Despite this planimetric cover, the excavation did not reach much depth, with the exception of the chamber area. The research has documented an extensive use of clay, but with a more complex vertical structuration than the observed at the other two monuments, and the inclusion of planar stone substructures very close to the top of the mound. The excavation of one of the trenches all the way down to the bedrock may reveal a more heterogeneous stratigraphy than what was perceived until the date, and such knowledge may contribute to recover important information about the original composition of the more eroded mounds. As the case of Vale de Alvito, mound’s stone peripheral markers appeared at the end of both orthogonal trenches.

Cabeço da Anta was made almost exclusively of metasedimentary rocks available locally, being scarce the use of filonean quartz, similarly to Cão do Ribeiro and Vale de Alvito. But one of the orthostats of the chamber, made of quartzite, had certainly a more distant origin, of at least 11 kilometres, what is indicative of a very exigent construction project.

We think the continuity of archaeological work at these megalithic monuments, notably Cabeço da Anta, reinforced by complementary physical, chemical, palaeoenvironmental, and archaeometric analysis, will be fundamental for a more profound knowledge of these megalithic architectures and associated rituals, funerary or not, and to a closer approach to the matrix and evolution of prehistoric settlement in this territory. This kind of effort was materialized through the development of a research programme covering all the Late Prehistory of the region: project “Mesopotamos”.

Minimum Length of Stay for Volunteers: one week

Room and Board Arrangements:
The fees include accommodation, meals (breakfast, lunch and dinner), transport for the whole programme (including days off) and documentation. There is free access to wireless internet hotspots at the accommodation (Seminary) and other areas (Cafeteria of the Urban Park). For participants from countries outside the Iberian Peninsula, the prices include translation to English and transport from Lisbon International Airport to CAPN (roughly 230 km), where appropriate.  Alternatively to the basic accommodation, CAPN may provide hotel accommodation (four stars) with breakfast, access to the pool, gymnasium and sauna (Hotel das Amoras), at an extra cost. Cost: One week: 400.00 €; Two weeks: 800.00 € Three weeks: 1200.00 €