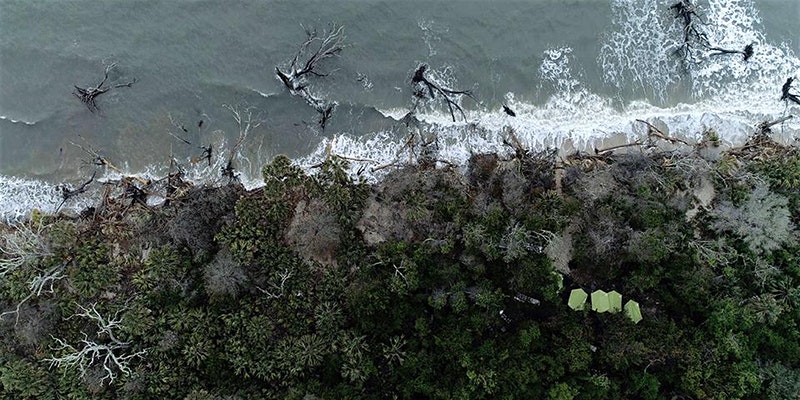 We are offering an advanced coastal field school (ANTH 520) this summer in South Carolina with the Indiana University of Pennsylvania (IUP) and South Carolina Department of Natural Resources (SCDNR) to document and excavate the remnants of two Late Archaic shell rings. It’s a great opportunity to develop your practical skills, interact with the public and volunteers, learn about coastal archaeology and cultures, and work with some excellent SCDNR professionals in the field.

The field session will consist of 3 weeks in the field (Edisto Island, SC, 11-29 May 2020).
Boarding and most meals will be provided
Non-IUP students must submit an application to IUP.
Course enrollment begins 26 March.
Summer tuition/fees information can be found online.

Pockoy 1 is the oldest known shell ring in South Carolina — dating to the Late Archaic period, approximately 4,300 years ago. That’s the same time period as the construction of the first Egyptian pyramids. While the two shell rings are considered one archaeological site, recent excavations have focused on Pockoy 1 since it is experiencing a rapid rate of erosion — about nine meters per year. Pockoy Island Shell Rings are among thousands of coastal archaeological sites threatened by sea level rise. It is because of this threat that Pockoy is considered an example of Heritage at Risk — a global term used to define cultural resources threatened by natural and human impacts. For nearly 70 years, Botany Bay Plantation has experienced one of the highest rates of erosion in coastal South Carolina. The shoreline has moved as much as three-quarters of a mile inland in some locations. Within the Southeastern United States, more than 19,000 recorded archaeological sites will be submerged by the end of the century with a one-meter rise in sea level. Unfortunately, Pockoy 1 will be gone by 2024. Rapid archaeological investigation of this site is critical as our shared cultural heritage is at risk of being lost. Pockoy 1 is one of the most intensely investigated shell rings in the world. Excavations of Pockoy 1 began in July 2017 with shovel testing and probing of the site. Shovel test pits (STPs) were excavated by hand every 30 meters across the site, and each STP was 30 centimeters in diameter and one meter deep. These STPs helped SCDNR archaeologists determine where larger excavation units and trenches should be located for future field seasons. Probing through the shell used to construct Pockoy 1 over 4,000 years ago helped SCDNR archaeologists determine the thickness and diameter of the shell ring. Pockoy 1 is in the shape of a doughnut, and measures about 60 meters across and 60 centimeters at its thickest point. The center of this doughnut shape is void of shell and is called the plaza.

Room and Board Arrangements:
Included courtesy of SCDNR