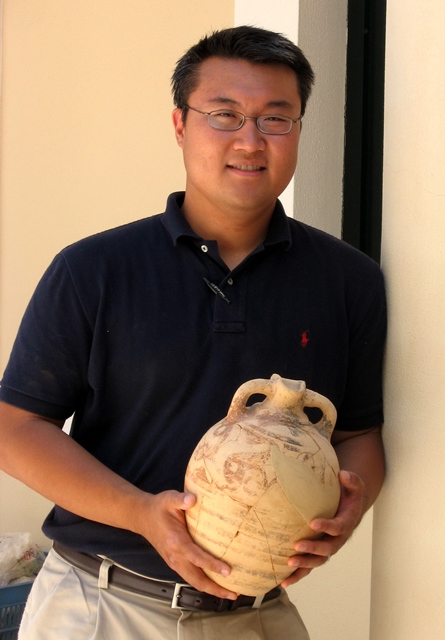 Dr. Andrew Koh is a Senior Research Fellow with the Massachusetts Institute of Technology, and a Research Associate with the Harvard Semitic Museum; he was formerly Assistant Professor and Director of Graduate Studies with the Department of Classical Studies at Brandeis University, as well as Affiliated Faculty with the Department of Anthropology and a Florence Levy Kay Fellow with the Department of Chemistry there. He holds his degrees from the University of Pennsylvania (Ph.D.) and the University of Illinois at Urbana-Champaign, and his areas of specialization are Greek art and archaeology, Aegean prehistory, Bronze and Iron Age Mediterranean, archaeological and conservation science, GIS, the cultural heritage of Crete, the Silk Road, ancient craftsmanship and commodities, and cultural hybridity.  Professor Koh’s publication projects include Luxury Trade and Social Complexity in the Ancient Mediterranean World (forthcoming, Cambridge University Press), and two volumes on the Cretan Collections in the Penn University Museum (Penn Museum Press, forthcoming).

A Land Called Crete: From Harriet Boyd Hawes to the Cretan Collections Project

Born in Boston on 1871, Harriet Boyd Hawes was introduced to the classical world by her brother and eventually earned a classics degree from Smith College. Encouraged to become a teacher or librarian, Hawes was nevertheless determined to overcome norms of the day to conduct archaeological fieldwork. Spurred by her father’s death in 1896, Hawes made her way to Greece and the American School of Classical Studies in Athens, where women were officially accepted if effectively marginalized. Awarded an AIA fellowship in 1898, Hawes spent the next two years soaking in everything Greece had to offer until Crete beckoned. Despite ongoing hurdles, the intrepid Hawes left Herakleion on April 1900 for East Crete and by the following year became the first woman to direct major excavations in the Aegean at Gournia (and address the AIA), inaugurating one of the most remarkable chapters in the annals of archaeological research.

Prior to Gournia, Hawes excavated a smattering of smaller Late Minoan III sites in East Crete. Overshadowed by Gournia, these eclectic, hybridizing finds from the Final Bronze Age have been largely forgotten. Mostly unpublished, they hold a major key to better understanding migrations and cultural interconnectivity (and societal reactions to these phenomena) during one of the best-documented and most disruptive cross-cultural mass events in ancient history – the Bronze Age Collapse. The Final Bronze Age in the Mediterranean was a particularly dynamic period characterized by displacement and turmoil as its mighty Bronze Age empires disintegrated. Crete has played a surprisingly minor role in reconstructions of Pan-Mediterranean narratives despite its central location and noteworthy documentary references, such as those that place it as a homeland of the Philistines. Thanks to the forgotten excavations of Hawes and her successors, the Cretan Collections Project through a blend of traditional and archaeometric analyses can now highlight the great potential these smaller LM III assemblages hold to unraveling the complex inter-regional connections that would help define a new world of emergent Iron Age cultural microclimates such as classical Greece.

Adams, A. 2010. Ladies of the Field: Early Women Archaeologists and Their Search for Adventure. Vancouver: D&M Publishers.

Despite its strategic location between Achaea and Boeotia, scholars of antiquity have overlooked the Desfina Peninsula in southern Phokis by assuming it has always been a relatively nondescript and arid pastoral hinterland. Yet recent studies by the Southern Phokis Regional Project suggest a more complex and networked reality in antiquity when its people drew inspiration from adjacent regions, but produced fine pottery of its own accord and buried their elites in the best Mycenaean traditions of the day as evidenced by remains of gold and literacy. This self-sufficiency was perhaps even necessitated by prominent geographic features (e.g. Corinthian Gulf, Peleistos River Valley) that naturally demarcate mountainous southern Phokis from its better-known neighbors and encouraged maritime exploits as evidenced by the Mycenaean coastal acropolis at Stenos.

This presentation addresses long theorized events such as famine that have come to explain the Bronze Age collapse, but are not easily discernible in the material record. Our preliminary study of the Desfina environment, buttressed by targeted excavations at the Late Helladic III citadel at Kastrouli, indicates that the high plain was more than a simple pastoral outpost supplying surrounding regions with livestock and held the potential for much greater socio-cultural complexity. Evidence for ambitious hydrological and transportation works projects (e.g., lake drain, Cyclopean road terraces) dispersed throughout coordinated intra-plain settlement pattern units verify that its Mycenaean residents had the technology and collective will to combat the aridification of the region throughout the 13th century BCE until Kastrouli was destroyed by more violent forces at the close of the Bronze Age (ca. 1200 BCE.). Combined with signs of continual occupation throughout antiquity helped by reusing these earlier Mycenaean devices, this new evidence not only lends credibility to the belief that the Desfina Plain was the home of the classical polis of Echedameia, destroyed by Philipp during the Sacred War, but also suggests that Kastrouli is the best candidate to be Homeric Anemoreia (Iliad 2.521) with its closely associated plain (Lycophron, Alexandra 1073).