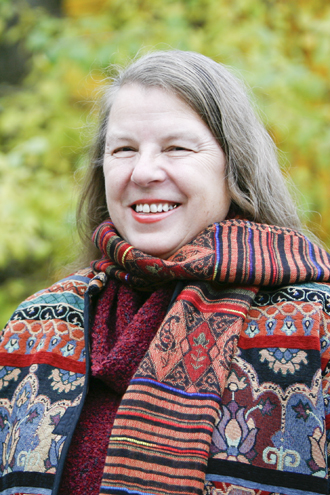 Ann Olga Koloski-Ostrow (fondly known to her students at Brandeis as Prof. AOK-O from her initials) has done fieldwork at Herculaneum, Pompeii, and in Jordan, and Tunisia, and survey work or archaeological study in Croatia, Cyprus, Egypt, Israel, Lebanon, Libya, and Turkey.  She works on Roman daily life, urban infrastructure, plumbing and hydraulics, baths and bathing practices, and toilets and sanitation.

She is Kevy and Hortense Kaiserman Endowed Chair in the Humanities at Brandeis University, Director of the graduate M.A. program in Ancient Greek and Roman Studies, and Head of the Division of the Humanities at Brandeis University.  She holds an M.A. in Latin and Greek language and literature and a Ph.D. in Classical Art and Archaeology from the University of Michigan.  A few of her publications: The Archaeology of Sanitation in Roman Italy: Toilets, Sewers, and Water Systems (2015, reissued 2018); Roman Toilets:  Their Archaeology and Cultural History (co-edited with Gemma Jansen and Eric Moormann, 2011); Water Use and Hydraulics in the Roman City (2001); Making Sense of Pompeii and Herculaneum: Daily Life and the Sensorium of the Roman City (Cambridge University Press, forthcoming); Sixty-Seven Toilets in the Ancient City of Rome: Sanitary, Urbanistic, and Social Agency, co-authored and edited with Gemma C. M. Jansen and Richard L. J. Neudecker (BABESCH, part of Brill Press, in Leuven, Belgium.); as well as volume 1 in the new Bloomsbury series, The Bloomsbury Cultural History of Technology, Pre-History through Antiquity (2.5 MBP-600 AD).  She is a contributor and co-editor to the Bloombury volume with Rabun M. Taylor.

She was the winner of the national award for Excellence in Undergraduate Teaching from the Archaeological Institute of America in 2016.  Her friends call her the “Queen of Latrines”.

This talk explores the sights, sounds, smells, tastes, and touch of ancient Roman cities (focus on Pompeii and Herculaneum, but reference to Ostia and Rome as well) using textual and archaeological evidence, in order to discover how we can identify the sensorium of the Roman city and how it can sharpen our understanding of life on Roman streets, in public spaces, and in private dwellings. We review the chief institutions and structures of the city to find the evidence: in the streets (dung, vomit, pee, shit, detritus, garbage, filthy water, fresh produce and baked goods); from inside tenement buildings (mould, damp basements, fires, charcoal, stagnant well water, overflowing cesspits); from shops (burning ovens, smoke, meat and vegetables); from live animals; from crowded public venues (including games in the amphitheaters, theaters, fora, and markets); from urban disasters (fires and floods); from inside public baths and toilets; from religious worship in and outside temples; and from the rituals associated with death and burial. Such an investigation into the sources and dissemination of the ancient sensorium revivifies the complexity of the ancient city and even contributes to a better understanding of urban zoning.