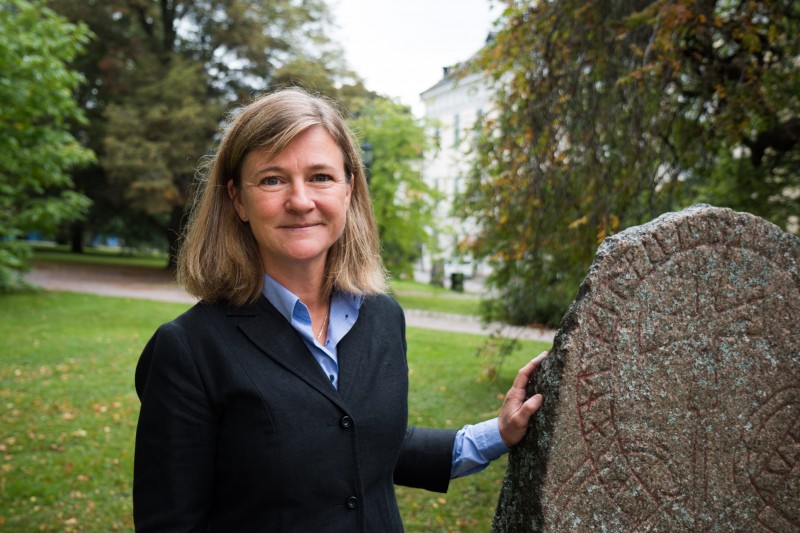 “I am a researcher and part of the Viking Phenomenon research project. I studied at the Archaeological Research Laboratory, Stockholm University, and presented a PhD thesis in 2006 on the Birka Warrior – the material culture of a martial society. With a background in field archaeology and as senior curator at the Swedish History Museum (SHM) I have held research fellowships at SHM, Stockholm University and the Römisch-Germanisches Zentralmuseum (RGZM) in Mainz. Previous research projects have focused on warfare, identities, mobility and material culture in Late Iron Age – Viking Age societies. Most recently I was part of the interdisciplinary ATLAS-project aiming at unravelling human prehistory within present day Sweden by combining archaeology, physical anthropology and genetics.

Within the Viking Phenomenon I coordinate work in the sub-project Viking Economics aiming at exploring the economy and organisation of Viking raids and their impact when shaping Scandinavian identities. Key issues relate to how the raids were structured, including comparative studies on piracy, what role women played and the importance of slave-taking and trafficking, both when raiding and in society at large. I will also further develop my own research on the movements along the eastern trade routes and the contacts between Scandinavians and various groups of the Eurasian steppe.”

Grave Bj 581: the Viking Warrior that was a woman

Grave Bj 581: the Viking Warrior that was a Woman

Grave Bj 581: the Viking Warrior that was a woman

Grave Bj 581: the Viking Warrior that was a Woman

In September 2017, the American Journal of Physical Anthropology (AJPA) published a paper under the title ‘A female Viking warrior confirmed by genomics’ (Hedenstierna-Jonson et al 2017). It presented the results of an extensive DNA analysis, following earlier osteological studies, showing that the body in a richly appointed Viking-Age burial from the town of Birka in Sweden was not biologically male as had always been assumed, but female. This was significant because the grave, which was excavated in 1878, had long been held up as the archetypal high-status warrior burial of the late Viking Age – an identity that had intriguing implications if applied to a woman.

The grave is one of approximately 3000 identified burials in Birka. Together they form what is perhaps the most striking archaeological feature of the site. The burial, situated on a promontory and highly visible both from the town and the surrounding waters, was marked by a large stone boulder. Constructed as an underground wooden chamber, it measured 3.45 x 1.75m. Within the burial, the deceased had been dressed in exclusive garments with silk and silver thread decorations and propped up in a seated position. The body was surrounded by weapons and framed by one shield at the head end and one at the foot end of the chamber. Most known types of Viking-Age weapons were present, making the collection a complementary set providing maximum efficiency in battle. Apart from the shields it included a sword, an axe, two spears, a fighting knife and a set of 25 arrows of an armour-piercing type. The bow, made of organic material, has since deteriorated, but there is an empty space alongside the body, next to the arrows, indicating where it may have been placed. A set of 28 gaming pieces and three dice were located in the lap of the deceased, and the possible remains of an iron-fitted gaming board alongside the body. In the foot end, and outside the actual chamber, two horses had been placed on a platform. Both were bridled for riding.

The grave immediately caught the attention of Viking scholars. The contents were spectacular, and the grave stood out even compared to other chamber burials in Birka in its explicitly martial character. It was interpreted as the burial of a high-status warrior and consequently sexed as male. The emphasis was on the warrior, the sex an assumption based on that interpretation. It was not until an osteological research project focusing on health issues in the earliest Scandianvian towns, recognized the remarkable combination of objects and biological sex was recognized. A new study was launched, including DNA and strontium isotope analyses (the ATLAS project). The questions concerned various aspects of who this person was during life, and a possible confirmation of the osteological sex assessment was only one part of the study. Others concerned the heritage of this evidently important individual, and her geographical movement. DNA proved the body to be biologically female, with a genetic background in the Viking World at large. It also showed that she was not local to the region in which Birka is located, but rather from southern Scandinavia. Strontium isotopes strengthened this picture, also showing that she had lived an itinerant life during her childhood and youth. Through osteology, we know that she was in her thirties when she died, a tall woman (1m 70cm), without visible trauma to the bones. Archaeology, in turn, shows a high-status individual dressed in a manner to suggest close connections to the eastern part of the Viking World, with parallels in present day Ukraine. An interesting picture is starting to emerge when all the pieces of data are combined. But is the standing interpretation of the grave as that of a high-status warrior still valid?