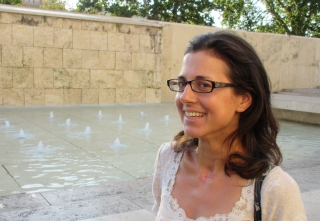 Darian Marie Totten is Assistant Professor of History and Classical Studies with McGill University, and holds her degrees from Stanford University (Ph.D.) and the University of Chicago.  Her areas of specialization are the economy and society of the Roman Mediterranean, late antiquity and the transition to the early Middle Ages in Italy, ceramic studies, and landscape studies.  She is currently a Co-Director of the Salapia Exploration Project, a comprehensive survey and excavation project designed to investigate both the human built landscapes and long-term environmental change of the Salpi Lagoon, along the Adriatic coast of Puglia, Italy

The ancient economies of a small port on the Adriatic: the case of Salapia (Puglia, Italy) from the 1st-8th c. CE

In this lecture, I sketch an image of the sequential economic lives at Salapia in the Roman and Late Antique and early medieval centuries (1st-8th  c. CE) through an analysis of evidence of artisanal spaces, ceramic wares, recent geomorphological and paleo-environmental analyses (conducted in collaboration) and the potential of its salty coastline.

The town of Salapia, located along the Adriatic Coast of Apulia in south-eastern Italy, is recorded by the architectural historian Vitruvius as the re-founding of the Daunian town of Salapia Vetus sometime in the 1st c. BCE. The siting of this new settlement along a lagoon was fortuitous: protected by dunes from the battering Adriatic Sea, it was afforded a natural harbor that offered the inhabitants a link to wider Mediterranean networks. This lagoon, at present, is one of the top sea salt producers in the whole Mediterranean Basin, and its medieval and early modern history is marked by evidence of coordinated curation and extraction of this resource; sparser ancient evidence points perhaps to similar circumstances in the Roman and Late Antique periods. The port and its salty resources would have impelled Salapia to connect to the outside world in intriguing and significant ways. A review of the imported ceramic wares -finewares and amphorae -over these centuries makes apparent not just into what networks Salapia was integrated but also the intensity of those connections. It is possible that Salapia was a clearinghouse and node for transport of Mediterranean products to the interior of the province of Apulia. For instance, even as the Roman empire was largely defunct by the 7th c. CE, and the town plan had unraveled, African finewares -albeit in reduced numbers -still made it into the hands of the town’s inhabitants, perhaps a residue of connections that were more apparent and strong in earlier centuries.

Analyses of features from the urban plan also give us a more comprehensive picture of the local economy at Salapia. A tannery, in operation from the 1st -4th c. CE, provides evidence of small-scale craft production in the fabric of the city and allows us to piece together the varied connections with the countryside that would have made such an artisanal installation possible. A taberna dated to the 4th-5th c. CE offers a picture of community connection around food and drink, while providing evidence of consumption of products both locally produced and from across the sea. Our analyses of Late Antique pottery have also made clear that the inhabitants of Salapia invested in a local production of painted table wares, illuminating telling patterns of production and consumption, starting in the 4th c. and continuing into the 7th c. CE.

New evidence from our geological and archaeobotanical collaborations gives a sense too of the relationship to the lagoon -how the coastline changed over nearly 1000 years from the Roman to the Medieval period, and the kinds of landscapes that surrounded the town of Salapia. We know better that vine and olive were central crops, and only increased in importance as the centuries wore on into the 6th and 7th c. CE. The presence of wood and pollen from evergreen and beech trees also paints a picture of a landscape dominated by pasture rather than grain farming from the Roman period onward. The inhabitants also probably relied on small gardens for their food, if 4th-5th c. CE deposits with melon and cucumber seeds are taken as representative of broader patterns.

From this data, we can not only reconstruct important aspects of daily life at Salapia, but also how a small port on the Adriatic was part of a larger network of connection.

In this lecture, the reuse and social meaning of the ruins at Salapia/Salpi create a continuous thread of history at the site from the Roman to present-day communities.

Salapia, a port-town on the Adriatic Coast of southeastern Italy, was founded in the 1st c. BCE and developed as a vibrant urban settlement, maintained into the mid-5th c. CE. Our excavations from 2014-2019 have identified the remains of an elite Roman domus, a tannery, a possible small bath, and a taberna, installed and then refurbished over five centuries. However, starting in the second half of the 5th c. CE, residents reoccupied the structures of Roman Salapia. Their walls and floors became a vital resource that the residents transformed to suit their needs. As a result, the skeleton of the Roman buildings encouraged the continued habitation of this coastal zone, all while influencing the spatial organization of the community over time. So, in the first centuries when Salapia was losing its urban character, the ruins of the Roman town played a central role in the making of later communities.

But such engagement was not limited to the 6th-8th c. CE. In fact, it persisted into the medieval period, when the standing remains of ruins were surely fundamental to building the town of Salpi, providing the material to construct the castrum podium that would support the new settlement. What is more, the buried remains of low walls were even robbed to provide building material for houses and other features. Thus, over the centuries, the inhabitants on this small corner of the Adriatic Coast made and re-made their communities, reemploying and even exhuming prior structures to do so.

Still today, the Monte di Salpi, an artificial “hill” that encapsulates the remains of the medieval town, provides a touchstone for the local community of Trinitapoli, the site of its earliest history and what it means to be a salinaro(inhabitant of the lagoon landscape). Our work, resurrecting these ruins through archaeology, has committed to making the local community a fundamental part of this conversation. It is clear to us that this is not a past “dead and gone”, but rather, that the archaeological remains form part of a living legacy in which Salapia remains relevant into the 21st century.