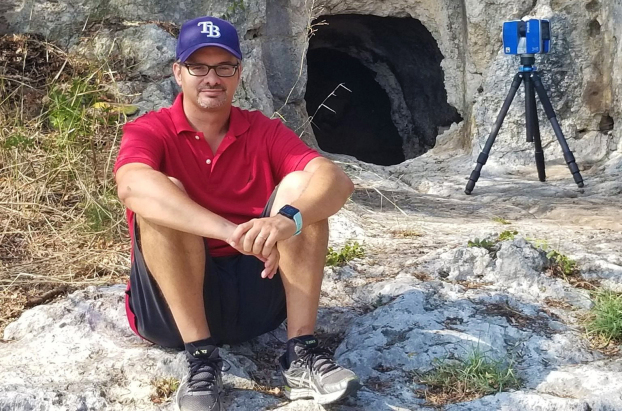 Davide Tanasi is Professor with the Department of History at University of South Florida, where he directs the Institute for Digital Explorations and he is P.I. of the Mediterreanean Diet Archaeology Project with the Institute for Advanced Study of Culture and the Environment. He specializes in application of innovative technologies for the study of archaeology of ancient Sicily and Malta. His researches in the fields of digital and biomolecular archaeology have generated groundbreaking results and numerous warmly received publications. In 2013-2015 he directed the excavations in the Roman catacombs of St. Lucy in Syracuse and since 2019 he is co-director of the Melita Civitas Roman project for the excavation of the Roman domus of Rabta in Malta.

Life and death of a Christian community in Roman Sicily: recent researches in the Catacombs of St. Lucy at Siracusa

The ancient Greek site of Heloros, named after the eponymous river (the modern Tellaro) and located south of the town of Noto, in south-eastern Sicily is mentioned only in passing in the historical sources. Founded at the end of the 8th century BCE as first sub-colony of Siracusa, Heloros developed from military encampment, placed in the middle of the indigenous territory, to a flourishing city state under its own right, laying the ground for the Siracusan expansion in south-eastern Sicily through the progressive foundations in the following decades of the Akrai, Kasmenae and Kamarina. Despite the excavations carried out in the early and mid-20th century, revealing a lively city, particularly in the Hellenistic period, along with massive fortification walls, a theater, an extensive sacred area, and some of the urban layout, Heloros is still the least known of the Siracusan sub-colonies. Due to a series of factors, as the fact that the ancient city has not been investigated with modern methods, the lack of an authoritative publication of the site, the scarce interest by non-Italian scholars, the poor digital presence of the archaeological site and its history and the technical difficulties to manage the vast area of the archaeological park and protecting it by the threats of illegal lootings, decades ago the site of Heloros was closed to the public falling into neglection first and then oblivion, becoming invisible. Against this scenario, since 2021, University of South Florida has worked on a research project focused on mapping and reinterpreting all the known monumental evidence through the lens of 3D digital mapping and visualization and remote sensing. Terrestrial laser-scanning, terrestrial and aerial digital photogrammetry and geophysical prospections have been employed to making visible all that became invisible and shedding light on the complex architectural histories of the city, with particular respect to its urban layout, fortifications and the sanctuaries of Demeter and Asklepios in the sacred area. Such heavily technology-oriented approach allows to “digitally excavate” the site bearing new data to interpret those parts of it already uncovered and preparing the ground for future new excavations.

The Catacombs of St. Lucy represent one of the oldest and most important monuments related to the Christian communities of Siracusa and Sicily in the Late Roman period. The name of the complex derives from the tradition that Saint Lucy, martyred during the reign of Diocletian in the early 4th century CE, was buried there. Beneath the modern homonymous square, a large underground cemetery slowly developed throughout the 3rd, 4th and 5th centuries CE, incorporating previous structures and hypogea used for funerary, cultural and industrial purposes that were then transformed into monumental burial chambers. The presence of the tomb of St. Lucy guaranteed a certain popularity to the complex even after the end of its use as a cemetery in the 6th century CE. The second largest catacombs in the city, St. Lucy’s was subject to exploration since the end of the 19th century, with major excavations conducted in the 1920s and 1950s in the four main regions in which it is divided (A-C). After a long hiatus in the archaeological investigations, new excavations and researches started in 2013 focusing on three still unexplored areas of the Region C with the goal to shed light on the complex history of the site, re-interpreting the pre-Roman structures incorporated in the underground cemetery and reassessing the Late Antique and Early Medieval phases of reuse. 3D digitization methods have been used to map the labyrinthine and multi-levelled cemetery, offering a clear view of its spatial development across several centuries, and to create 3D visualizations that guarantee virtual accessibility for scholars and the public to areas of the catacombs traditionally inaccessible. Bio-archaeological study and chemical and genetic analyses conducted on the skeletal remains of individuals identified during the excavations have produced significant novel data to assess the dietary habits, health status and living standards of a representative group of this Late Roman Christian community allowing for a reassessment of the limited evidence offered by the written sources.