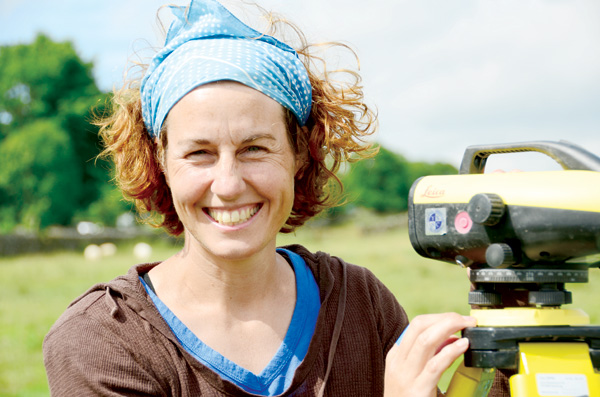 Elizabeth M. Greene is Associate Professor and Canada Research Chair in Roman Archaeology at the University of Western Ontario, Canada. She earned her PhD from the University of North Carolina, Chapel Hill in 2011, and since then has taught in the Classics Department at Western. Her excavation and research specialize in the Roman provinces and frontiers, with particular focus on Roman Britain and the dynamic military communities that inhabited the frontiers of the northwest provinces. Dr. Greene has been part of the archaeological team at Vindolanda on Hadrian’s Wall in northern England since 2002 and led the excavations in the North Field area of the site for a decade. She is currently the principal investigator of the Vindolanda Archaeological Leather Project and co-director of the Vindolanda Field School.

The People of the Roman Frontiers: Investigating multicultural populations in the western Roman empire through archaeology

Roman Footwear in Context: The assemblage of archaeological leather from Vindolanda on Hadrian’s Wall

In the past few decades the Roman fort at Vindolanda has had some of the most extraordinary finds from the northern frontier of the Roman Empire that have truly changed our understanding of life in the Roman army. The site lies near Hadrian’s Wall in a remote countryside in Northumberland, England and was part of the original frontier line in this location in the late first century CE. Decades of excavation at the site have given us an extraordinary view into the lives of soldiers living in this frontier region. Elizabeth Greene has excavated at Vindolanda since 2002, directing trenches in new areas of the site for several years, and will give a presentation focusing on the recent excavations and new hypotheses from this work. Highlights of the presentation concentrate on the extraordinary finds from the site, including Roman shoes, numerous inscriptions and artifacts, as well as the unparalleled corpus of writing tablets (letters and military records), to reveal what life was like on the edge of the Roman empire and how the site has changed many accepted views of life in the Roman army.

Research over the past few decades has shown quite clearly that women and children were part of life in the Roman army far more than had ever been considered before. The evidence and spatial patterning of material within and outside Roman forts makes this clear, but still research on the social role of these individuals lags behind. This presentation concentrates on Dr. Greene’s current research into this aspect of the Roman army, considering the evidence that illuminates the varied roles of non-combatants within these somewhat unique settlements. The presentation highlights the very different realities for the wives and children of officers and the family members of, for instance, a foot soldier, who was paid far less and was not legally allowed to contract a marriage while serving. This lecture follows on past talks I have given that present the archaeological evidence for the presence of women at Vindolanda and pushes the argument toward women’s social roles within military communities and the intersectional identities of those living in the Roman provinces and in military communities on the frontiers.

Greene, E.M. 2016. “Identities and Social Roles of Women in Military Communities of the Roman West,” in S. Budin and J. Turfa (eds.), Women in Antiquity: Real Women across the Ancient World (Routledge) 942-953.

Greene, E.M. 2014. “If the shoe fits: Style and function of children’s shoes from Vindolanda” in R. Collins and F. McIntosh (eds.), Life in the Limes: Studies of the People and Objects of the Roman Frontiers. Oxford: Oxbow. 29-36.

Think of everything we use every day made from plastic, rubber and industrial fabric—that’s how important leather was to the daily lives of the Romans in antiquity. The military fort and civilian settlement at Vindolanda near Hadrian’s Wall in Northern England has produced the largest assemblage of archaeological leather from anywhere in the Roman Empire (7,315 items and counting!). The assemblage includes around 5000 Roman shoes, as well as large items of military equipment such as tent panels and horse accoutrement, and smaller items such as patches, toggles, and production offcuts. This assemblage allows us to investigate in detail the construction of shoes in antiquity as well as the types, sizes and wear patterns on Roman shoes. Since leather is almost never preserved in the archaeological record, this assemblage is extremely important to understand what we’re missing from typical archaeological environments. This talk will introduce the audience to the assemblage of archaeological leather from Vindolanda and discuss some of the amazing and unique finds that have emerged from the site, as well as the rare archaeological environments that preserve leather in such a pristine state. Elizabeth Greene has worked at Vindolanda for nearly twenty years, focusing her research on the leather assemblage for over a decade, and will share her first-hand experience with this important assemblage of archaeological material.

Greene, E.M. 2019. “Metal fittings on the Vindolanda shoes: Footwear and evidence for podiatric knowledge in the Roman world,” in S. Pickup and S. Waite, Surveying Shoes, Slippers and Sandals in Antiquity. Routledge. 310-24.

Greene, E.M. 2014. “If the shoe fits: Style and function of children’s shoes from Vindolanda” in R. Collins and F. McIntosh (eds.), Life in the Limes: Studies of the People and Objects of the Roman Frontiers (Oxford: Oxbow)

The process of Roman conquest was violent, deadly and devastating to local ways of life. In the wake of conquest and imperial control we find new settlements with military and civilian populations, reorganized landscapes and intense movement of peoples around and through the Roman provinces. Recent trends in research of provincial and frontier archaeology have highlighted the very individual nature of responses to conquest and the need to consider local situations within a broader framework. To this end, microhistories of individual sites and landscapes have proven fruitful when set into a broader regional and sometimes global context. This talk will present one of those microhistories from the site of Vindolanda, where a population of soldiers, families, merchants and travelers lived for hundreds of years on the northwest frontier in Britain. The site is particularly useful for understanding the earliest phases of settlement after conquest in the late first and early second centuries, through the writing tablets, footwear and wooden objects preserved in anaerobic conditions on site. The picture of life in this settlement that results is far more robust than typical archaeological environments allow and we are able to understand a great deal about individuals and their histories. Elizabeth Greene has excavated and researched the material culture at Vindolanda for nearly twenty years and will draw from that experience to present a vivid picture of the people of the Roman frontiers.