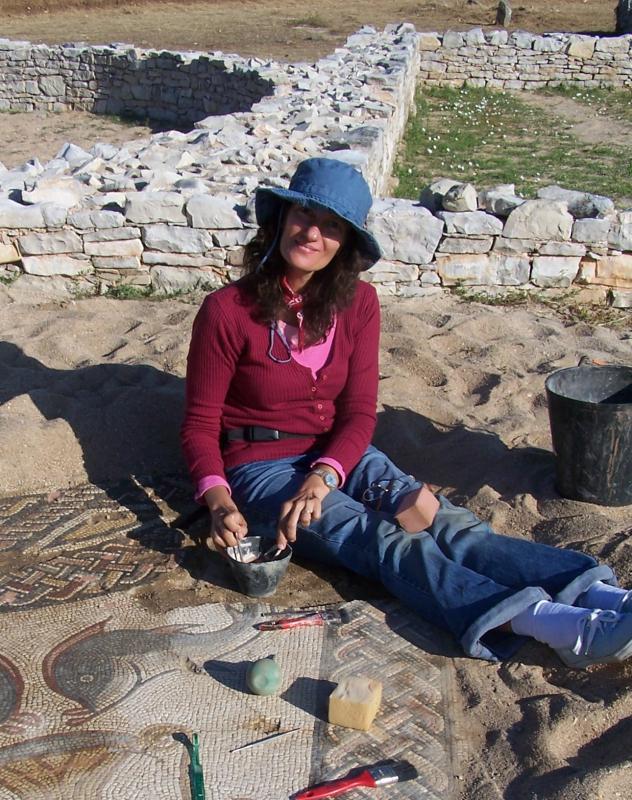 Dr. Limão is Postdoctoral Research Fellow with the Instituto de História da Arte at the Universidade Nova in Lisbon, and Coordinator of the academic project ENCONTRHARTE (Encontros de História da Arte da Antiguidade). She holds her degrees from the Universidade Nova, and her research interests are architecture, sculpture, painting and mosaics in Classical and Late Antiquity, particularly as are found in Portugal. Dr. Limão strongly believes in the value of investigating the history of art, and how this aids communication: it enlightens the understanding of our contemporary world.  She works on using innovative audio-visual media to provide a new view of Antiquity, and to allow greater access to scientific issues.  Dr. Limão is an AIA Kress Lecturer for 2018/2019.

Troia is the name of a sandy peninsula located in the southwestern Atlantic coast of Portugal, on the left bank of the river Sado, where, in Roman times since the first century CE, an important industrial complex emerged.  However, the name Troia was never mentioned in the ancient sources in contrast with Caetobriga (nowadays Setúbal), a Roman city in the mainland facing Troia pointed by Ptolemy in Geography ( II, 5, 2) and quoted in the Antonine Itinerary (XII). By the end of the 15th c CE, the name Troia was well-known and the ruins of this ancient settlement in the peninsula were just about to be discovered. During the 16th c CE, enthusiastic Portuguese scholars described places and wrote historical narratives of Lusitania (understood as Portugal) making reference to events dating far back in time, as the ones related to the ancient city of Troy. This could  have inspired an erudite speculation relating the name of the mythic Troy with Troia, two places lost in time.

This lecture aims to question what Troia may have been in Roman times besides being a noteworthy center for the production of salt fish goods as proven by the extensive workshops in the place. The current archaeological site of Troia also preserves baths, insulae, domus, diverse funerary monuments and an early christian basilica (second half of the 4th c CE), with painted walls. A bas-relief of the god Mithras, a sarcophagus, some sculpture and a composite capital reused in a domus ladder step, are just some more pieces of a vast history worth unveiling. Our aim is to better understand whether the strategic location of Troia may have allowed it to become a confluence place of people, ideas, religion, artistic trends, material resources.

During Late Antiquity (6th c CE), Troia slowly declined and was forgotten until the Modern times. The discovery of Tróia and the development of studies in the field of archaeology and art history nowadays, are expected to shed light in the understanding of the role of Troia in the dynamics of the Roman province of Lusitania.

Website Encontrharte ( History of Art Meetings): a vídeo with images of Troia: