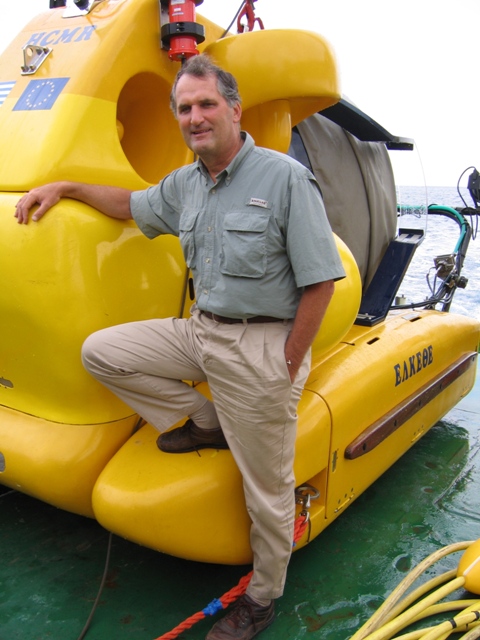 Dr. John R. Hale serves as Director of the Liberal Studies Program and the “Individualized Major” in the College of Arts & Sciences at the University of Louisville, Kentucky.  He is also an Adjunct Professor of Archaeology in the Department of Anthropology.  John Hale earned his B.A. in 1973 at Yale University (Major: Archaeology), and his Ph.D. at Cambridge University in England (Dissertation: “Bronze Age Boats of Scandinavia”).

Professor Hale has more than 35 years of archaeological fieldwork experience, including excavations and surveys of sites around the Ohio River Valley, at the ancient Romano-British town of Dragonby in Lincolnshire, England, and at the Roman villa (and stud-farm) of Torre de Palma in Portugal.  He has also carried out interdisciplinary studies of ancient oracle sites in Greece and Turkey, including the famous Delphic Oracle.  Since 1995, Hale has been a member of an interdisciplinary consortium that is developing methods for using Carbon-14 analysis to date concrete structures from the Roman Empire and medieval Europe.

In the area of nautical archaeology, Hale helped launch a search in Greek waters for lost trireme fleets from the time of the Persian Wars.  He has mapped a submerged Maya ceremonial center in Lake Atitlan, Guatemala, and has surveyed and excavated Roman and Arab shipwrecks around the ancient harbor of Caesarea Maritima, Israel.

At the University of Louisville, Hale teaches introductory courses on Archaeology as well as more specialized courses and Honors Seminars on the Bronze Age, the ancient Greeks, the Roman Empire, Celtic civilization, Vikings, “Sacred Sites” in global perspective, and his own field of Nautical and Underwater Archaeology.  He has previously taught classes at Indiana University Southeast in his home town of New Albany, and also at Yale University.  At UofL, Hale has received awards for distinguished teaching that include the Panhellenic Teacher of the Year Award and the Delphi Center Award.  As a member of the Archaeological Institute of America he served as an AIA Norton Lecturer in 2009/2010, and an AIA Joukowsky Lecturer in 2017/018.  Some of these courses, as well as his course on “The Art of Public Speaking”, are now available in the catalogue of “Great Courses” sold by The Teaching Company Inc.

John Hale has published reports on his work in the journals Antiquity, The Classical Bulletin, The Journal of Roman Archaeology, Radiocarbon, and Scientific American.  Several of his projects have been featured in the “Science” section of The New York Times by science reporter William Broad.  Hale is also the author of Lords of the Sea (Viking/Penguin 2009), a history of the ancient Athenian navy and the birth of democracy.

From Mastodon Hunters to Moundbuilders: The Peopling of North America

The Treasures of Caesarea Maritima

Greek Triremes & the Origins of Democracy

Ancient Greek and Roman authors stated that the Apollo’s sacred oracle at Delphi in central Greece was located at the site of unusual geological features an phenomena: a chasm or fissure in the rock; an emission of sweet-smelling vapor or gas; and a sacred spring.  The priestess who pronounced the oracles, known as the Pythia, sat on a tall tripod above the fissure where she could inhale the vapor, thus triggering a prophetic trance in which she could serve as a medium for the prophetic oracles of the god Apollo.  So great was the influence of the woman’s words that scarcely a colony was founded or a war undertaken in Greece for over a millennium without the sanction of the Delphic Oracle.  Famous figures from Oedipus and Agamemnon to Alexander the Great and various Roman emperors consulted the shrine.

During the 20th century, most scholars adopted a skeptical attitude towards the ancient traditions about Delphi, denying that there had ever been a fissure or a gaseous emission in the crypt of the temple.  However, in 1995 an interdisciplinary team was created to study not only the archaeology of Delphi, but also the evidence from geology, chemistry, and toxicology that related to the oracle.  The results of the research vindicated the ancient sources.  Our team has gone on to study Greek oracle sites elsewhere in the Aegean and Asia Minor, where we have found similar geological features.

Viking ships are among the most remarkable artifacts in the entire realm of archaeological discovery, dominating European history for the three centuries between 800 and 1100 AD.  As warships they terrorized coasts from Scotland to the Mediterranean; as trading craft they ventured down the rivers of Russia to Byzantium, and as vessels of exploration and colonization they crossed the open Atlantic to Ireland, Iceland, Greenland and ultimately America.  Yet all these amazing achievements were accomplished by open, undecked ships with a few oars and a single square sail.

The 19th century witnessed dramatic finds of royal Viking ships in Norwegian burial mounds along Oslo fjord.  More recently, underwater archaeologists have recovered virtually intact Viking ships from harbors in Denmark.  The most ambitious project in the field of experimental archaeology has involved the reconstruction and sea trials of many Viking ship types.  John Hale has traced the ancestry of Viking ships all the way back to sewn-plank canoes of the Scandinavian Bronze Age, and shows the links between these remarkable ships and the watercraft of the Pacific and central Africa.