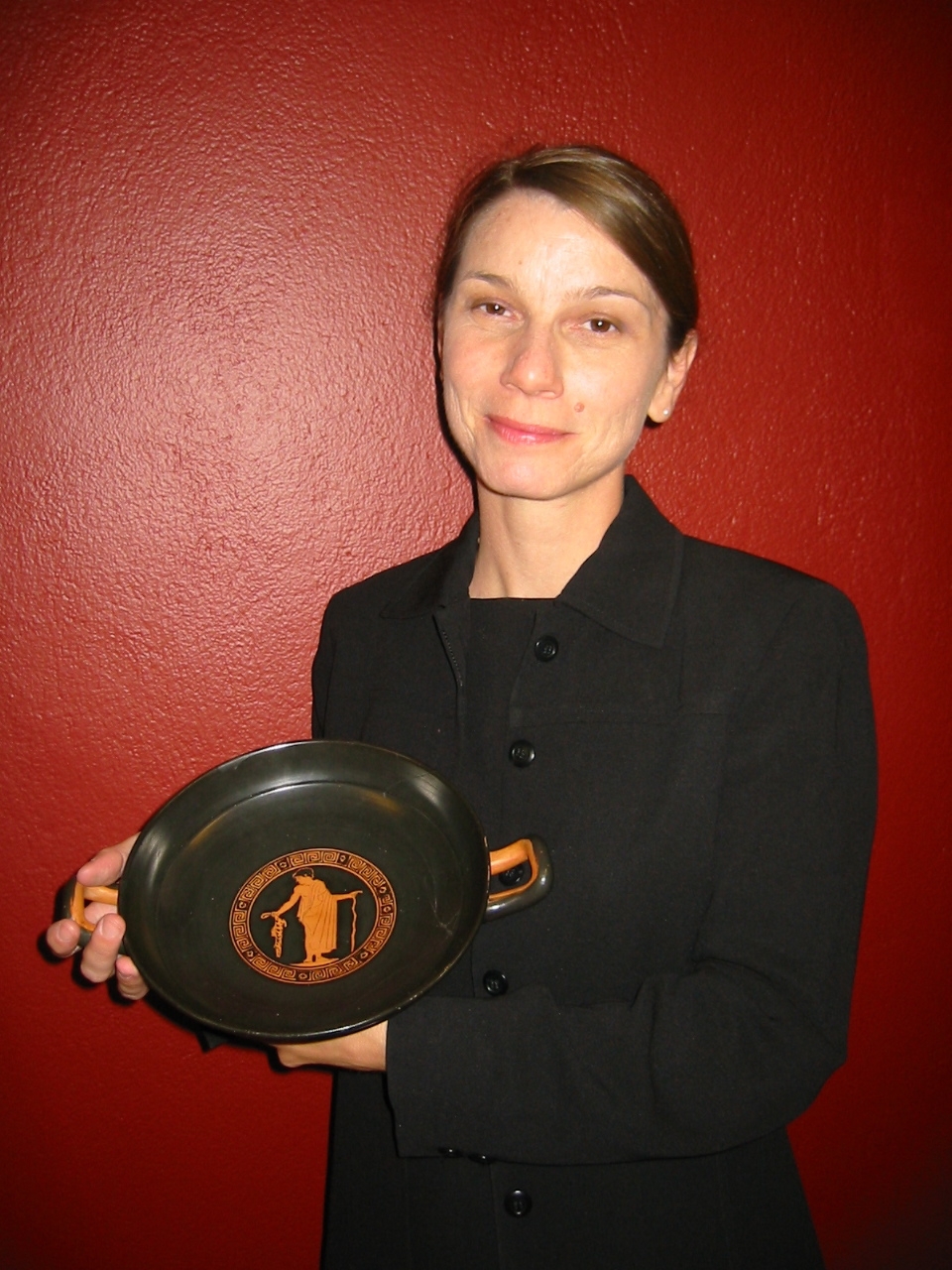 Kathleen Lynch is Professor of Classics at the University of Cincinnati, and has also taught at Washington University in St. Louis, Southern Illinois University, and the University of Missouri. She is a specialist in Greek pottery, particularly vase-painting and the social aspects of pottery, and has completed fieldwork in Albania, Greece, and Turkey. She earned her Ph.D. and her M.A. at the University of Virginia, after completing her undergraduate work at Boston University. She has published widely, and has received numerous awards, grants and fellowships for her work.

One of Professor Lynch’s main publications is The Symposium in Context: Pottery from a Late Archaic House near the Athenian Agora, published as Hesperia supplement 46, 2011, and the recipient of the 2013 AIA James R. Wiseman Book Award. This volume addresses for the first time a collection of pottery used at symposia that has been found in a domestic context in Athens (rather than a funerary context, which is more usual for such pottery). In the volume Professor Lynch discusses form, function, and context without ignoring the social aspects of Athenian drinking parties as well as other household activities.

The Symposium in Context: Pottery from a Late Archaic Athenian House

This lecture will explore how the foreign market for Athenian vases impacted production choices of the Athenian potters. In order to provide a vivid example of the problem, we will first examine erotic images of heterosexual couples on Athenian black-figure and red-figure vases produced from about 525-450 B.C. While these pots are certainly made in Athens, they are found only in Etruria. We will consider why the Athenians marketed these images to the Etruscans, and in turn why the Etruscans may have appreciated them. No clear answers exist, but considering intention and reception of the images does underscore that the Athenian potters were businessmen who aimed to sell pots.

In order to understand how the export market differed from the domestic pottery market, we will also examine pottery found in genuine Athenian houses. It turns out that pottery used by Athenians had simple, “genre” scenes. There is no sign of heterosexual intercourse and very few examples of mythological scenes.

Finally, we will review some famous Athenian vases that were found in Italy, mainly in Etruscan tombs.

The symposium was a small, all-male drinking party held in a private home, and it was most popular from the Archaic to the Hellenistic period with some significant changes in form and meaning along the way.

The symposium focused on the shared consumption of wine. Men gathered in a small room, reclined on their left elbows, and participated equally in both the drinking and activities. All men were expected to speak on topics of philosophy and politics in turn or contribute to songs and stories. The wine loosened inhibitions and made it easier for the drinkers to form bonds.

Sympotic drinking required specialized ceramic equipment, designed only for use in the symposium. This paper will discuss the sympotic set from an Athenian house near the Classical Agora. It is the first well-preserved sympotic set from an individual house, so it provides the first evidence for the importance of the symposium in a real Athenian house. In fact, the sympotic pottery accounted for nearly 50% of this house’s crockery. The iconography on the sympotic pottery tells us something about the homeowner who chose the pots: he had a sense of humor, and he had an interest in cattle.

*This is the subject of the author’s AIA 2013 Wiseman Award publication, The Symposium in Context.

A. Dalby, Siren Feasts: A History of Food and Gastronomy in Greece, Routledge, 1996.

B. Sparkes, The Red and the Black: studies in Greek Pottery, Routledge, 1996.

In early modern times, Chinese potters produced figure decorated porcelain in a range of shapes specifically tailored to export markets. The design, production, and export of these vessels is well-documented with contemporary literary accounts—both Chinese and foreign—and even contemporary drawings of the production process. In the 6th and 5th centuries B.C., Athenian potters produced figure-decorated pottery, some of which seems to be tailored to export markets. In this talk, we will explore how the model of Chinese export pottery may help us understand Athenian vase production for export. In contrast, we know little about the logistics or organization of Athenian pottery production and its trade beyond what we can glean from the pots themselves. Chinese porcelain and its export, then, provides some valuable parallels that may help explain Athenian export strategies.

In particular, we will examine the impact of the consumer’s tastes on Chinese porcelain production. European customers, for example, wanted practical western forms that featured authentically “Chinese” imagery. As a result, potters made export porcelain in shapes and with decoration that would never have been used domestically in China. Similarly, there is evidence that the Athenians also modified shapes and imagers to suit the tastes of their consumers. We will explore the possibility that the export market shaped Athenian vase imagery more than previous noticed and consider what this means for our study of Greek vases.

See Kathleen Lynch's work in the American Journal of Archaeology.