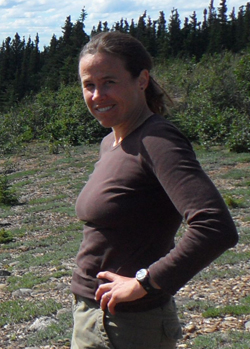 Kelly Graf is Associate Professor of Anthropology at Texas A&M University, and she holds her degrees from Southwest Missouri State University and the University of Nevada (MA and PhD).  Her areas of specialization include the dispersal of modern humans in northern environments, the peopling of Northeast Asia, Beringia, and North America, Upper Paleolithic and Paleoindian archaeology, and hunter-gatherer ecology and adaptation in extreme environments (arctic and arid).  Professor Graf is currently directing and co-directing several field-based and lab-based projects in Siberia, Alaska, and the Great Basin, all focusing on initial human dispersals in these regions.

Both ancient-genome studies and modern-DNA research have shown that the homeland for the first Americans was Beringia (i.e., region of the Bering Land Bridge) and ultimately Siberia. Peoples from Northeast Asia dispersed to Beringia both before and after the last glacial maximum (coldest part of the last glacial cycle, 26,000-20,000 years ago). The process of successfully dispersing to and settling the far north conditioned when and how the Western Hemisphere was colonized, and the archaeological records of these northern areas are key in providing much of the on-the-ground support of models explaining when and how dispersal occurred.

In this lecture, I present how the archaeological record informs on the timing and process of initial dispersals to North America through these northern regions. This presentation is informed by my own research in Siberia and Alaska as well as the work of many other colleagues tackling the problem. The lecture will first present the current model of dispersal proposed by geneticists. Then it will present the archaeological record of sites from Siberia and Alaska, such as Mal’ta, Yana RHS, Swan Point, and Dry Creek, as well as McDonald Creek, a newly discovered Alaskan site currently being excavated. Finally I will consider how these two sets of data fit together to explain the process of colonization and future directions the research should head to further explore the problem of the peopling Siberia, Beringia and the Americas.

Graf, K. E., T. Goebel (2017) The Paleolithic of eastern Beringia from western Alaska to the Canadian Yukon. In Human Colonization of the Arctic: The Interaction Between Early Migration and the Paleoenvironment, ed. by V. M. Kotlyakov, A. A. Velichko, S. A. Vasil’ev, pp. 311-338. Academic Press, London.