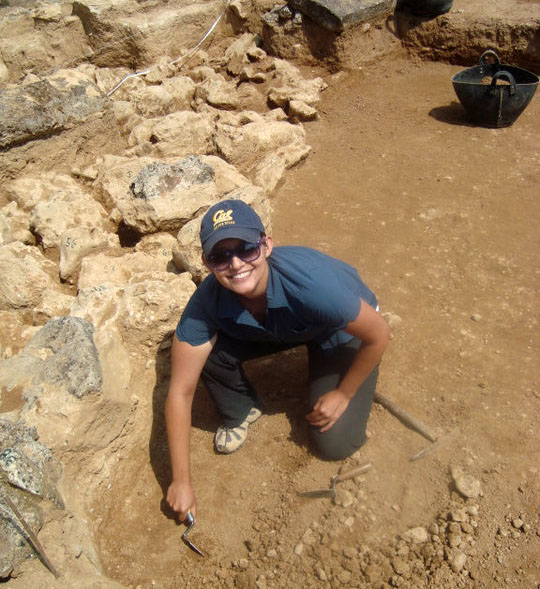 Lissette Jiménez is Assistant Professor in Museum Studies in the School of Art at San Francisco State University and served as Interim Director and Associate Curator for the Badè Museum of Biblical Archaeology (Pacific School of Religion). She holds her degrees from the University of California, Berkeley (M.A. and Ph.D. in Near Eastern Studies with an emphasis in Egyptian Art and Archaeology) and Columbia University. She has conducted archaeological fieldwork in Egypt, Greece, and Italy. Currently, she is Associate Director of Museum Archives and Exhibits for the Abydos Temple Paper Archive Project and Field Director of the Abydos Archive Conservation Field School, a collaborative project between the Egyptian Ministry of Antiquities, UC Berkeley, SF State, and Egyptian colleagues that provides hands-on conservation training to Egyptian museum staff and inspectors. Her research interests include museum and curatorial studies, postcolonial and decolonial museum theory, gender and childhood in ancient Egypt, and ancient Egyptian art and archaeology, with a focus on Greco-Roman Period commemorative funerary practices and material culture.

Shrouded in Mystery: Reconstructing the Cultural Contexts of Funerary Shrouds from Roman Egypt

The Sixth Sense: Multisensory Encounters with the Dead in Roman Egypt

The Sixth Sense: Multisensory Encounters with the Dead in Roman Egypt

"Harm is what befell me, when I was but a child!": Commemorating Children in Greco-Roman Egypt

Funerary shrouds, often overlooked or dissected into dichotomous parts because of their Hellenistic and Egyptian hybrid visual nature, provide unparalleled insight into religious and social facets of life and death in Roman Egypt. Moving beyond the aesthetic properties of these objects and focusing on the symbolic and magical functions of the imagery on the shrouds enables a fuller understanding of individual and collective social aspirations of the population. By placing the shrouds in their Egyptian contexts and by analyzing both the physical portrait of the dead and the surrounding iconography, one can comprehend how death was both physically and visually translated within an ancient multicultural context.

Jiménez, Lissette M. forthcoming. “The Sixth Sense: Multisensory Encounters with the Dead in Roman Egypt” in The Routledge Handbook of the Senses in the Ancient Near East, edited by Kiersten Neumann and Allison Thomason, Oxford, UK, and New York, USA: Routledge.

Textual, archaeological, and visual material culture have offered valuable clues to the experiences and characteristics of lived childhoods in Greco-Roman Egypt. In particular, child mummies and their accompanying funerary goods indicate how children were perceived and commemorated in death during the later stages of Egyptian history. In particular, funerary images of children preserved in mummy masks, portraits, and painted shrouds from the Ptolemaic and Roman periods illustrate the social realities of childhood in Egypt. Iconographic representations of clothing, hairstyles, jewelry, and inscriptions demonstrate not only the social status ascribed to young individuals, but also the special attention given to the commemoration of deceased children as individuals, mourned and celebrated after death by their families and wider communities. More specifically, these funerary images of children reveal how children’s bodies were utilized as symbolic foci in mortuary practice to mitigate tears in the social fabric caused by premature death. This lecture will provide further insight into the lives and deaths of children and how they were perceived by adults in Greco-Roman Egypt.

Jiménez, Lissette M. 2021. “From Birth to Rebirth: Perceptions of Childhood in Greco-Roman Egypt.” In Children in Antiquity: Perspectives and Experiences of Childhood in the Ancient Mediterranean edited by L. Beaumont, M. Dillon and N. Harrington. London and New York: Routledge.

Parca, M. 2013. “Children in Ptolemaic Egypt: What the Papyri Say.” In The Oxford Handbook of Childhood and Education in the Classical World, edited by J. Evans and T. Parkin, 465-483. Oxford: Oxford University Press.

Pudsey, A. 2013. “Children in Roman Egypt.” In The Oxford Handbook of Childhood and Education in the Classical World, edited by J.  Evans and T. Parkin, 484-509. Oxford: Oxford University Press.

Elaborately decorated funerary shrouds were used in religious funerary rituals and placed over the mummified body of the deceased throughout the Roman Period. These representations of the dead reveal how gender was used to associate the transfigured deceased with aspects of deities such as Osiris, Isis, and Hathor. Examples of funerary texts and inscriptions, written specifically for women during the Ptolemaic and Roman Periods, associated some females with Osiris or a composite form of Osiris-Hathor—occasionally alternating between them in different passages of the same text. This lecture examines engendered expressions of self-presentation within the limits of a mortuary context and specifically investigates the iconography and composition of funerary representations of deceased individuals on the funerary shrouds. An analysis of magical texts, inscriptions, and representations of women in particular adds a new comparative dimension arguing that gender relations were dynamic—being made and negotiated through material resources—and that ancient Egyptian funerary shrouds in the Roman Period provided the ideal medium for the final eternal expression of gender.

In recent years, museums across the world have been challenged to decolonize their institutions. By reevaluating museum practice and thinking critically about what it actually means to decolonize museum spaces, we need to ask what is involved in decolonizing museum practices? Also, on a much more basic level, what is colonialism and how is it manifested in museums? This lecture will address these questions—and more specifically—address the long and complicated role colonialism has played with respect to early 19th century collecting practices of ancient Egyptian objects and their display in museums. I will propose that archival research, education outreach, and collaboration are several ways we can begin to break down colonial hierarchies in museums and initiate the decolonization process of ancient Egyptian museum collections and the study of these collections. More specifically, I will focus on my archival research and educational curriculum development on the Egyptian collection at San Francisco State University and on the collaborative archival and museum professional training efforts of the Abydos Temple Paper Archives Project in Egypt.