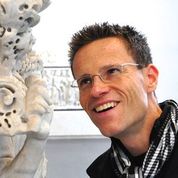 Mont Allen is Associate Professor of Classics and Art History at Southern Illinois University.  He holds degrees in Art History (Ph.D.), European History (M.A.), and Geography (B.A.) from U.C. Berkeley, and in the History of Religion (M.A.) from Syracuse University.  His areas of specialization include Greek and Roman funerary sculpture, ancient sculptural tools and techniques, Greek mythology, Roman painting, and Late Antique religions.  Professor Allen is a recipient of his university’s Outstanding Teacher of the Year Award (2018).  His book on the strange disappearance of Greek mythological scenes from Roman coffins during the third century — titled The Death of Myth on Roman Sarcophagi: Allegory and Visual Narrative in the Late Empire — is currently in production with Cambridge University Press.

When Gods and Heroes Retreat: The Death of Myth on Roman Sarcophagi

When Gods and Heroes Retreat: The Death of Myth on Roman Sarcophagi

A strange thing happens to Roman sarcophagi of the Late Empire:  their mythic imagery vanishes.  These lavishly carved coffins had featured bold mythological scenes since the very beginning of their mainstream production early in the second century AD, when burial had replaced cremation as the favored means for disposing of the dead.  Evocative testament to Rome’s ongoing love affair with classical Greek culture, they derived visual force from their resonance with an artistic tradition centuries old while providing catharsis and consolation to those still living.  How then to make sense of this imagery’s withering and final abandonment on later sarcophagi, as mythological narratives were truncated, gods and heroes were excised, and genres featuring no mythic content whatsoever came to the fore?

That it must represent a major shift in the cultural values of the Late Empire is a given, given the central position that sarcophagi occupied in the Roman visual imagination.  But no consensus exists regarding its significance and the factors that may have driven it.  Did it perhaps reflect the growing strength of Christianity?  The political disenfranchisement of Rome’s old elite?  The cultural illiteracy of its new?  A desire for scenes of peace and tranquility as antidotes to the horrors of the Third Century Crisis?  An eagerness for imagery more finely tuned to status display?  A trivialization of myth caused by its excessive use?  Or something else entirely?

Jonah reclines on the beach, stark naked, eyes closed in slumber, while the sea monster that just vomited him forth hulks before the sleeping prophet, his serpentine neck and ferociously toothed maw a reminder of what Jonah has just escaped.  Carved on numerous Roman coffins between roughly 270 and 315 AD, it was the earliest, and most popular, motif for Christian sarcophagi before Constantine.

That the prophet’s languid pose was modeled on that of Endymion, the handsome shepherd who caught the eye of Selene in Greek myth, is widely acknowledged.  But why do these early Christian works so often show the sea monster extending a front limb to glance Jonah’s own leg, as if lasciviously caressing the prophet’s thigh, while Jonah throws his head back in ecstasy?  Are we really supposed to think that the monster is friskily set on love with the open and waiting prophet?  How are we to make sense of this in a Christian context, in a funerary context, in any context?

Unpacking this unexpected motif will provide insight into a host of issues:  not only into the commemorative habits of early Christians, their use of pagan models, and their particular interest in Jonah (why was he so popular for the funerary setting?), but also into the carving habits of sarcophagus workshops, the size of Rome’s Christian clientele, and the pregnant question of who, exactly, whether pagan or Christian, sculpted these works.