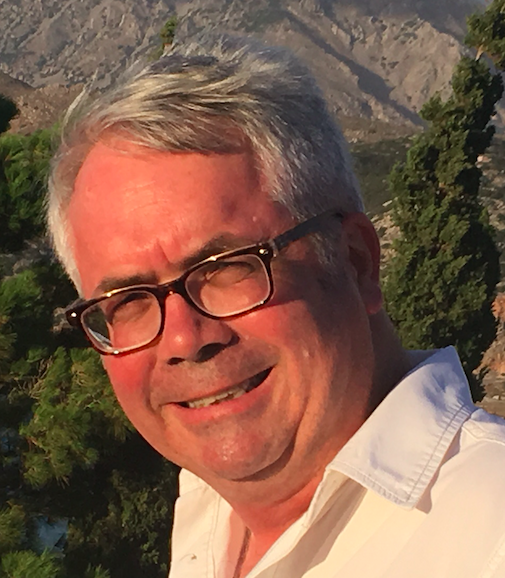 Dr. Thomas M. Brogan is the Director of the INSTAP Study Center for East Crete.  He holds his degrees from Bryn Mawr (Ph.D. and M.A.) and Wabash College.  His areas of specialization are Aegean prehistory, particularly Minoan material culture (pottery, weights, and architecture), Minoan households, maritime communities and craft production, and Hellenistic art and iconography.  He has been an active member of several excavations in east Crete during the past twenty years, primarily at Mochlos where he has been the assistant director since 1992.  Dr. Brogan has published widely, and received numerous awards for his work, and was a 2019/2020 Joukowsky Lecturer for the AIA.

An Archaeology of the Bronze Age Senses: the tastes, smells and colors of new finds from east Cretan excavations

Twenty Years on Crete: The Impact of the INSTAP Study Center

An Archaeology of the Bronze Age Senses: the tastes, smells and colors of new finds from east Cretan excavations

My lecture reviews recent excavations at Bronze Age sites in East Crete supported by the Institute for Aegean Prehistory Study Center for East Crete (INSTAP SCEC), paying particular attention to new evidence for craft production. Interestingly enough, the finished goods are not the pots, the metal tools, and stone vases that we typically associate with artisans at work in the Minoan palaces and houses on Crete. Instead, Greek and American excavations are using detailed recovery methods to record the food and drink of Bronze Age farmers and fishermen and the aromas and the colors of Minoan fashion.  The paper is thus an exploration of the Minoan Senses—the tastes, the smells and the sights of Bronze Age Crete.  It focuses less on artifact type, provenience, and date, and more on the everyday activities and the lifestyles of the occupants of LM I towns in east Crete.

We will examine finds from three Late Minoan towns: Papadiokambos (dug from 2007 to 2012), Mochlos (2004-2005) and Chrissi (from 2008-2018). The site of Mochlos is well known, but the other towns are new, only discovered in the past decades.  Finds at these sites include unusually rich remains for the production and consumption of food and beverages and much rarer evidence for the manufacture of aromatic oils and deep purple dyes.

Brogan, T., C. Sofianou, J.E. Morrison, D. Mylona, and E. Margaritis. “Living off the Fruits of the Sea: New Evidence for Dining at Papadiokampos, Crete,” in Diet, Economy and Society in the Ancient Greek World: Towards a Better Integration of Archaeology and Science (Pharos Supplement 1), S. Voutsaki and S.M. Valamoti, eds., Leuven, pp. 123–132.

Since 1997 the Institute for Aegean Prehistory Study Center (INSTAP SCEC) has worked closely with the Greek Ministry of Culture, Institute for Aegean Prehistory (INSTAPP, and several projects of the American School of Classical Studies to develop a comprehensive approach to excavation, study and heritage management.  While archaeology has long stressed the importance of temporal or material changes, archaeologists have also started drawing attention to significant changes in the way we approach and recover the past.  My lecture considers the evolution of the INSTAP Study Center in this light and its efforts to meet the emerging needs of the wider archaeological community on Crete and in the Aegean. A selection of the major discoveries by our projects serve as illustrations.

Our foundation’s primary goal has always been helping excavators prepare ancient material for study and publication, often in collaboration with our partners the Wiener Laboratory for Archaeological Science and the INSTAP Academic Press.  Together these institutions represent the pioneering vision of Dr. Malcolm Wiener, an American philanthropist and distinguished Aegean Prehistorian.  In 1997 our foundation served as the base for 4 surveys and 4 excavations of the American School of Classical Studies (some in collaboration with members of the Greek Archaeological Service).  By 2018, we were assisting many more ASCSA projects and had expanded our staff and facilities to help colleagues in the Greek Ministry of Culture and several foreign schools and Greek universities.  On Crete during this period we hosted approximately 150 projects with 1500 members and 250 individual scholars.  Since 1999 the INSTAP Publication Team extended these services to an even wider community (ca. 40-70 projects per year) working on Crete, the Greek Mainland and Islands, Cyprus and Turkey.

The final step in this heritage paradigm concerns efforts to share new discoveries from the Greek past with the wider scholarly community and the local and foreign lay audience.  This work includes the Study Center’s Newsletter, KENTRO, and our annual summer lecture series. Every year the staff also provide tours to student groups from Greek, European and North American Universities and at least 10 schools in the Ierapetra Municipality.  We also work closely with the Lassithi Ephoreia to improve public access to finds on display and sites where we work. We are proud of all these efforts because they have the potential to impact the widest audience and bring a degree of closure to the projects we have supported.

A recent Heidelberg dissertation surveyed the use and settlement history of the small peripheral islands around Crete.  The author, Kostas Halikias, presents a compelling hypothesis that settlement on all 6 of Crete’s small islands exhibits strong “patterns of insularity, isolation, and intensive interaction with the communities of the mainland. His survey of one of these islands, Chryssi, and the opposite Ierapetra coast identified three periods of intensive interaction or what Rainbird and Broodbank call “connectedness.” These occurred in the Neopalatial phase of the Bronze Age, the Late Hellenistic Period, and the Roman Era that were preceded and punctuated by long periods of isolation and abandonment (e.g., 1400-150 B.C.)

For the purposes of this lecture, I focus on Bronze Age insular activity and more specifically the archaeology of a Minoan maritime community on Chryssi. I begin with a brief review of Crete’s island histories to set the stage for the story.  According to Rainbird, the moment when this contact shifted from visitation to habitation is of considerable interest to all island studies. For Crete signs of increased activity appear on all the peripheral islands in the Protopalatial period as palaces emerge on the Cretan mainland and begin exploiting the available resources and harbor locations on these small islands

Recent excavations of the largest settlement on the island of Chryssi in 2008-2009 and again from 2015-18 have uncovered a specialized maritime community active for a period of 200-400 years from Middle Minoan II-Late Minoan IB and provide significant new evidence for its organization and dependence on major settlements on mainland Crete. The results, which include the clearest context from the Mediterranean for the production of dye from purple shells, also offer interesting perspective on different scales of the Minoan palatial economy: at the level of household, community, and region and new insight into maritime trade routes and exchange networks.

Chalikias, K. (2013) Living on the Margins. Chryssi Island and the Settlement Patterns of the Ierapetra Area, Crete (BAR)