Alaska to Russia: Beyond the Bering Strait 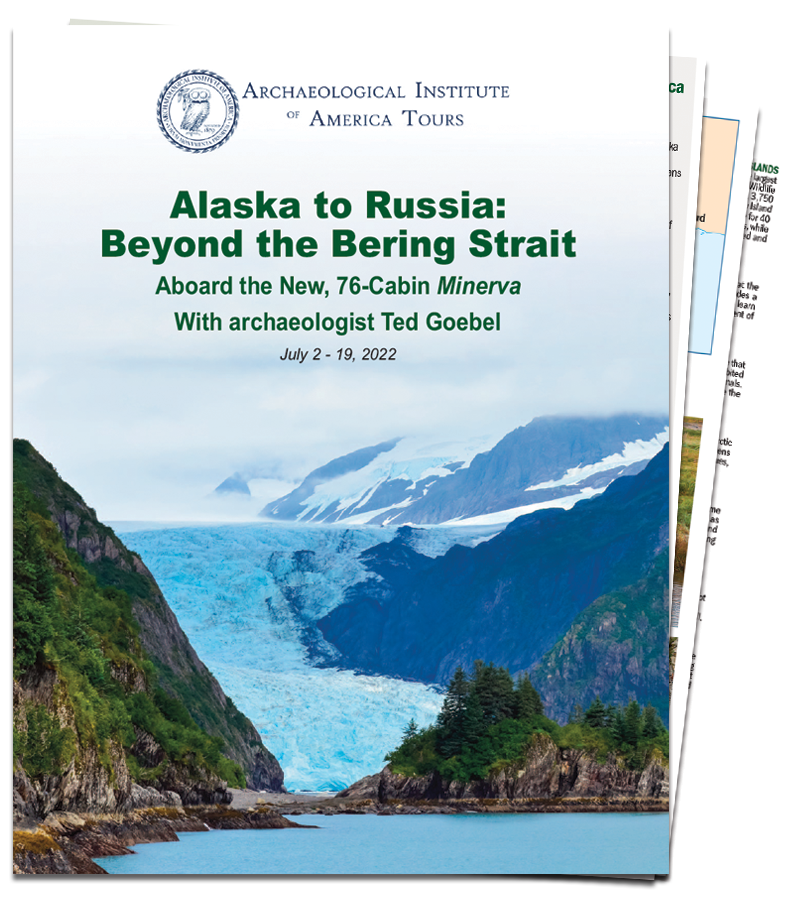 Next summer join AIA lecturer and host Ted Goebel, an expert on the origins of the First Americans, on an extraordinary voyage to the Bering Strait, separating Alaska and Russia by just 51 miles. Enjoy the comfort of a luxurious expedition ship while exploring remote areas far away from tourist routes.

Begin your epic adventure in Anchorage, then embark your 76-cabin ship in picturesque Seward, cruising through the Kenai Fjords National Park with its calving glaciers and breaching whales. Kodiak Island is home to the massive Kodiak brown bears plus several species of salmon and 250 bird species, including bald eagles. Then explore the Aleutian archipelago and the Pribilof Islands, spotting the abundant and diverse wildlife such as Tufted puffins and walrus.
Isolated and accessible only by special permission until recently, few travelers have ever visited East Siberia, one of the world’s great wilderness regions, home to the indigenous Siberian peoples. Covered in ice for most of the year, the land wakes up during the brief summer to reveal its unique flora and fauna amidst volcanoes and hot springs. Admire more marine birds and whales as well as the lush tundra dappled with wildflowers. 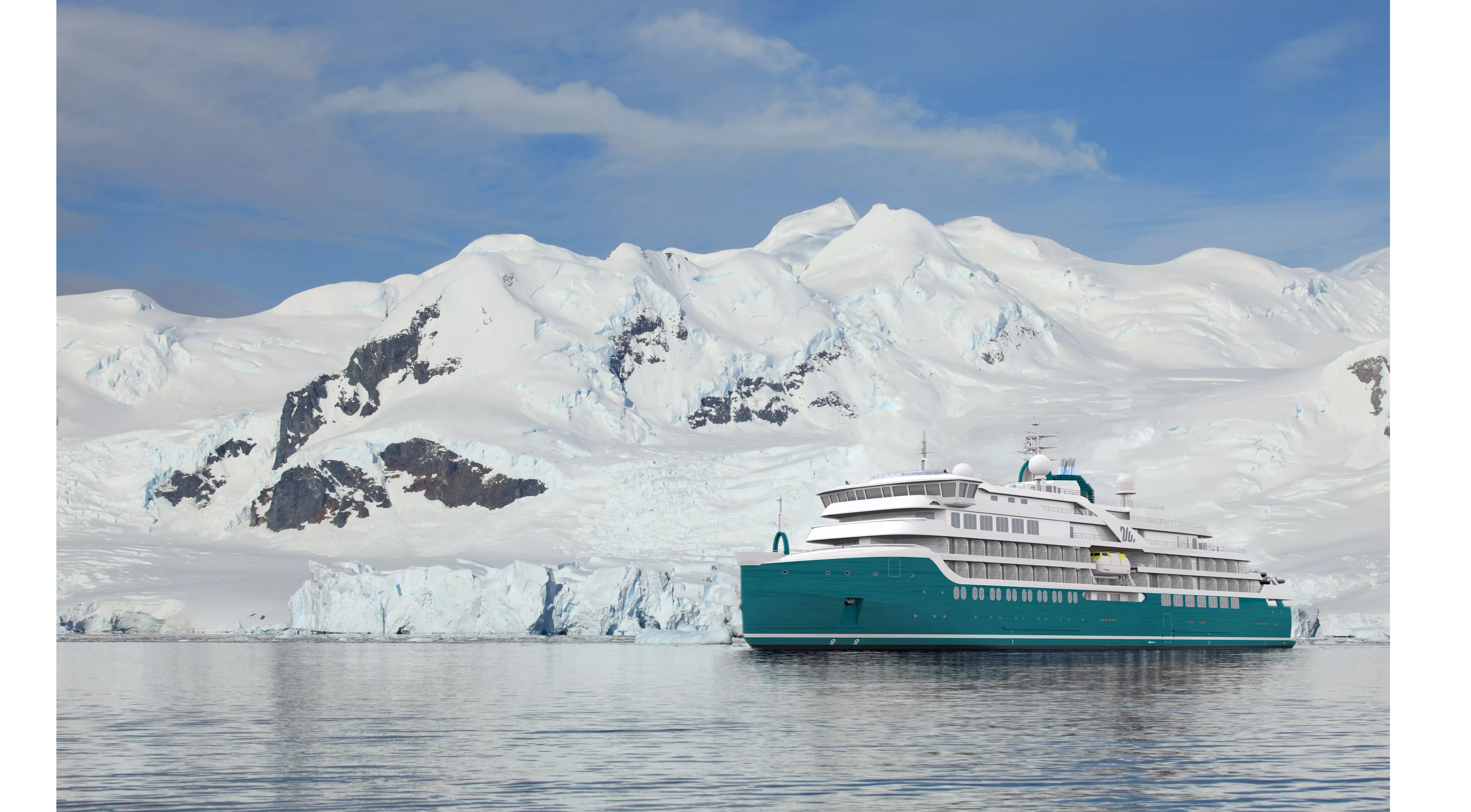 Under construction in Finland and launching in October 2021, Minerva is designed specifically for exploration cruising. Enjoy the luxurious amenities of this new, state-of-the-art expedition ship with just 76 staterooms and suites for 152 guests. The ship’s size; limited guest capacity; superb accommodations and public spaces, facilities, and services; advanced technical and mechanical systems; and a complement of experienced officers and crew make Minerva the ship of choice for exploring Earth’s remote places in safety and comfort.

A fleet of Zodiac landing craft will bring you into intimate contact with the places we will explore. We hope you will join our AIA lecturer/host on this once-in-a-lifetime travel adventure. I encourage you to contact AIA Tours today to reserve
your preferred cabin type, since this program is co-sponsored by other organizations.

Rates start at $15,790 for detailed information and download the complete brochure here.

Saturday, July 2, 2022: ARRIVE IN ANCHORAGE, Alaska
Arrive in Anchorage and transfer to the Sheraton Anchorage Hotel & Spa (or similar). In the evening, enjoy a welcome dinner at the hotel. Meals: D

Sunday, July 3: ANCHORAGE / SEWARD / EMBARKATION
In the morning visit the Anchorage Museum, whose excellent exhibits chronicle the history and heritage of the people of Alaska from the ancient past to more recent times. In the early afternoon, drive along the scenic Seward Highway to the port town of Seward, beautifully located on an inlet on the Kenai Peninsula, where we will embark Minerva and cruise. Meals: B, D

Monday, July 4: HOLGATE GLACIER & CHISWELL ISLANDS
View the spectacular Holgate Glacier in Kenai Fjords National Park. Listen for the thunderous sounds of incredible calving glaciers reverberate across the waters. Up close to this huge glacier, a spectrum of colors play on the ice as nearby seals lounge on the ice floes and gulls fly all around. Attend 4th of July celebrations aboard the ship. Meals: B, L, D

Tuesday, July 5: LARSEN BAY, KODIAK ISLAND
Set in a spectacular valley off a narrow fjord and within Kodiak Island’s National Wildlife Refuge, Larsen Bay is a 2,800-square-mile refuge of diverse habitat. There is the opportunity to see mighty Kodiak brown bears, deer, sea lions, seals and eagles. In 1991, the Smithsonian Institution returned the remains of 756 Alutiiq Natives. Learn about the burial that marked the largest repatriation of Native remains ever conducted by the Smithsonian. Meals: B, L, D

Wednesday, July 6: CASTLE BAY, ALASKA PENINSULA
Castle Bay features a high skyline of surrounding stratified rock, rugged mountains, pinnacle formations, and sandstone towers that gave the area its name. These towering peaks give out different shades in their layers which makes the whole bay distinctively entrancing and act as a famous landmark to ships navigating nearby. Meals: B, L, D

Thursday & Friday, July 7 & July 8: UNGA ISLAND & DUTCH HARBOR, ALEUTIAN ISLANDS
Unga Island is now uninhabited, but you will see remnants of its past in the relics of a gold mine and collapsed houses overgrown with beautiful and bright wildflowers. The picturesque Aleutian Island has a rare and ancient petrified forest that is beguiling to witness. Along the cliffs, double-crested and pelagic cormorants, common murres, and peregrine falcons glide, dart, and dive. Dutch Harbor was one of the few sites to suffer from aerial bombardment in World War II and you can still see concrete bunkers and former gun emplacements. The native Aleut people have inhabited this area for around 9,000 years but the strong influence of the Russian Orthodox Church can be seen in the characteristic onion domes. The sprightly arctic fox and bright-beaked horned and tufted puffins are all residents here. Meals: B, L, D

Saturday & Sunday, July 9 & July 10: ST. PAUL ISLAND / ST. MATTHEW ISLAND, PRIBILOF ISLANDS
The island fictionalized in a scene of Rudyard Kipling’s The Jungle Book, St. Paul Island is the largest of the Pribilof Islands. It is a birding migratory capital – part of the Alaska Maritime National Wildlife Refuge – and it is a breeding ground for more than half a million northern fur seals. Until c. 3,750 BC, the Woolly mammoth roamed these plains. A remote island in the Bering Sea, St. Matthew Island is recovering its tundra following the uncontrolled release of caribou that were a feature here for 40 years. Massive cliffs give shelter to Brünnich’s guillemots, parakeet auklets, and glaucous gulls, while on land arctic foxes move stealthily through plants regaining a hold such as pacific silverweed and purple saxifrage. Polar bears have been known to make an occasional visit. Meals: B, L, D

Monday, July 11: PROVIDENIYA, Russian Siberia
Provideniya, the gateway to Russia’s Far East Siberia, is a former Soviet military port, built at the head of a bay that marks the southern limit of the Arctic ice pack. Tour the town that includes a small museum charting the history of the town and the indigenous Siberian Yupik people. To learn more about the history, culture, and traditions of the Yupik, we will visit the nearby settlement of Novoye Chapino, which overlooks a picturesque fjord. Meals: B, L, D

Tuesday, July 12: NAUKAN & UELEN VILLAGE
Visit the abandoned settlement of Naukan, then on to Uelen, the only Yupik village on the cape that is still inhabited. Archaeological work has revealed that the area around Uelen has been inhabited for at least 2,000 years, with the people depending on fishing and hunting of marine mammals. Uelen is an art center, widely famed for its walrus ivory carvings. During our visit, we will have the opportunity to meet with some of the master carvers. Meals: B, L, D

Wednesday, July 13: KOLYUCHIN ISLAND / AT SEA
Cruising through the Bering Strait, Minerva will enter the Chukchi Sea, the southern area of the Arctic Ocean. At Kolyuchin, conservationists will join us for a tour, pointing out rare wildflowers, lichens and mosses. The island also features spectacular bird cliffs inhabited by puffins, thick-billed mures, pelagic cormorants, kittiwakes, and other seabirds. Meals: B, L, D

Thursday, July 14: LAVRENTIYA
Lavrentiya is an important village to the Chukchi Yupiks. Close to the Bering Strait, this is the home of the Beringia Regatta and Festival which brings together athletes to compete in events such as bidarka (walrus skin boat) racing, alongside cultural group performances. Among colorful red and green houses is the village’s museum with a significant collection of indigenous artifacts reflecting traditions and spiritual culture. Close by are the Lovino hot springs, which we will visit. Meals: B, L, D

Friday, July 15: PROLIV SENYAVINA HOT SPRINGS & YTTYGRAN ISLAND
Take our Zodiacs to a small lagoon, which leads to attractive Proliv Senyavina Hot Springs. After exploring the area, those who wish may take a dip in the pool, which is heated with the natural hot springs. Continue to nearby Yttygran Island to visit Whale Bone Alley, an archaeological site comprised of 600-year-old whale bones erected to form archways, some of them over 15 feet tall. Meals: B, L, D

Saturday, July 16: NUNLIGRAN
Visit the settlement of Nunligran, a Chukchi village near Lake Achchen where sockeye salmon come to spawn. Thousands of nesting seabirds – northern fulmars, murres, black-legged kittiwakes, herring and glaucous gulls, pelagic cormorants – roost along the craggy cliffs while ringed seals haul out along the coastline. This is a place where Chukchi people traditionally hunted for whales and walrus. Watch for harbor porpoises; white, minke and bowhead whales; and bearded and spotted seals. Meals: B, L, D

Sunday & Monday, July 17 & July 18: SIRENIKI / PROVIDENIYA
Sireniki is one of a handful of traditional Siberian Yupik villages that remain along the southern coast of Chukotka. Traditionally reindeer herders and whale and walrus hunters, the Sirenik Yupik also had their own Eskimo language, but this has died out. Our Zodiac excursions take us alongside the cliffs where murres, kittiwakes, long-necked black cormorants, stiff-winged fulmars, glaucous gulls, and little auks come to nest. Dock in Provideniya to formally depart Russian territorial waters, en route to Nome. Meals: B, L, D

Tuesday, July 19: NOME, Alaska / DISEMBARKATION
Arrive in Nome in the morning and transfer to the airport for return flights home. Meals: B