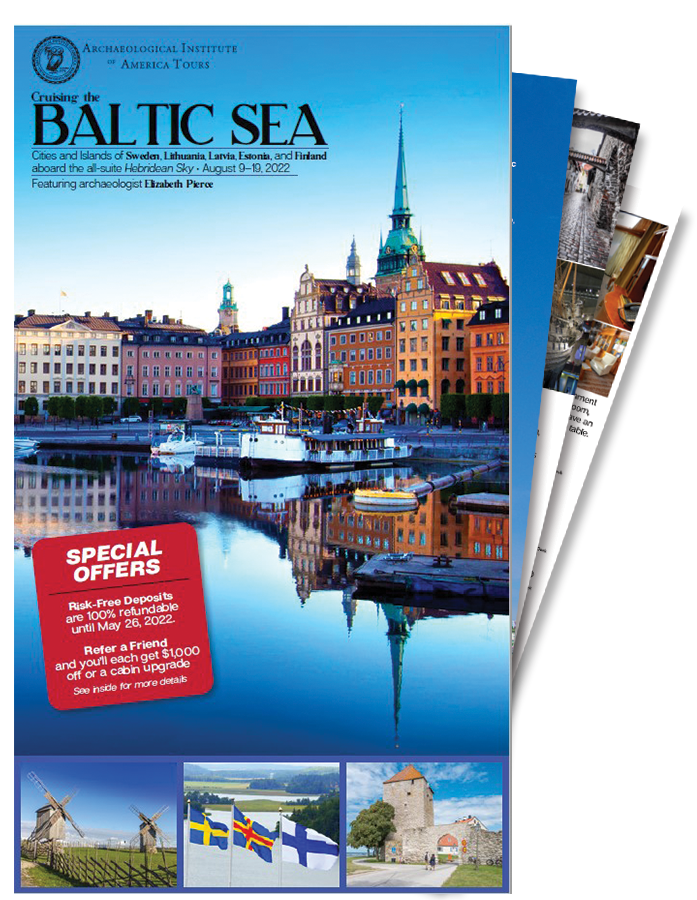 Cities and Islands of Sweden, Latvia, Estonia, Lithuania and Finland aboard the all-suite Hebridean Sky

The height of summer, when sunlight extends into the evening hours and temperatures are mild, is the ideal time to explore the nations bordering the Baltic Sea. On this journey, we will have the good fortune to visit five of these nations aboard the all-suite, 59-cabin Hebridean Sky.
The scope of the experience will be grand, from the stylish capital cities of Stockholm and Helsinki to the quaint islands of Gotland, Saaremaa, and the Åland archipelago, with port calls to see marvelously untouched medieval quarters in Lithuania, Latvia, and Estonia. All along the way, we will experience privately arranged concerts, meals, and events to celebrate this corner of the world’s unique heritage.
Your AIA host, archaeologist Elizabeth Pierce, has received superb evaluations from travelers on previous AIA-sponsored cruises, including one in the Baltic. She is part of a team of onboard experts who will offer a series of illustrated lectures and informal discussions along the way, including Steven Pifer, former U.S. Ambassador to Ukraine.
We are sharing this voyage with other organizations and capacity is limited, so I encourage you to contact AIA Tours today at aia@studytours.org or (800) 748-6262
to reserve your preferred cabin!

For complete pricing and cabin information, download the brochure.

Visby Curtain Wall on the Island of Gotland, Sweden

Program details are subject to change.

Thursday, August 11
Stockholm
This morning offers a choice of excursions in Stockholm before embarkation:
OPTION 1: Enjoy a guided visit to the award-winning Vasa Museum, which features a 17th-century warship that sank in Stockholm harbor on its maiden voyage and was salvaged and restored more than 300 years later. Continue to Skansen, the first open-air living history museum and zoo in Sweden, located on the island of Djurgården. Also visit Stockholm’s oldest quarter, Gamla Stan (Old Town), for a brief guided walk along the narrow, cobbled streets and alleys.
OPTION 2: Travel just outside the city to the 17th-century Drottningholm Palace, the residence of the royal family and Sweden’s first UNESCO World Heritage site. See the main palace building, the impeccably preserved theater with its original stage machinery, sprawling formal gardens, and impressive Chinese Pavilion. ALL: Embark Hebridean Sky this afternoon. HEBRIDEAN SKY (B,L,D)

Friday, August 12
Visby / At Sea Arrive this morning at the Swedish island of Gotland for a choice of excursions: OPTION 1: Journey to the countryside to explore several of Gotland’s unique medieval ruins. OPTION 2: Enjoy a walking tour along the charming cobblestone lanes of Visby, Gotland’s only city and a UNESCO World Heritage site, including the Historical Museum and castle-like medieval city walls. ALL: Gather on board for the Captain’s welcome reception. HEBRIDEAN SKY (B,L,R,D)

Saturday, August 13
Klaipeda, Lithuania
Founded in 1252, Klaipeda is Lithuania’s oldest city. Monuments and ruins tell the rich, varied heritage as part of East Prussia, Germany, the Soviet Union, and now Lithuania. Enjoy the views of the Baltic Sea en route to the coastal town of Palanga. On arrival, explore a 19th- century Neo-Renaissance style mansion, part of the Lithuanian National Museum of Art and home to one of the world’s largest amber collections. Learn about the formation, extraction, and trade routes of “Baltic gold.” Return to Klaipeda and explore the old town this afternoon, including a stop in Theatre Square, before strolling along the atmospheric narrow streets where shoemakers, blacksmiths, and bakers lived and worked. A Lithuanian diplomat will join the group to share thoughts and insights on current affairs this afternoon. HEBRIDEAN SKY (B,L,D)

Sunday, August 14
Riga, Latvia
Explore Riga, capital and largest city of Latvia. Enjoy a tour of the historical center, a UNESCO World Heritage site noted for its Art Nouveau/Jugendstil and 19th-century wooden architecture. Following a private folkloric performance, explore Riga independently or visit the Museum of the Occupation of Riga, which documents the 51- year period in the 20th century when Latvia was occupied, successively, by the U.S.S.R., Nazi Germany, and the U.S.S.R. again. HEBRIDEAN SKY (B,L,D)

Monday, August 15
Saaremaa, Estonia
Call at Estonia’s largest island, Saaremaa, this afternoon. Despite its close proximity to the mainland, the island has maintained a simple, low-key charm and connection to more traditional livelihoods. Visit the lovely capital of Kuressaare and its magnificently preserved medieval castle and moat, then stroll through the streets of the enchanting old town. Continue inland through the countryside of stone walls, thatched roofs, and historic villages to view a traditional windmill park. HEBRIDEAN SKY (B,L,D)

Tuesday, August 16
Tallinn, Estonia
Tallinn, the capital of Estonia, was the site of mass demonstrations and protests known as the Singing Revolution, which resulted in Estonia’s declaration of independence from the Soviet Union in 1990. Tour the Old Town, a UNESCO World Heritage site considered one of the most perfectly preserved medieval centers in northern Europe, including the Russian Orthodox Alexander Nevsky Cathedral and the 13th-century Toompea Castle, now the home of the Estonian Parliament. Gather for local pastries and a private concert of medieval music, followed by a dialogue with a local journalist and politician about Estonian politics. You may choose to dine independently in town this evening. HEBRIDEAN SKY (B,L,D)

Wednesday, August 17
Helsinki, Finland
Dock near the city center and spend the morning exploring Finland’s vibrant and culturally rich capital city. See the Rock Church, carved directly into a stone slab in the center of town, including a private concert of pieces by Sibelius. Return to the Hebridean Sky for lunch on board or optionally stay in town for an independent lunch. This afternoon enjoy free time in Market Square, a bustling indoor/outdoor market in operation for hundreds of years, with stalls overflowing with everything from fresh produce, meats, and cheeses to local crafts and quirky Finnish souvenirs. HEBRIDEAN SKY (B,L,D)

Thursday, August 18
Mariehamn /At Sea
Call this morning at Mariehamn, the capital of Åland, a 6,700-island archipelago situated about halfway between Finland and Sweden, for a choice of three excursion options: OPTION 1: Tour Mariehamn village, packed with charming shops selling local arts and crafts, restaurants with summer terraces, tree- lined avenues, and unique “gingerbread” wooden buildings, all concentrated around the pedestrian-friendly city center. OPTION 2: Venture into the Åland countryside with a stop at a distillery for local spirits tasting. OPTION 3: Ride alongside rolling green fields and across scenic bridges during a guided bicycle tour. ALL: Return to the ship in the afternoon for the Captain’s farewell evening on board en route to Stockholm. HEBRIDEAN SKY (B,L,D)

Friday, August 19
Stockholm, Sweden /Return to U.S.
After breakfast, disembark the Hebridean Sky and transfer to the airport for flights home. (B