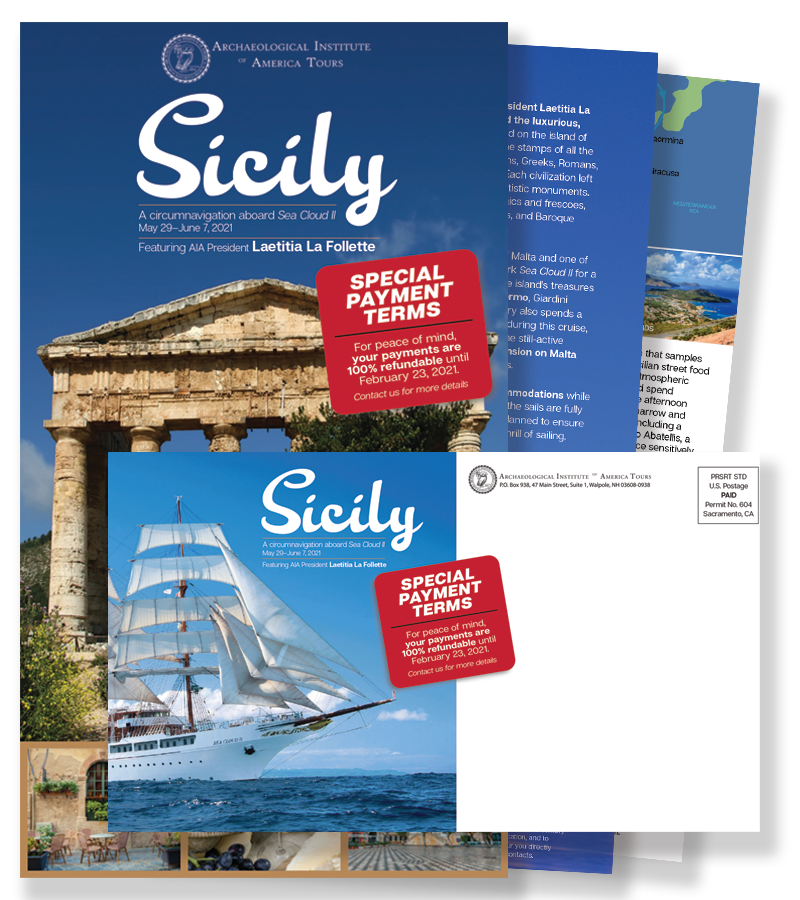 Join Archaeological Institute of America President Laetitia La Follette on a spring cruise circumnavigating Sicily aboard the luxurious, 47-cabin, three-masted barque Sea Cloud II. Begin and end on the island of Malta which, together with Sicily, has witnessed and bears the stamps of all the
major civilizations that the Mediterranean cradled: Phoenicians, Greeks, Romans, Arabs, Normans, Christians, Jews, Byzantines, and Muslims. Each civilization left important stylistic traces in major architectural, urban, and artistic monuments.

Begin in Valletta, the vibrant capital city of the island nation of Malta and one of the most concentrated historic areas in the world. Then embark Sea Cloud II for a splendid seven-night cruise circumnavigating Sicily. Explore the island’s treasures with stops in Trapani (for Segesta, and Erice or Marsala), Palermo, Giardini Naxos (for Taormina and Mt. Etna), and Syracuse. This itinerary also spends a day in the Aeolian Islands, one of seven UNESCO sites visited during this cruise, as well as a specially-timed sailing to enjoy up-close views of the still-active Stromboli volcano. Also available is an optional, post-trip extension on Malta and Gozo, with visits to remarkable Neolithic and medieval sites.

Your host vessel, the Sea Cloud II, offers excellent cruise accommodations while capturing the timeless elegance of sailing. To be on deck when the sails are fully extended is an unforgettable experience. Thus, this itinerary is planned to ensure ample sailing time to enjoy the majesty of this vessel and the thrill of sailing.

A robust educational program rounds out this outstanding journey. AIA lecturer and host Laetitia La Follette, Professor of Greek and Roman Art and Architecture, and Gary Radke, an expert on Italian medieval and Renaissance art and architecture, will offer a series of illustrated lectures and informal discussions along the way. With only 47 cabins available, and with this cruise being cosponsored by other organizations, I encourage you to reserve your preferred cabin today by contacting AIA Tours at aia@studytours.org or (800) 748-6262.

Prices start at $6,995 double occupancy, $9,995 single occupancy. Download complete brochure for details. Contact us for more information or with any questions; 800-748-6262 or email aia@studytours.org

Valletta, Malta - Sicily: a Circumnavigation of Sicily aboard the Sea Cloud II

Sicily: a Circumnavigation of Sicily aboard the Sea Cloud II

Taormina, AIA Tours - Travel with the Archaeological Institute of America

This two-night post-trip extension offers the chance to experience the sites, stunning landscape and local charm of this island nation beyond its capital city, including a day trip to the idyllic island of Gozo to see some of the oldest megalithic temples on Earth. Further details will be sent to confirmed participants.

Depart the U.S. on an overnight flight to Valletta, arriving on Sunday, May 30. Transfer to the hotel and gather for a welcome reception this evening. GRAND HOTEL EXCELSIOR (R)

Monday, May 31 VALLETTA / EMBARK
The entire city of Valletta is a UNESCO World Heritage site, built by the Knights of St. John to defend against Ottoman invasions in the 16th century. Following an introductory lecture, tour the icons of the city and sample Maltese cuisine over lunch in a historic palazzo. Join an optional excursion to the Neolithic temples of Tarxien before boarding Sea Cloud II in the late afternoon. SEA CLOUD II (B,L,D)

Tuesday, June 1 FULL DAY OF SAILING
Sit back and observe skilled deckhands as they scale the masts that reach 180 feet high to set the sails on what is the finest hand-sailed square-rigger of our age. Enjoy the continuation of the lecture series and free time to take advantage of the ship’s many amenities. SEA CLOUD II (B,L,D)

Wednesday, June 2 TRAPANI, SICILY
Begin your exploration of Sicily with a visit to the two main monuments of Segesta: The well-preserved Doric Greek temple, thought to have been designed by an Athenian architect, and the semicircular theater, located on top of a nearby hill boasting wonderful views that made stage scenery unnecessary. Then choose between: 1) An ascent to the medieval hilltop town of Erice, where an impressive Norman castle sits atop the ruins of a temple of Venus and tiny treasure-filled churches dot the cobbled alleyways, or 2)A jaunt to seaside Marsala, an ancient city famous for its wine, to visit the oldest winery in the region and delve into its history on a private tour. SEA CLOUD II (B,L,D)

Thursday, June 3 MONREALE & PALERMO
Begin today with a visit to Monreale, home to a stunning 12th-century cathedral that is a UNESCO World Heritage site recognized as one of the world’s greatest surviving examples of Norman architecture. Continue to Sicily’s capital city of Palermo to marvel at its diverse architectural treasures, including the Royal Palace with its dazzling Cappella Palatina (Royal Chapel), also designated a UNESCO World Heritage site. Enjoy a lunch that samples traditional Sicilian street food in the city’s atmospheric Old Town, and spend the rest of the afternoon exploring its narrow and lively streets including a visit to Palazzo Abatellis, a medieval palace sensitively renovated as an art museum, or explore Palermo’s famed Archaeological Museum, which features artifacts from the island’s major sites. SEA CLOUD II (B,L,D)

Friday, June 4 LIPARI, AEOLIAN ISLANDS
Sail to the small volcanic islet of Lipari, part of the Aeolian Islands, another UNESCO World Heritage site, whose cultural history stretches back 7,000 years. While ashore choose between an e-bike excursion through Lipari’s stunningly beautiful landscape; a leisurely drive around the perimeter of the island with spectacular views of the other Aeolian volcanoes; or an in-depth walking tour of the town center with a visit to the Aeolian Archaeological Museum, displaying an impressive collection of ancient local artifacts. This evening, gather on deck for a cocktail reception as the ship cruises past the active volcano on the neighboring island of Stromboli. SEA CLOUD II (B,L,D)

Saturday, June 5 TAORMINA
Spend the morning exploring the cliffhanging, old-world resort town of Taormina. See the charming market, buzzing shops and cafés on the fashionable pedestrian only Corso Umberto, and the ancient Greek theater, hosting performances for more than two thousand years. Weather permitting, choose to forgo Taormina for a trip up Mt. Etna, ascending the slopes via cable car for stunning views from the top of Europe’s largest active volcano. Return to the ship and set sail for Siracusa, arriving in time to join Sicilians for La Passeggiata,the Italian tradition of taking a walk in the evening. SEA CLOUD II (B,L,D)

Sunday, June 6 SIRACUSA
Founded around 734 B.C. by Greek Corinthians, Siracusa was conquered and ruled by Romans, Saracens, Byzantines, Normans, and Ottomans, who each left a legacy of archaeological treasures that have earned the city UNESCO World Heritage status. Tour the expansive archaeological park, home to the stunning Greek theater and Roman amphitheater that combine to make this one of the greatest archaeological sites in all of Italy. Continue to the adjacent fortified island of Ortigia to take in the sights and smells of the bustling food market before strolling through the beautiful alleyways and piazzas to the Piazza del Duomo, home to the city’s monumental cathedral. Take a private tour of the Santa Lucia alla Badia church, home to Caravaggio’s arresting masterpiece Seppellimento di Santa Lucia (Burial of St Lucy, 1609). In a nearby palazzo dating back to the Middle Ages, enjoy a wine tasting in the owner’s cellar and a private viewing of the family’s collection of etchings of Siracusa and Sicily. Gather aboard Sea Cloud II for a farewell dinner en route to Malta. SEA CLOUD II (B,L,D)

June 7–9 – Optional Post-Tour Extension in Malta
This two-night post-trip extension offers the chance to experience the sites, stunning landscape and local charm of this island nation beyond its capital city, including a day trip to the idyllic island of Gozo to see some of the oldest megalithic temples on Earth. Further details will be sent to confirmed participants.