Cruising the Adriatic: The Best of Slovenia & Croatia 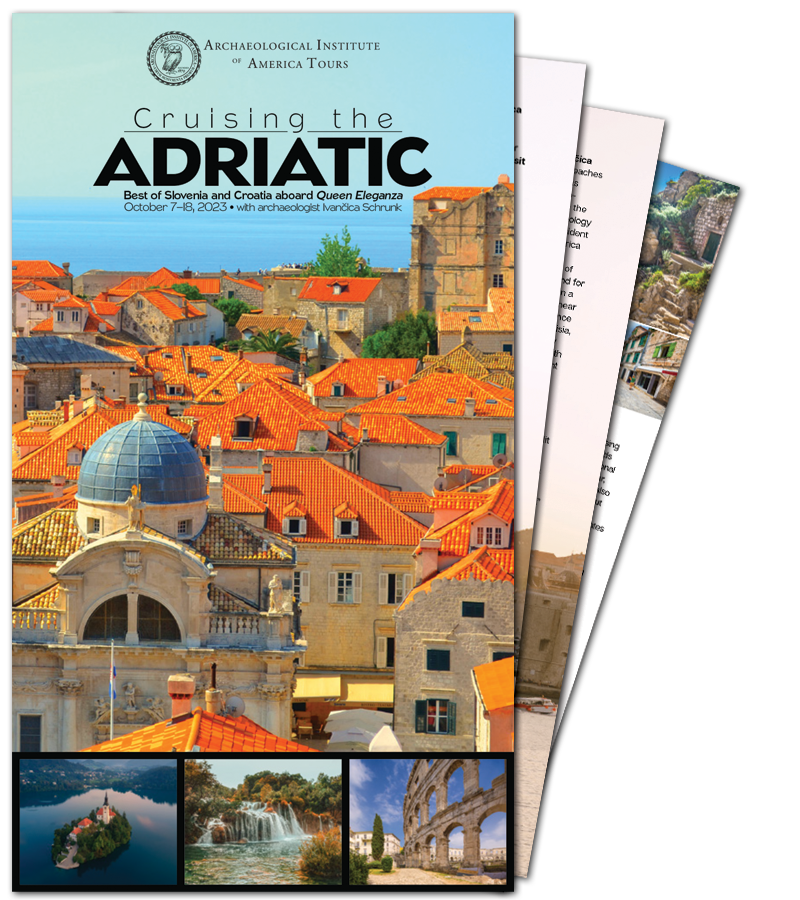 Join Archaeological Institute of America lecturer and host Ivančica (Vanča) Schrunk aboard a modern, 18-cabin yacht for a fall cruise along the spectacular coast of Croatia. Romans, Byzantines, Venetians, Ottomans, and Austrians have vied for control of this strategic coastline that is dotted with over 1,000 islands. In a region well worth exploring for its natural beauty alone, you will visit spellbinding archaeological sites, impressive cathedrals, dramatic palaces, and ancient city centers.

Begin the program in Slovenia’s capital city, Ljubljana, a city with roots back to Roman times. Discover magical Lake Bled, monumental karst caves, and mountain aeries before continuing to Pula, Croatia, to begin your seven-night Adriatic cruise from the Istrian Peninsula to Dubrovnik, calling at Pula, Mali Lošinj, Zadar, Split, Hvar, and Korcula along the way. A leisurely pace allows for free time in town to sample local cuisine and mingle with locals.

Born in Zagreb, Croatia, AIA lecturer and host Vanča Schrunk will enrich your travel experience and understanding of the ancient and medieval history of this region through an onboard series of stimulating lectures as well as informal discussions. In addition, excellent local guides will accompany you on excursions throughout the program. Launched in 2018, the intimate Queen Eleganza yacht features a casual ambiance and the ability to call at small islands and ports inaccessible to larger cruise ships. We are co-sponsoring this program with another organization and, with only 18 cabins total aboard ship, I urge you to reserve your cabin today. Call AIA Tours at (800) 748-6262 or email aia@studytours.org.

Cruising the Adriatic: The Best of Slovenia & Croatia, travel with AIA Tours

Saturday–Sunday, October 7–8, 2023: Home / Ljubljana, Slovenia
Depart home on an overnight flight to Ljubljana. Upon arrival on October 8, transfer to the Grand Hotel Union located within the historic center of the city and gather for a festive welcome dinner featuring Slovenian specialties. GRAND HOTEL UNION (R,D)

Monday, October 9: Ljubljana
After a morning lecture, set out on a walking tour of the historic center, which is off limits to automobiles, and visit the sprawling Central Market. See the famous Dragon Bridge and explore the ancient Roman wall. After lunch, venture to the lovely and impossibly blue Lake Bled and ride gondola-like Pletna boats to visit Slovenia’s only island, a picturesque outpost in the center of the lake. Dinner is at your leisure in Ljubljana this evening. GRAND HOTEL UNION (B,L)

Tuesday, October 10: Portorož
Travel by coach to the UNESCO designated ancient Škocjan Karst Caves, a vast network of tunnels and chambers sometimes referred to as the “underground Grand Canyon.” Settle in at the luxurious Kempinski Palace Hotel near the oceanfront promenade of Portorož, “the French Riviera” of Slovenia, followed by a sunset dinner at the historic Venetian stronghold Piran. KEMPINSKI PALACE HOTEL (B,D)

Wednesday, October 11: Pula, Croatia
Cross the border into Croatia and drive to Pula by way of the scenic mountaintop village of Motovun on the Istrian Peninsula. Explore the well-preserved Roman ruins including the impressive colosseum, the only Roman amphitheater in the world with a complete circle wall. Embark Queen Eleganza this evening in time for a welcome reception and dinner. QUEEN ELEGANZA (B,L,R,D)

Thursday, October 12: Mali Lošinj
Relax on the sun deck while cruising the scenic coastline to Mali Lošinj, a lovely town with a rich maritime legacy thanks to its unique, long, natural harbor. Explore the bustling seafront, lined with imposing 19th-century houses and villas, and enjoy free time in town for dinner and individual pursuits. QUEEN ELEGANZA (B,L)

Friday, October 13: Zadar
Spend the morning cruising through the coastal islands and enjoying the educational program en route to Zadar, with stops for swimming also possible. The impressive but less-crowded city of Zadar boasts a rich history that dates as far back as the Neolithic Era. The streets of the old town are paved with shining white marble, and the inviting waterfront is a magnet for art lovers. Spend the evening at leisure exploring Roman ruins, Venetian architecture, and street-side cafés. QUEEN ELEGANZA (B,L)

Saturday, October 14: Krka National Park / Split
Board a coach and drive to Krka National Park, one of Croatia’s most-loved National Parks, known for its series of cascading waterfalls, picturesque pools, and acres of lush vegetation. Take guided walks on wooden walkways and bridges through this magical landscape. Then tour the UNESCO World Heritage listed Cathedral of St. James in nearby Šibenik, and enjoy lunch on your own in town. Continue to Split, Croatia’s fashionable second-largest city. QUEEN ELEGANZA (B,D)

Sunday, October 15: Split / Hvar
Visit Roman Emperor Diocletian’s Palace, an ancient fortress-like complex spread along the Split waterfront, and enjoy free time in the city before cruising to lavender-scented Hvar Island. Stroll along the elegant main square of Hvar, with views of St. Stephen’s Cathedral, distinguished by its tall, rectangular bell tower, and the 15th-century Franciscan Monastery, whose refectory contains a 1524 edition of Ptolemy’s Atlas. QUEEN ELEGANZA (B)

Monday, October 16: Korcula
Cruise to the fortified town of Korcula, perched on a promontory on its namesake island. Take a walking tour of the narrow, stepped streets and enjoy a wine tasting with accompanying local specialties. Korcula is rich in vineyards and olive groves, picturesque villages, a glorious old town, and age-old religious ceremonies, folk music, and dance traditions. Sample some of Croatia’s famous wines, including the white wine made from pošip grapes that grow primarily on Korcula. QUEEN ELEGANZA (B,L)

Tuesday, October 17: Dubrovnik
Noted for its expansive walls and red tile rooftops, Dubrovnik is perhaps the most-visited destination on the Adriatic coast. This morning explore the sites along the city’s main street, the marble-clad Stradun, including Onofrio’s Fountain, St. Blaise’s Church, the Rector’s Palace, and the Franciscan Church and Monastery, a large complex belonging to the Order of the Friars Minor and consisting of a monastery, church, library, and pharmacy, the latter of which dates from A.D. 1317. Enjoy free time in the afternoon to explore the maze of alleyways and Renaissanceera architecture before a farewell dinner on board. QUEEN ELEGANZA (B,L,D)

Wednesday, October 18: Dubrovnik / Home
Disembark this morning and transfer to the Dubrovnik airport for flights home.(B)