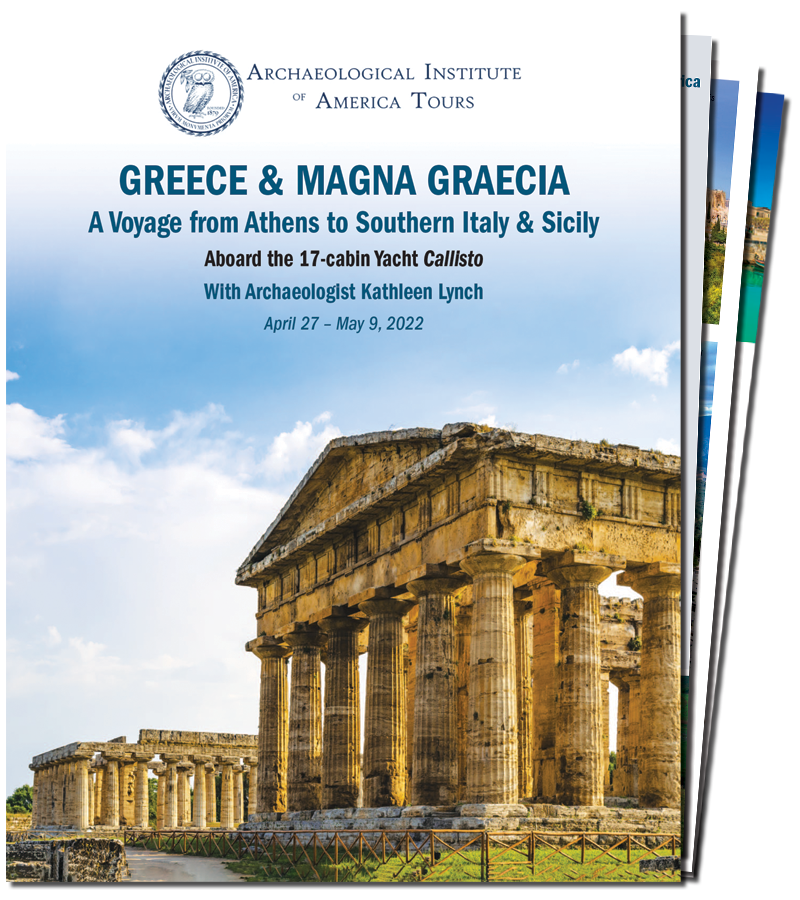 A Voyage from Athens to Southern Italy & Sicily

Next spring explore splendid ancient sites in Greece, southern Italy, and Sicily with our acclaimed and engaging AIA lecturer and host Kathleen Lynch. Travel with Kathleen aboard the Callisto, which is akin to a private yacht rather than a cruise ship and accommodates only 34 guests. This purpose-crafted sea journey explores ancient cities and sites in Greece and Italy that share a common history going back almost 3,000 years. Southern Italy and Sicily were known in antiquity as Magna Graecia (“Greater Greece”) because of the large number of cities founded by Greeks starting in the 8th century B.C. In all, 22 major settlements were established, some of them evolving into prominent centers of culture, learning, and commerce. The monuments that have survived in these places through the centuries speak eloquently of the power and wealth they attained.

After exploring Athens’ fabled monuments, we embark our 17-cabin yacht and follow the route of the ancient Greeks on their westward expansion. Stops include the quaint port town of Gytheion in the southern Peloponnese, our gateway to Sparta, famed in antiquity for its military power, and Mistra, perhaps Greece’s most important and evocative Byzantine site; Olympia, where athletes from the entire Greek world gathered for the Panhellenic games, which were held for 1,000 years from 776 B.C. to A.D. 393; Crotone, where Pythagoras established his school of philosophy; Syracuse, one of the most powerful cities of the ancient world; Reggio di Calabria where, in the National Museum, we will stand in awe before the celebrated Riace Bronzes, masterpieces of ancient Greek sculpture; magnificent Paestum, originally called Poseidonia, home to several of the best-preserved Greek temples; Segesta, where on a hilltop above a ravine stands the perfectly-preserved, 5th-century B.C. Doric temple; and Erice, once a center for the cult of Venus, now one of Italy’s most spectacular hill towns.

Spring is the preferred time of the year to visit the ancient sites in these legendary lands, when they as well as the countryside are surrounded by a cornucopia of colorful wildflowers. I hope you will join Professor Lynch on this journey that reveals the continuity of culture from the ancient past to more recent times. Since Callisto has only 17 cabins and this program is co-sponsored, I encourage you to contact our office today at aia@studytours.org or (800) 748-6262 to reserve your preferred cabin.

In an era of mega cruise ships that carry thousands of passengers, Callisto is a delightful alternative. More like a private yacht than a cruise ship, Callisto accommodates a maximum of just 34 guests in 17 cabins that face outside. Unlike the formalities found on larger cruise ships, a relaxed and informal atmosphere prevails aboard. A well-trained English-speaking crew of 18 manages the ship and provides friendly and efficient service. The dining room, surrounded by large windows, accommodates all guests at one unassigned seating, while the adjoining lounge, which is also lined with windows, is a good place to meet and socialize with fellow travelers, and attend lectures. When the weather permits, several meals will be served al fresco. A library faces the spacious Sun Deck.

Tour prices start at $8,990 double occupancy, limited cabins available for single occupancy at a supplement of 150% of the per person double occupancy rate. For more information on pricing and other details, download the complete brochure.

Coastline of Ortygia, the historic center of Syracuse © Fausto Schiliro

Wednesday, April 27, 2022: Depart the US
Depart the United States for Athens, Greece.

Friday, April 29: Athens
One of the world’s most venerable cities, Athens is the capital of Greece and Europe’s oldest city. Its ancient monuments are testimonials to a glorious past that gave birth to democracy and witnessed the origins of many ideas, arts and sciences that constitute the Western tradition. Explore in the morning the Agora, the civic and commercial center of ancient Athens and the living heart of its democracy. See the remains of civic buildings, the well-preserved 5th-century BC Temple of Hephaistos, and the Agora Museum, housed in the magnificently reconstructed Stoa of Attalus. In the afternoon, visit the National Archaeological Museum, home to outstanding collections that represent Greece’s long history and cultures. Meals: B

Saturday, April 30: Athens/Embarkation
Spend the morning at leisure. In the afternoon, tour the Acroplis. Occupied since prehistoric times, the rocky plateau of the Acropolis rises dramatically out of the plain and dominates the modern city as it did in ancient times. The incomparable Parthenon and the other temples built in the 5th century BC represent the highest achievement of architecture and art of the Classical period. Also, visit the Acropolis Museum, which houses a magnificent collection of sculpture. Continue to the port to embark the Callisto and sail. Meals: B, D

Sunday, May 1: Gytheion/Sparta & Mistra
From the charming port town of Gytheion, on the south shore of the Peloponnese, drive to Sparta, famed in antiquity for its military power. Visit the scant remains of the Spartan acropolis and the Temple of Athena, followed by a visit to the Archaeological Museum which, among other fine exhibits, includes a marble bust thought to depict Leonidas, the leader of a small Spartan army that defended Thermopylae in 480 BC in the attempt to halt the Persian invasion. After lunch at a local restaurant, explore the nearby Byzantine town of Mistra, which is located on the slopes of Mount Taygetos and overlooks the plain of Sparta. Within the walls of this remarkably well preserved medieval town are some of the finest examples of 14th and 15th century architecture and art in Greece. Meals: B, L, D

Monday, May 2: Olympia
From the port of Katakolon, where we will arrive in the morning, drive to nearby Olympia, located in a beautiful setting in a river valley covered with evergreen poplars, oaks, planes and pines. Coupled with its importance throughout antiquity, and its rich remains, Olympia is one of the most significant archaeological sites in Greece. A sacred precinct dedicated to Zeus, it was here that the Panhellenic games were held every four years from 776 BC to AD 393, giving rise to the modern Olympics. Tour the site and see the temples, other public buildings and the stadium where the games were held. Also, visit the Archaeological Museum, which exhibits some of the best sculpture from the Classical to the Roman periods. Meals: B, L, D

Tuesday, May 3: Corfu
Identified as the Homeric island of Scheria, where Odysseus was washed ashore, Corfu’s recorded history begins in 734 BC, when Corinth, recognizing the islands’ strategic position that leads from the Ionian Sea to the Adriatic, founded a colony and called it Korkyra. From the 14th to the 18th centuries, the island was controlled by Venice, which left its strong mark on the town’s architecture. Explore Palaeopolis, the site of the ancient settlement. Located within the beautiful wooded Mon Repos estate, it includes the remains of sanctuaries, temples and an early Christian basilica. A neoclassical villa houses the Palaeopolis Museum. In the town of Corfu, we visit the Archaeological Museum, whose notable exhibits include the massive Gorgon pediment from the Temple of Artemis in Palaeopolis. Other interesting sites include the 14th-century Venetian Old Fortress, and the medieval church of Antivouniotissa, home to a superb collection of Byzantine and post-Byzantine icons. Meals: B, L, D

Wednesday, May 4: Crotone, Calabria, Italy
Crossing the Ionian Sea, we make our first call in ancient Magna Graecia in Crotone, which was founded by Achaeans in 710 BC, and called Croton, becoming one of the most prominent and wealthiest Greek cities in southern Italy. In the mid-6th century BC, Pythagoras made it the center of his famed school of philosophy. Visit the National Archaeological Museum, whose exhibits chronicle the development of the city from prehistoric times to the Middle Ages. Artifacts include the Treasure of Hera, objects in bronze, silver and gold, exquisite jewelry, and finds from the latest excavations. Then drive to the charming hilltop medieval village of Santa Severina, a center of learning and culture under the Byzantines and then the Normans. Visit the Byzantine baptistery, dating from the 8th-9th centuries, the old cathedral (10th century), and the imposing castle. Meals: B, L, D

Thursday, May 5: Syracuse, Sicily
Founded by Corinth in 734 BC, Syracuse became one of the most prominent and wealthiest cities of the ancient Mediterranean world, rivalling Athens in power and prestige. Our exploration of the city will begin in Ortygia, the center of the ancient city, a small island that is connected to the mainland of Sicily by two bridges. Notable here are the Cathedral, which incorporated in its construction the 5th-century Temple of Athena, the Arethusa Fountain, and the remains of the Temple of Apollo, dating from the early 6th century BC. On mainland Syracuse we focus on the Neapolis Archaeological Park, which includes the 5th-century BC Greek Theater, hewn out of the rocky hillside; the Latomia del Paradiso, the enormous ancient quarries; the Roman Amphitheater; the 3rd-century BC Altar of Hieron II; and the Archaeological Museum, which houses Sicily’s most extensive and interesting archaeological collection. Meals: B, L, D

Friday, May 6: Reggio di Calabria & Taormina
Arrive in the morning in the flourishing port city of Reggio di Calabria, the capital of Calabria, situated at the foot of the mountainous Aspromonte region, and on the narrow waterway that separates mainland Italy from Sicily. Visit the National Museum of Magna Graecia, home to an extraordinary collection of artifacts. Highlights include the pinakes, clay tablets that were brightly painted between 490 – 450 BC, excavated at the Sanctuary of Persephone; and the celebrated Riace Bronzes, the heroic statues which are among the very best example of bronze statuary to have survived from the Greek Classical period. Sail across the Straits of Messina to Messina itself for an excursion to Taormina which, from its hilltop position above the sea, overlooks the cone of Mount Etna. Founded in 403 BC by settlers from the Aegean island of Naxos and called Tauromenion, this delightful town is dominated by the magnificent Greek theater. Taormina’s narrow streets and alleyways are lined with elegant mansions. Meals: B, L, D

Saturday, May 7: Paestum
Reaching Campania on the Italian mainland, we disembark at the small port of Agropoli and drive to nearby Paestum, one of the most important cities of Magna Graecia, founded by Greeks in 600 BC as Poseidonia, the city of Poseidon. Situated along trade routes and surrounded by fertile land, the city grew quickly into a thriving agricultural and maritime center. Its wealth is attested by the three magnificent Doric temples that were constructed between 530 – 450 BC, and which dominate the site to this day. In addition to the three very well-preserved temples, the excavated site includes the remains of residential buildings and a forum. The museum, located next to the site, includes artifacts from the excavations, the most unique of which is the series of mural paintings from the so-called Tomb of the Diver (480 BC), which constitute rare examples of ancient Greek painting. Meals: B, L, D

Sunday, May 8: Segesta & Erice, Sicily
Return to Sicily and dock at the port city of Trapani, the ancient Drepanon, which was built below the headland of Mount Erice. Drive to Segesta to visit the superb late 5th-century BC temple, standing beautifully in isolation amid the hills. Despite the excellent preservation of its 36 columns, entablature and pediments, some archaeologists believe that the temple was unfinished and remains so since its construction. Continue to Erice, a quaint medieval town of stone houses and narrow alleyways, built on top of a hill. This was the ancient Eryx, famous in antiquity for its sanctuary of Venus. Spend time exploring this splendid spot. Meals: B, L, D

Monday, May 9: Palermo/Disembarkation/USA
Arrive in Palermo, Sicily’s capital. Disembark and transfer to the airport for your return flight home. Meals: B