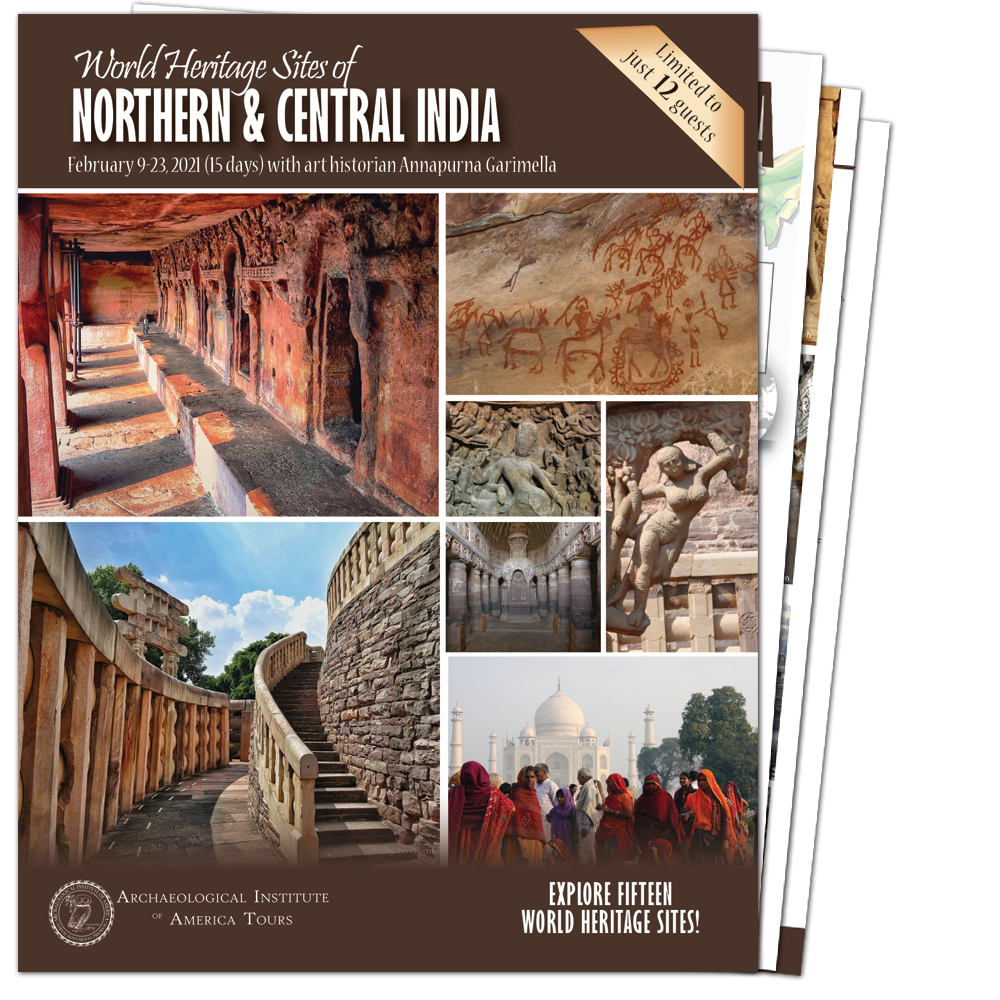 This tour has been cancelled and is in the planning stages for 2022. To be notified when the tour becomes available contact us at 800-748-6262 or aia@studytours.org.

Save yourself an air ticket and $750 per person by combining this tour with a subsequent “Journey Down the Ganges River.”

Wednesday, February 10: Arrive Mumbai | Private transfer to hotel
Arrive at Mumbai’s Chhatrapati Shivaji Maharaj International Airport (BOM), where you will be met and transferred to our hotel. Check-in is available after 2pm. If your flight arrives early in the morning of February 10th, you might consider also reserving a room for the night of February 9th so that you can check-in upon arrival. Overnight at the 5-star Taj Mahal Palace Mumbai for two nights.

Thursday, February 11: Elephanta Caves | Prince of Wales Museum | Welcome dinner
Our morning excursion takes us through the famous Gateway of India for a short boat ride across Mumbai Harbor to the UNESCO World Heritage site of Elephanta. Here we admire a fine cluster of six rock-cut caves with masterpieces capturing movement in stone that date from between the 6th and 8th centuries. Carved out of the living rock, the sculptures in the most majestic cave depict aspects of God Shiva portrayed as the cosmic dancer, the androgyne, and the amorous groom. On the south wall is a huge triple-headed statue representing Shiva’s three manifestations as the serene Preserver, gentle Creator, and fierce Destroyer. Return to Mumbai and, after lunch at a local restaurant, drive past Chhatrapati Shivaji Terminus (formerly Victoria Terminus, and still a UNESCO World Heritage site) and other colonial buildings. Arrive at the Prince of Wales Museum, designed in the Indo-Saracenic style and featuring sections for natural history, archaeology, art, and paintings, including a fine collection of miniature paintings, images, and bas-reliefs from the Elephanta Caves. Return to our hotel and gather tonight for a welcome cocktail reception and dinner at our hotel. (B,L,R,D)

Friday, February 12: Fly to Aurangabad | Ellora Caves | Aurangabad
Transfer early this morning to the airport for our flight to Aurangabad. Upon arrival we transfer to our hotel for breakfast. Set out for the Ellora caves, a UNESCO World Heritage site and one of the largest rock-cut cave complexes in the world, comprising temples and monasteries hewn from living rock by Buddhist, Hindu, and Jain monks and craftsmen. Dating from A.D. 600 to 1000, there are over 100 caves at the site, all excavated from the basalt cliffs, 34 of which are open to the public. These consist of 12 Buddhist (caves 1–12), 17 Hindu (caves 13–29), and 5 Jain (caves 30–34) caves. They have been compared to Egypt’s Abu Simbel and pharaonic tombs for their amazing construction and their sculptures and frescoes. The most marvelous of all is the stupendous rock temple of Kailash (cave 16) that is the largest single monolithic rock excavation in the world: a chariot-shaped monument dedicated to Shiva. After lunch we return to Ellora to discover more splendid cave art, and then return to our hotel in Aurangabad for dinner. Overnight at the 5-star Vivanta Aurangabad by Taj for two nights. (B,L,D)

Saturday, February 13: Ajanta Caves | Aurangabad
After breakfast we visit the Ajanta Caves, a UNESCO World Heritage site with approximately 30 rock-cut Buddhist cave monuments carved into a wall of rock, dating from the 2nd century B.C. to the 5th century A.D. These caves are masterpieces of Buddhist religious art that influenced the subsequent development of art throughout Asia because of their exceptionally expressive ancient paintings and rock-cut sculptures that are considered among the finest surviving examples of ancient Indian art. We return to Aurangabad for dinner. (B,L,D)

Sunday, February 14: Fly to Jaipur | Jaipur: City Palace, Observatory (Jantar Mantar)
Take an early morning flight to Udaipur and a connecting flight to Jaipur. Transfer to our hotel and, after lunch, depart for the City Palace and Observatory. The walled city of Jaipur itself is a UNESCO World Heritage site, and its City Palace is an imposing blend of traditional Rajasthan and Mughal architecture. The palace complex is divided into a series of courtyards, gardens, and palatial buildings, including the City Palace Museum with Afghan and Persian carpets, miniature paintings, astronomical manuscripts in Persian and Sanskrit, and a medieval weapons collection. Then explore the UNESCO World Heritage site of Jantar Mantar, an extraordinary and vast astronomical observatory complex built by Jai Singh in the early 18th century. The Jaipur observatory is the largest and best preserved of the five he built, and was restored in 1901. Each construction has a specific purpose, such as measuring the position of stars’ altitudes and azmuths, or calculating eclipses. Gather for dinner this evening. Overnight at the 5-star Jai Mahal Palace for two nights. (B,L,D)

Monday, February 15: Jaipur: Amber Fort, Anokhi Museum | PM at leisure
After breakfast visit Amber Fort, an exquisite old palace overlooking Maota Lake at the entrance to a rocky mountain grove. Built in the 17th century, and part of the UNESCO World Heritage site of the “Hill Forts of Rajasthan,” the palace is a distinguished specimen of Rajput architecture. Its Jai Mandir (Hall of Victory) is so delicately ornamented with fine inlay work that it glows. Then visit the Anokhi Museum, a small textile museum dedicated to the ancient craft of hand block printing that is housed in a restored, UNESCO-award-winning, 400-year-old building. After lunch, you may return to our hotel to relax and enjoy the hotel’s amenities, or join a guided visit to the local bazaars for shopping. (B,L,D)

Tuesday, February 16: Drive to Bharatpur
After breakfast we drive to Bharatpur and check into The Bagh Bharatpur, a heritage hotel spread over 40 acres. After lunch, with a cooking demonstration, the afternoon is free to relax and enjoy the property’s amenities. Attend the colorful Raas Leela, Lord Krishna’s dance with his love, Radha, and her friends; followed by dinner at our hotel. Overnight at the 3-star Bagh Bharatpur. (B,L,D)

Wednesday, February 17: Keoladeo Ghana NP | Fatehpur Sikri | Agra
Visit the UNESCO World Heritage wildlife park of Keoladeo National Park, formerly the private hunting reserve of the Maharajas of Bharatpur. It was developed in the late 19th century by creating small dams and bunds to collect rain water and by feeding it with an irrigation canal. Over the years the lakes have attracted a great number of waterfowl. This famous park is also an excellent place to see mammals such as the golden jackal, striped hyena, fishing cat, jungle cat, nilgai, sambar, blackbuck, and wild boar. Bicycle rickshaws will transport us for wildlife viewing in the park. We then drive to Agra, stopping en route to visit the UNESCO World Heritage site of Fatehpur Sikri. Built in the 16th century by Mughal Emperor Akbar the Great, Fatehpur Sikri literally means ‘The City of Victory,” and its audience halls, palaces, and mosques are still in a state of perfection. Then continue on to Agra and check-in to our hotel. Overnight at the 5-star Trident Agra for two nights. (B,L,D)

Thursday, February 18: Agra: Taj Mahal, Agra Fort, Itimad-Ud-Daulah
Set out early this morning for a sunrise visit to the 17th-century Taj Mahal, a UNESCO World Heritage site and one of the “New Seven Wonders of the World.” Built by Mughal Emperor Shah Jahan in memory of his beloved consort, Mumtaz Mahal, this beautiful mausoleum is pure white marble and an architectural marvel. Return to our hotel for breakfast and then visit another remarkable UNESCO World Heritage site, the 16th-century Agra Fort, built by Emperor Akbar. Its vast maze of courtyards, mosques, and private chambers echo the story of the mighty Mughal Empire. While in Akbar’s time the fort was principally a military structure, by Shah Jahan’s time the fort had become partially a palace. After lunch we visit Itimad-Ud-Daulah, an exquisite Mughal mausoleum, representing a silver jewel box in marble that has many design features that were later used in the Taj Mahal. We enjoy a sunset visit to the Taj Mahal and then return to our hotel for dinner. (B,L,D)

Friday, February 19: Train to Bhopal | PM at leisure
Depart early this morning to Agra Railway Station to board the Shatabdi Express train to Bhopal, arriving in the early afternoon. Transfer to our hotel for an afternoon at leisure to enjoy the hotel’s luxurious amenities. Overnight at the 5-star Jehan Numa Palace for two nights (B,L,D)

Saturday, February 20: Bhimbetka Caves | Sanchi | Udayagiri Caves
After breakfast we visit the Bhimbetka Caves, a UNESCO World Heritage site with more than 600 rock shelters within a rocky terrain of dense forest and craggy cliffs, dating from the Neolithic Age. In vivid panoramic detail, paintings in the caves depict the life of the prehistoric cave-dwellers with abundant images of animals. After lunch we visit the UNESCO World Heritage site of Sanchi, the earliest-known structural temple in South Asia and one of the oldest and most interesting Buddhist structures in the world. The great Emperor Ashoka built the first stupa (an earthen mound that enshrines a relic of the Buddha) here in the 3rd century B.C. Later, a great number of stupas and other religious structures were added. Sculptures at Sanchi depict in a wonderful, lively style the previous animal and human births of the Buddha, as well as his last life in which he attained enlightenment. Sanchi, along with Ajanta, represents an important moment in the history of Buddhism when the Buddha was represented not by anthropomorphic figures but only by a set of symbols. Next we visit the nearby Udayagiri Caves, featuring some of the oldest Hindu images within a series of rock-cut sanctuaries carved into the hillside in the early years of the 5th century A.D. The site is renowned for its ancient monumental relief sculpture of the Hindu god Vishnu, in his incarnation as the boar-headed Varaha. Return to our hotel for dinner. (B,L,D)

Sunday, February 21: Fly to Delhi | Delhi: National Museum, city overview tour | Farewell dinner
This morning we fly to Delhi and visit the National Museum. After lunch we drive past India Gate, the Presidential Palace, Feroze Shah Kotla (fortress), and Raj Ghat (Mahatma Gandhi memorial), and then check-in to our hotel. Gather this evening for our farewell reception and dinner. Annapurna and those travelers who are starting the subsequent Ganges River program tomorrow will bid adieu to this group tonight. Overnight at the 5-star Taj Mahal New Delhi for two nights. (B,L,R,D)

Monday, February 22:  Delhi: Jama Mosque, Humayun’s Tomb, Qutb Complex
After breakfast, without Annapurna but still in the company of an excellent guide, we visit Old Delhi, beginning with the 17th-century Jama Mosque, the second largest mosque on the continent, and the 16th-century Humayun’s Tomb: architectural forerunner of the Taj Mahal, a UNESCO World Heritage site, and an example of Mughal architecture at its graceful best. After lunch we visit the Qutb complex, a UNESCO World Heritage site with a 236-foot-high minaret, 1,500-year-old iron pillar that does not rust, and a mosque that was constructed from reused temple pillars. Return to our hotel and gather for dinner this evening. (B,L,D)

Tuesday, February 23:  Fly home
In the morning you will be transferred to Delhi’s Indira Gandhi International Airport (DEL) for flights homeward. Rooms at our hotel are available until noon. (B)