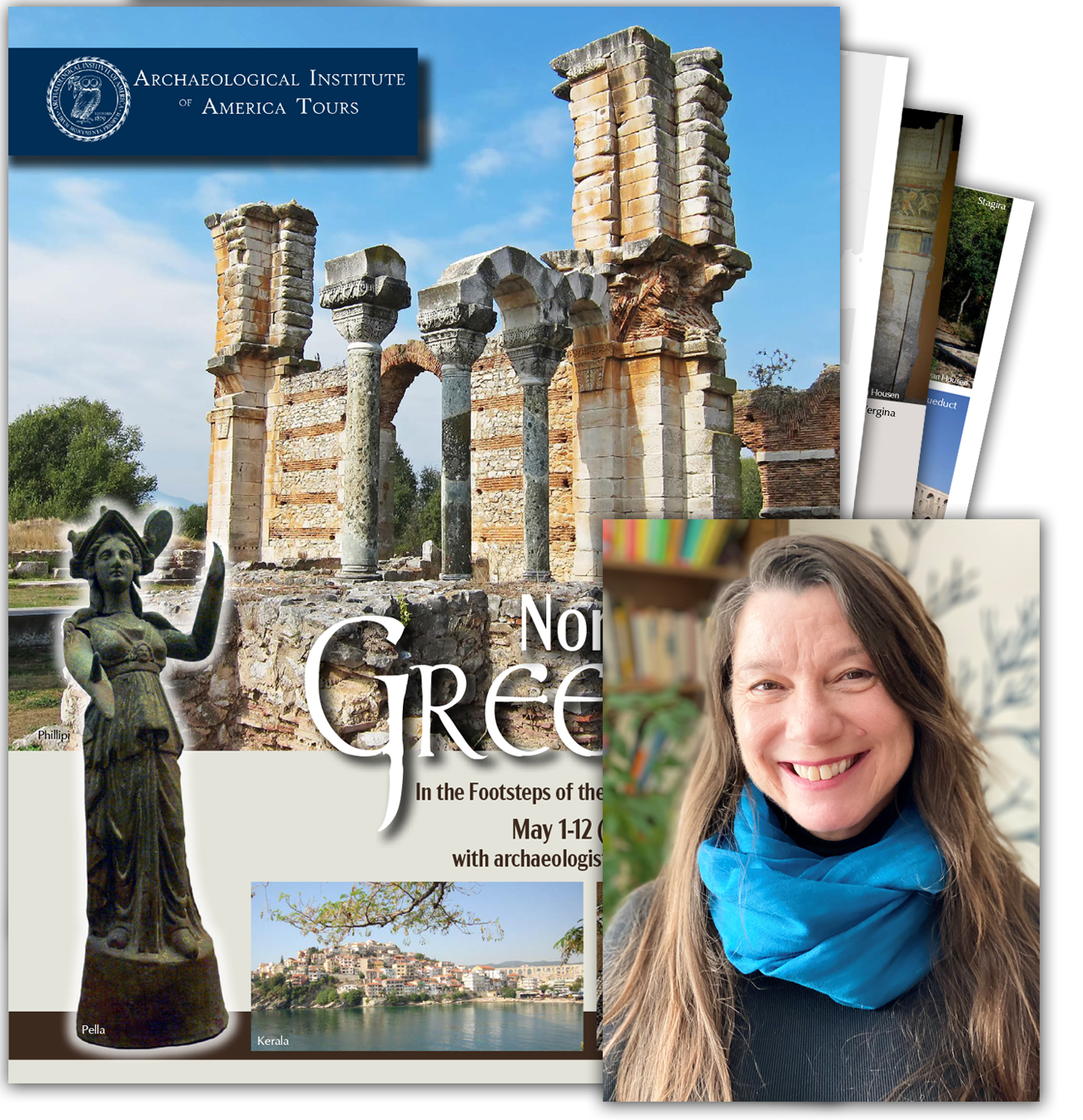 In the Footsteps of the Kings of Macedon

For more information about this tour or to make a reservation, please contact us at aia@studytours.org or call 800-748-6262 or reserve your space online.

Join our engaging and fascinating AIA lecturer, Kathleen Lynch, on this unique itinerary in the footsteps of legendary rulers such as Philip II and his son, Alexander the Great. Discover several UNESCO World Heritage Sites and four cities along the ancient Via Egnatia, which linked Europe with Asia. Explore outstanding museums and admire lovely landscapes between the sea and the mountains. Stay at least two nights each at three luxurious hotels: Thessaloniki’s 5-star Electra Palace, located in the city center just steps away from the seaside promenade; the 5-star Cavo Olympo Luxury Resort & Spa at the foot of Mt. Olympus; and the Imaret, a historic and ultra-luxurious boutique hotel, founded originally by Mohamed Ali Pasha in 1813 as an Islamic school and charitable center.

Single room supplement will be charged when requested or required (limited availability). With fewer than 11 participants, a small group surcharge may be added.

Tuesday, May 2: Arrive Thessaloniki, Greece | Promenade walk | Welcome reception
Upon arrival at Thessaloniki Airport “Makedonia” (SKG), you will be met and transferred privately to our luxurious hotel on Aristotelous Square, next to the Thermaikos Gulf, with a striking view of Mount Olympus in the distance. Later in the afternoon, meet our AIA lecturer, tour manager, local guide, and fellow participants to take a walk along the splendid promenade. This evening we gather for a welcome reception at our hotel. Overnight at the 5-star Electra Palace Thessaloniki for three nights. (R)

Wednesday, May 3: Thessaloniki city tour | Welcome dinner
Founded in 315 B.C., the provincial capital and seaport of Thessalonika was one of the first bases for the spread of Christianity, and today it is Greece’s second largest city. Our guided city tour includes the imposing Byzantine City Walls, the Churches of Agios Dimitrios and Agia Sofia, the Rotunda of St. George, the Roman Arch of Galerius, and the Roman Agora. Gather for our first lecture by Kathleen Lynch, followed by a welcome dinner. (B,L,D)

Thursday, May 4: Mieza | Pella | Thessaloniki
This morning we drive a little over an hour to Mieza, “shrine of the Nymphs,” a town where Aristotle taught a young Alexander the Great. Both the shrine and the school complex consist of two natural caves, and we will see the ancient theater and, if they are open, the Macedonian tombs. Continue on to Pella, capital of ancient Macedonia and birthplace of Philip II and Alexander. Highlights of the site include its exquisite pebble mosaic floors and museum. Return to Thessaloniki for an evening at leisure. (B,L)

Friday, May 5: Vergina | Dion | Litochoro
This morning we drive to Vergina, the site of ancient Aigai, the first capital of Macedon. In 336 B.C., Philip II was assassinated in Aigai’s theater and his son, Alexander the Great, was proclaimed king. In 1977 the burial sites of several kings of Macedon were found, and the site museum displays their glorious frescoes, gold, and other treasures. We drive south to Dion, the Macedonians’ sacred city, where Philip II and Alexander made sacrifices to Zeus at the foot of Mount Olympus. We will explore the site and visit the museum. A short drive takes us to the town of Litochoro, located at the base of Mount Olympus, on the western shore of the Thermaic Gulf. Check-in to our hotel and then gather for dinner. Overnight at the 5-star Cavo Olympo Luxury Resort & Spa for two nights. (B,L,D)

Saturday, May 6: At leisure OR optional hike in Mt. Olympus National Park | Litochoro
Today you may choose to relax and enjoy the amenities of our luxurious resort/spa OR join us for a guided hike in Mount Olympus National Park. Depending on the group’s overall levels of fitness and energy, our guide will determine the best hiking option, but we plan to walk some portion of the Litochoro–Prionia route, through the beautiful, black pine tree forest with waterfalls and the old (16th-century) Monastery of Agios Dionysios. (B,L)

Sunday, May 7: Olynthos | Archaeological Museum of Polygyros | Kavala
We drive two hours to the Chalkidiki Peninsula, where we visit the ruins of Ancient Olynthos which was built on two hills – the city on the southern hill was founded in the seventh century B.C. and destroyed by the Persians in 479 B.C., when its inhabitants built a new city on the northern hill. This prosperous and powerful new city was then destroyed by Philip II’s forces in 348 B.C. The archaeological site gives us insight into ancient town planning, and its residential quarters give us insight into ancient domestic life. Continue on to the newly-renovated Archaeological Museum of Polygyros, which houses collections from sites in the Chalkidiki region dating from the Bronze Age to the Roman period, including artifacts from Olynthos. We continue driving east for two hours, along the shores of the Aegean, to Kavala where we check-in to a historic and refurbished boutique hotel that was originally a Koranic school and charitable center founded by Mohamed Ali (see May 9th description) in 1813. Overnight at the 5-star Imaret Hotel for three nights. (B,L,D)

Monday, May 8: Philippi | Winery visit | Kavala
This morning we visit the archaeological site of Philippi, founded in 356 B.C. by Philip II. It was abandoned after the Ottoman conquest in the 14th century. It lies along the ancient route linking Europe and Asia, the Via Egnatia. Just west of the city was the historic Battle of Philippi in 42 B.C., the final battle between the forces of Mark Antony and Octavian (future Augustus) and the leaders of Julius Caesar’s assassination, Brutus and Cassius. This battle presaged the end of the Roman Republic and the dawn of the Roman Empire. The city became a center of the Christian faith following the Apostle Paul’s visit in A.D. 49-50. The site of Philippi has characteristic monuments of the Hellenistic, Roman, and Early Christian periods, including an ancient theater and basilica. We then enjoy a visit to a winery before returning to our luxury hotel in Kavala. (B,L)

Tuesday, May 9: Kavala: Archaeology Museum, Aqueduct, Castle, Institute Mohamed Ali
Today is devoted to exploring Kavala, beginning with a guided walking tour of the old city, including the Archaeology Museum, Aqueduct, and Castle. After lunch, we walk to the Institute Mohamed Ali, former home of Mohamed Ali Pasha, who was born in 1769 in Kavala, then part of the Ottoman Empire. He was Khedive of Egypt and Sudan, and is regarded as the founder of modern Egypt. (B,L)

Wednesday, May 10: Amphipolis | Thessaloniki
This morning we drive west to Amphipolis, where excavations in and around the city have revealed important buildings, ancient walls, and tombs, and the finds are displayed at the archaeological museum. Excavations of a royal Macedonian tomb (the Kasta Tomb) are in progress, and we are seeking permission to enter (TBD). It is the largest ancient tumulus (burial mound) ever discovered in Greece, and dwarfs the one at Vergina. We continue driving west and check-in again to our hotel in Thessaloniki. Enjoy some time to relax and explore the lively promenade area, packed with shops and restaurants. Dinner is on your own. Overnight at the 5-star Electra Palace Thessaloniki  for two nights. (B,L)

Thursday, May 11: Thessaloniki: Archaeological Museum, Byzantine Museum | Farewell dinner
We will end our trip with visits to two splendid Thessaloniki museums, one focusing on archaeological material and the other on masterpieces of Byzantine art. This evening we enjoy a festive farewell dinner hosted by Kathleen Lynch. (B,L,D)

Friday, May 12: Fly home
Take a private transfer to Thessaloniki Airport “Makedonia” (SKG) in time for independent flights homeward. (B)