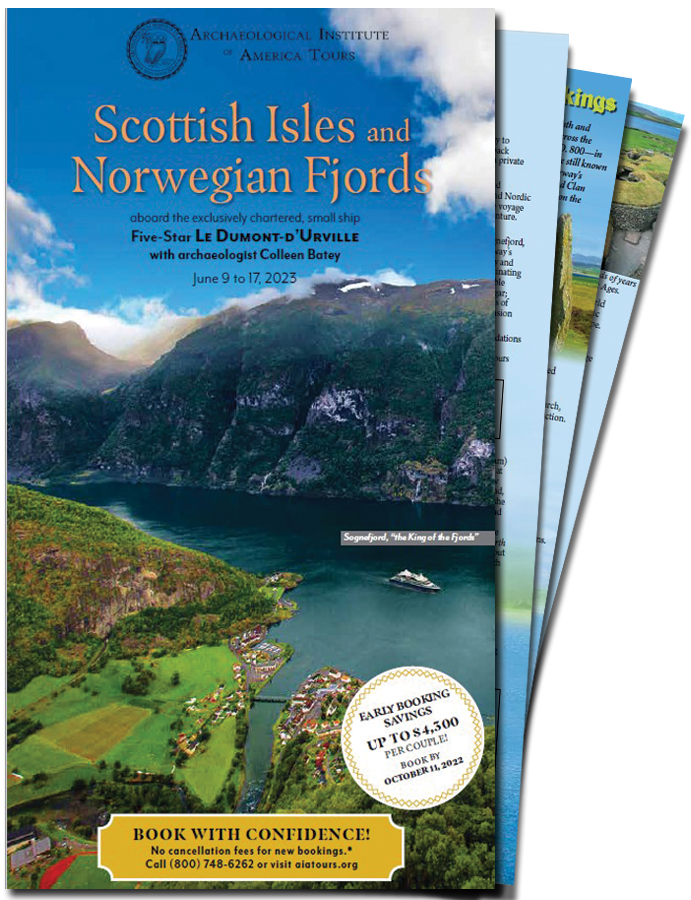 I invite you to join AIA lecturer and host Colleen Batey on this magnificent cruise from Scotland to Norway, visiting remote destinations forever linked by their Viking heritage. Embark (and unpack just once) your five-star ship with only 92 suites and staterooms, each with a private balcony, providing all the luxury and sophistication of a fine hotel.

Dr. Batey will be part of a team of onboard experts who together will offer a series of lectures and informal discussions. This specially-designed itinerary follows the stepping stones of Scottish and Nordic civilizations during the best time of year, when the weather is mild and the days are long—a rare voyage accomplished only aboard a small ship cruising into smaller ports where larger vessels cannot venture.

Journey from dynamic Glasgow to charming Bergen, where rows of colorful, gabled houses on the historical Bryggen waterfront evoke the city’s past as a center of Hanseatic League trade. Traverse the Tolkienesque lands of the Scottish Highlands, and cruise to Scotland’s Orkney and Shetland Islands. Learn more about the islands’ fascinating Neolithic history from guest lecturer and renowned archaeologist Nick Card, noted for his incredible commitment to research in the region. Marvel at the Neolithic standing stones of the Ring of Brodgar; the 5,000-year-old village of Skara Brae; and the settlement of Jarlshof, revealing layers of thousands of years of human history. Navigate the ancient shipping lanes of the Vikings and gain an intimate perspective of Norway’s spectacular mountain landscape aboard the Flåm Railway, one of the world’s most scenic train rides. A pre-cruise extension in Edinburgh and Glasgow, and a post‑cruise extension in Norway and Copenhagen, are also available.

We are sharing this voyage with other organizations, so this exclusive travel program is expected to sell out quickly. I urge you to reserve your space now, while early booking savings are still available.

Book with confidence! No cancellation fees for new bookings.
Early booking savings up to $4,300 per couple, if booked by October 11, 2022

Single supplements apply across all categories at 160% of the per person double price (limited availability). Taxes are an additional $450 per person.

Glasgow, Scotland/Embark the ship
Saturday, June 10: Arrive in Glasgow, where the indelible mark of Viking conquest still permeates the culture,
and embark the five‑star Le Dumont-d’Urville. Depart Glasgow accompanied by traditional melodies from a Scottish bagpiper.

Fort William for the Scottish Highlands
Sunday, June 11: In Glenfinnan, see the Glenfinnan Viaduct, immortalized by the Hogwarts Express in the Harry Potter film series, and the Glenfinnan Monument commemorating the Jacobite Highlanders that rallied against King George II. See Neptune’s Staircase, the longest staircase lock in Britain and an incredible feat of engineering. Explore Glencoe, one of Scotland’s most scenic landscapes. Attend the Captain’s Welcome Reception on board the ship this evening.

Kyle of Lochalsh/Isle of Skye
Monday, June 12: Visit Eilean Donan Castle, one of the world’s most recognized castles—located on a little island where three sea lochs meet in the midst of some of Scotland’s most dramatic scenery. Travel through the beautiful Cullin Mountains to the Isle of Skye’s scenic coastal capital of Portree.

Kirkwall, Orkney Islands, for Ring of Brodgar and Skara Brae
Tuesday, June 13: This morning, the director and head archaeologist of the Ness of Brodgar site, Nick Card, will provide insight on this impressive ancient compound that lies outside of Kirkwall. Visit the Neolithic Heartland of Orkney, a UNESCO World Heritage Site, and view the ceremonial Stones of Stenness and the Ring of Brodgar henge. Continue to the early Orcadian settlement of Skara Brae, then visit St. Magnus Cathedral, also known as the “Light of the North.” Hear the iconic sounds of a Scottish bagpiper as you reboard the ship in Kirkwall. This evening, enjoy a storyteller’s performance of traditional Scottish tales.

Cruising Sognefjord, Norway/Flåm Railway
Thursday, June 15: Cruise Sognefjord, passing traditional farmsteads and villages flanked by soaring mountains
and glaciers. This afternoon, board the Flåm Railway, one of the world’s most scenic train journeys, traveling 13 miles through 20 tunnels to Myrdal’s mountaintop station.
Watch as mountains and waterfalls—including the awe‑inspiring Kjosfossen—unfold along
this branch of the world-renowned Bergen Line alongside intriguing hamlets.

Edinburgh and Glasgow
June 6 to 10, 2023
Discover two of Scotland’s greatest cities and their histories of clans, medieval knights, and royal intrigue on a three-night itinerary that includes visits to Glasgow and Edinburgh. Explore the heart of Scotland and see the sites of Trossachs and the Stirling Castle. Visit the Kelvingrove Art Gallery & Museum. Accommodations are in the ideally located Sheraton Grand Edinburgh.

Wonders of Norway
June 17 to 22, 2023
Our five-night itinerary extension explores the Norwegian highlands and the scenery of Europe’s highest mountain plateau on the Bergen Railway. Visit Stalheim and Oslo—taking the Bergen Line train from Voss to Oslo—concluding your tour with a cruise along Copenhagen’s canals, passing the Naval Church. Stay in historic hotels and spend one night aboard an award‑winning Seaways ferry.

Further details will be provided with your reservation confirmation.