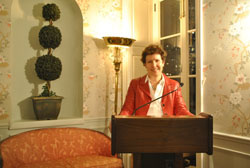 The 113th AIA/APA Joint Annual Meeting is almost here! From January 5-8, we will convene in Philadelphia for our premiere academic event.

All of the paper sessions are heartily endorsed by the PAMC, so you can be assured that they are all of the highest academic quality. In addition, we asked a couple of experts for their opinions as well. Carla M. Antonaccio, Department Chair and Professor in the Department of Classical Studies at Duke University, says, “As a member of the Duke faculty, I have to recommend the Gold Medal Colloquium, since it honors our own Larry Richardson, Professor Emeritus in the department.  In addition, I’d say that Session 3F: Silent Participants: Terracottas as Ritual Objects, and Session 4E: Staging Death: Funerary Performance, Architecture and Landscape in the Aegean look particularly interesting to this archaeologist. But, of course, there are many others, too!”

For those fascinated with the trade and cultural connections between Minoan Crete and Egypt in the second millennium B.C., Shelley Wachsmann, Professor of Biblical Archaeology in the Nautical Archaeology Program at Texas A&M University, recommends Session 4D: Contacts and Exchange in the Eastern Mediterranean. He suggests beginning with the lecture entitled Minoan-Egyptian Relations Revisited: The Warrior’s Tale by Tristan Carter, then attending The Good, the Bad the Keftiu: The Concept of the “Good” Foreigner in New Kingdom Egypt by Beth Ann Judas. Sandwiched between these is another lecture—Šrdn of the Sea’: A Reassessment of the Sherden and their Role in Egyptian Society by Jeff Emanuel—which deals with another fascinating group, the Sherden, who were a principal component of the enigmatic collations, commonly known as Sea Peoples. This ethnic group played a significant role in bringing down the curtains on the Late Bronze Age in the eastern Mediterranean, ca. 1200 B.C. As Professor Wachsmann says, “Three aces in a row— hard to beat that.”

On Saturday, January 7, be sure to attend what will be a highlight of the Annual Meeting: AIA President Elizabeth Bartman’s Plenary Session: Death and Burial.  “Death and Burial” inaugurates a series of presidential plenaries that in successive years will investigate major themes of archaeology. The cross-cultural programs will highlight how new theories and methodologies can invigorate well-known, even clichéd, themes. The mix of presenters with expertise in both the Old and New World will demonstrate the diversity of approaches to a subject that remains of fundamental and abiding interest to all. Speakers include:

The variety of topics being presented at this year’s program will not disappoint your thirst for archaeological scholarship and ideas gleaned from around the world. For a preview of the program, click here. We look forward to seeing you in Philadelphia next week!