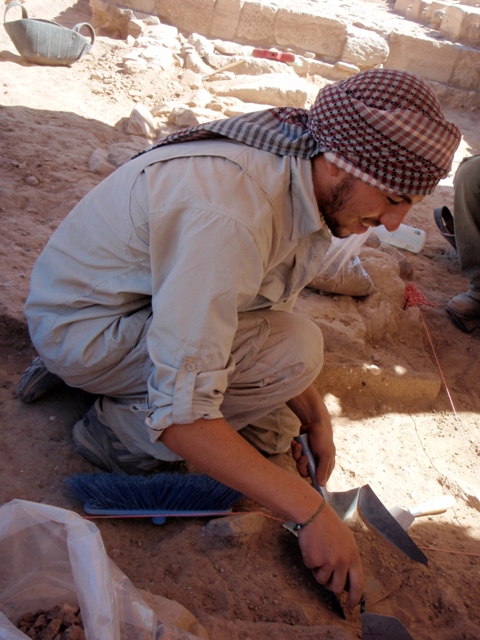 This summer I participated in the archaeological excavation at the Petra Garden and Pool Complex in Petra, Jordan under the direction of Leigh-Ann Bedal of Penn State Erie-The Behrend College. The Pool and Garden Complex was constructed by the Nabataeans sometime in the late first century B.C. or early first century B.C. The Nabataeans were masters of hydraulics and commerce who ruled the area by controlling a series of oases along the local trade routes. The presence of a nearly Olympic-sized swimming pool, along with a garden and the water required to keep it alive in the middle of the desert, would have definitely been a show of power and prestige by the Nabataean rulers at Petra.

The field school was run by the University of British Columbia and was directed by Jennifer Ramsay. We worked six days a week in the field for seven hours a day in temperatures climbing over 100 degrees. This in and of itself made the work extremely difficult. On site, I worked side by side with other students, professors, and local Bedouin workers to recover architectural pieces, pottery, lamp fragments, coins, and other artifacts. I learned excavation techniques using a trowel as well as large hand tools (shovel, hoe, and pick). I became familiar with surveying methods and did several drawings in the trenches. Working in the garden area was much different than the pool because instead of objects in the soil being the artifacts the soil itself was the artifact. I learned to discern tree and plant pits from the surrounding soil and then how to excavate and collect samples from them. I was also taught how to distinguish the various layers of occupation in the garden area. In the afternoons and evenings I washed and was taught how to analyze pottery and other artifacts, and all the students learned the flotation technique for soil samples. I helped complete all of the paperwork for my trenches and wrote in the daily journal. I drew coins, figurines, and scale drawings of the trenches. There were lectures three nights a week on subjects ranging from local history and culture to Roman art history to GPS and archaeobotany.

On the three days I had off, I was able to visit some unforgettable places. I travelled to Aqaba and went snorkeling in the Red Sea. I floated in the Dead Sea and was covered in Dead Sea body mud. The group visited Wadi Rumm, and we went on a jeep tour of the desert and camped in the desert. I was also able to form strong bonds with the Bedouins whom I worked with every day. They invited us into their homes for tea and coffee and brought us into the desert at night to have campfires and tea. Some of the workers took us by donkey to see other nearby monuments, such as Aaron’s Tomb and the Monastery of Petra. We all were able to go to a Bedouin wedding and had a barbecue in the desert with many of the Bedouin from the village we lived in on one of the last evenings. This cultural immersion was just as important to my experience in Jordan as was the study and work. Not only was it helpful to me personally to make friends, but also they have lived in the site their entire lives and were able to teach me about the site with their personal expertise.

After a month’s worth of hard manual labor, tedious detail work, and paper work in the desert sun, you might think that I would never want to participate in an archaeological excavation again. But I do. I had never fully appreciated how much math, science, and problem solving was involved with an excavation. Field archaeology allows me to incorporate these things that I truly enjoy with the history, foreign language, and cultural studies that are my passions. I am extremely grateful to the AIA for their support of my studies and giving me the opportunity to participate in this amazing experience.