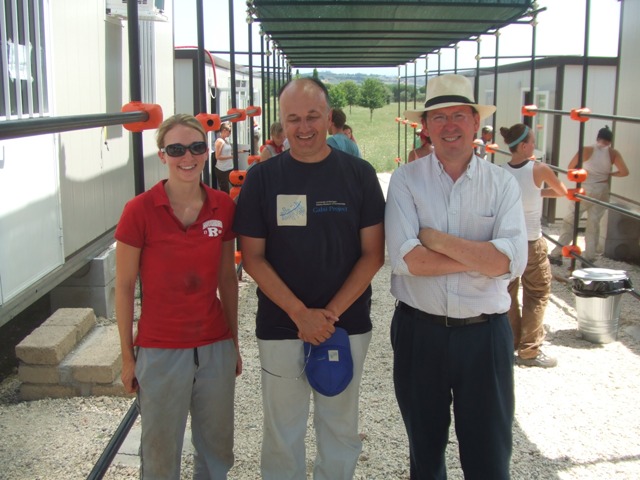 This summer I was fortunate to be able to participate in the Gabii Project, directed by Nicola Terrenato of the University of Michigan. It was the inaugural excavation season at Gabii, an ancient Latin city located 20 km east of Rome. The field program was intensive and provided hands-on experience in excavating, pottery washing and sorting, and topography. Furthermore, lectures twice a week on various topics such as the Harris-Matrix and the history of the Etruscans provided additional insight into archaeological methods and history.

This was my first excavation and I was not sure what to expect upon arriving at the site. I knew it would be hard work, but it was much harder than I anticipated. All participants received their own trowel and were instructed on how to use pick axes, shovels, and wheelbarrows. We worked from 7:30 to 4:15 five days a week, having a mid-morning break and an hour long break for lunch. There were a few days that reached 90 degrees and at one point a heat advisory prevented the team from working in the field. Despite these conditions, the work was incredibly rewarding. I now have a greater appreciation for the physical duties that archaeologists perform.

The site was divided into three areas: Area A, B, and C. I worked in area C, in which my group discovered several late antique walls. Upon finding my first pottery sherds, it was exciting to realize I was the first person to touch objects that had been buried for at least several hundred years. However, excavation can be quite grueling work and I found myself preferring work in the “finds” lab.

The “finds” lab was located in a shaded area, which the group nicknamed the “pottery barn.” This is where we washed pottery sherds, bones, and miscellaneous materials found in the field. The washed materials were laid out to dry on racks and labeled with the section unit in which they were found. In this lab I learned about different types of pottery such as terra sigillata and bucchero and was soon able to make my own identifications at sight.

As if excavating at Gabii was not exciting enough, the site’s proximity to Rome allowed me the opportunity to explore the “Eternal City” on the weekends. As an art history major, this was invaluable to my studies. I am interested in Roman sculpture, particularly sarcophagi, and being able to view such works first hand helped me to consider a topic for my art history thesis. As of now, I am considering researching mythical depictions on Roman sarcophagi.

The experience was a great opportunity for me and I am grateful to the AIA for providing me with the Waldbaum Scholarship. By participating in the project I realized that archaeology is not a field I want to pursue full-time. I learned that I am more interested in pursuing a classics or art history field in my future studies. That said, I am excited to see how future seasons at Gabii develop and would love to participate in another excavation sometime in the future, whether at Gabii or elsewhere.