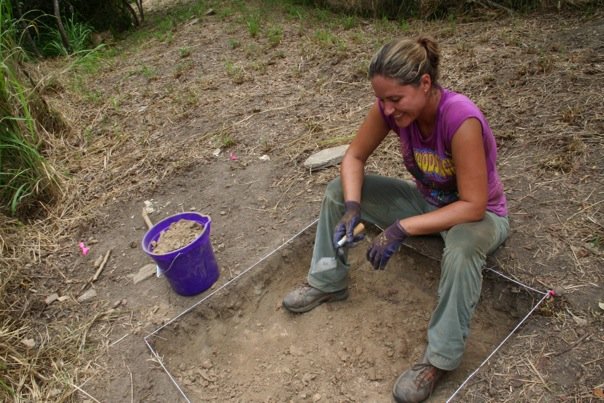 Roatán Island, the site of my first archaeological field experience, is the largest of the three Bay Islands of Honduras, nestled between Utila and Guanaja. Though less than 40 miles long and only five miles wide, Roatán has a rich and complicated history; one that is more vast than its landmass would suggest. According to many locals, pirates inhabited the island at different points in time, hiding their stolen treasure in the cool, dark caves in the hillsides. Some claim the famous pirate Henry Morgan actually left his entire stash behind when he sailed away from the island, never to return. Historical records show that Christopher Columbus visited nearby Guanaja on his fourth voyage. Fernando, his son, wrote that while on the island, they witnessed the arrival of a Maya trading vessel, suggesting that the Maya had close ties with the Bay Islands. Beyond his account, this claim has never been substantiated, but it has formed a base for those who want to believe the Maya were the original inhabitants of Roatán.

Today, Roatán is a popular location for cruise ships to dock and is perhaps best known for the spectacular reef diving available right off the beach. For this reason, the island has become a tourist destination, and is rapidly losing what is left of its heritage. In their pursuit of treasure, islanders and tourists alike have scoured every inch of the island, looting the remnants of both historic pirate plunder and prehistoric indigenous material culture. Previously undisturbed land has been targeted by developers for large resorts and condominiums. In the process of building, many of these entrepreneurs have completely destroyed whatever was left of prehistoric sites. It was a combination of these factors that brought our program to the island. For all practical purposes, we were essentially conducting salvage archaeology, hoping to collect whatever remained of the prehistoric cultures that once thrived on the island. We were also seeking to piece together the past, one tiny ceramic sherd at a time. There is so little evidence to be found about the earliest cultures of the Bay Islands beyond hearsay and rumor that our job was especially difficult. We wanted to determine, once and for all, who the original people of Roatán were. We were interested in discerning more about their culture, including their settlement patterns, daily life, economics, and worldview. In order to do this, we were split into three groups; survey, excavation, and lab.

For the first and fourth weeks of the program, I was assigned to do survey. Our team conducted both random, unsystematic survey and nonrandom, systematic survey of the hillsides and roads near the main site of El Antigual. We also surveyed areas farther from the primary site in order to get a feel for where other settlement or ceremonial areas might have been located. For the most part, we only collected artifacts from an area once it had been established that an actual site existed. Incredibly, the majority of the time, we catalogued more than one site per day. This was evidence that the earliest inhabitants of Roatán made use of most of the land on the island. We also filled out damage assessment reports in order to record the extent that a site had been destroyed. This was often almost complete, as was the case when structures were built on top of a portion of the site, or when a road was put directly in the middle of it. Other times, the damage was limited to the effects of cattle grazing and agriculture. We even did our own exploration of a few caves, a couple of which contained evidence of prehistoric ceremonial practices. This led us to believe there may have been Mesoamerican influence on the island. The work we did during survey was perhaps the most strenuous, but it was thoroughly enjoyable and rewarding.

The second and fifth weeks of the program, I was part of the excavation team, working on individual units at the main site of El Antigual. We were very systematic in our approach, building one trench that spanned the entire site, and excavating every other sub-op. Later, we put transects off of the main trench in areas that appeared to have possible terracing or those that were at the bottom or top of a hill. In most cases, erosion was a factor during the project because of the undulating hills of Roatán. At times, we also faced impenetrable layers of shale, which kept us from digging as deep as we would have liked. All in all, however, we recovered many ceramic artifacts, a decent amount of carbon, and a small piece of bajareque, or wattle-and-daub construction material. The mixture of types, pastes, and tempers of the ceramics we collected suggested that we were dealing with a possible midden or a ceremonial site rather than a residential area. Many of the sherds had been burned, further supporting that hypothesis. The presence of the building material hinted at the possibility that one structure had existed at the site, but we were unable to find any evidence of architecture. Perhaps the most exciting aspect of excavation, however, was the presence of carbon, as it gave us the opportunity to possibly determine the age of the site at some point in the future.

During the third week of the project, I was assigned to the lab, where we washed, labeled, categorized, drew, and analyzed the ceramics we had found in survey and excavation. The process was an incredible learning experience, as we were made to follow the steps repetitively until it became rote. Drawing was perhaps the greatest challenge, as we had to illustrate many different decorated sherds to scale, both as we saw them and at the angle they would have fit into the original vessel. This taught me to visualize the pottery sherds as elements of intact artifacts, rather than as mere pieces. In this way, we were able to discern a more thorough story from each of the sherds. This portion of the program gave me a thorough understanding of the importance of properly analyzing and recording the material culture collected in the field.

The final week of the field school, I was scheduled for more work in the lab, but political issues on the mainland of Honduras interfered with our ability to continue the project. A military coup had taken place at the end of June, and because of uncertainty as to the effect this would have on the island, our program was evacuated by the university. We managed to complete all the work that was required of us, however, through the use of the internet and research materials.

While it was incredibly disappointing to leave early, I feel that I garnered everything I could have from the program, both in terms of the experience I gained as well as the amount that I learned. Our original questions remain unanswered, but we had not truly expected to unearth all the details of a complex prehistoric culture during one field season. The research design remains in place, and provided the tumultuous political affairs of Honduras settle down over the course of the next year, the project will be continued next summer. With a pickax in one hand and a trowel in the other, armed with a comprehensive knowledge about the island and its history, those who work on Roatán will slowly reassemble the pieces of a culture and a people that could otherwise be lost forever to the insatiable hunger of development.