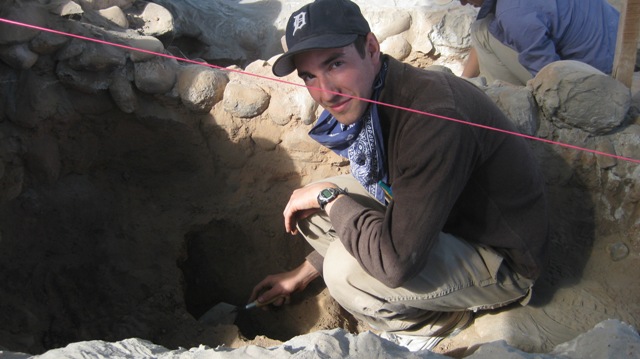 I attended the Misti Archaeological Project field school with the intent to expand my studies of zooarchaeology to the Andes, and to apply the copious body of theory, in which I was immersed during my undergraduate career at the University of Chicago, to the Middle Horizon (ca. A.D. 600-1000) cultures in Peru, the focus period of the project. This prehistoric period was defined by two polities: Wari in the north and Tiwanaku in the south. Their exact cultural natures is quite hotly contested, and thus the Middle Horizon is an adventurous and thrilling chronological setting for a field-school experience. The Misti Archaeological Project, which excavated the site of Millo 2 in the Vitor Valley (just south of the modern-day city of Arequipa), was looking at the interaction between Wari and Tiwanaku (and also local cultures) in a borderland region.

Zooarchaeology, which is my primary field of study, is interesting in such a context because one can investigate the diachronic and spatial changes of faunal remains, which in turn reflect upon the negotiations of animal use and disposal patterns between local, Wari, and Tiwanaku peoples. In the Andes, zooarchaeology is a much less well-developed field than in the Near East context, where I had previous experience, in part because of the paucity of domestic animal diversity—ancient Andean cultures domesticated only four animals: the dog, the muscovy duck, the guinea pig, and camelids (e.g. llamas, alpacas). Nevertheless, these animals have had important positions in Andean culture in the ethnohistorical and ethnographic records with respect to both economic and ritual behavior. Thus, faunal analysis is a crucial yet rarely explored avenue of study in the Andes. An intensive study of the Middle Horizon faunal record at Millo 2, for its part, would provide a unique insight into the interactions between humans and animals at a site of critical juncture between two inter-regional polities.

However, my ambitions to jump immediately into the faunal analysis were complicated by more pressing issues. The project dealt with personnel shortages, sickness, faulty GPS coordinates, and a host of other issues all too common to the first season of any archaeological excavation. These problems stymied work and progress and, although the project achieved its primary goals for the first season, suspended many of its secondary research goals. As a result, I was unable to perform a formal analysis of the fauna. Nevertheless, I did perform a preliminary investigation of many of the faunal the remains, mentally noting burn patterns, butchery patterns, and taxa identification for future research questions.

I learned a great deal about the intra-group dynamics of archaeological projects, and the decision-making processes inherent to modern archaeology. Because of a personnel crisis, I and three other students worked mostly independently, excavating a 2m x 2m trench in a domestic context. At first daunting, this turned out to be one of the most important lessons in my academic career. There is no better way for a student to appreciate what Ian Hodder meant by the interpretation at the “trowel’s edge” than being forced to decide for himself or herself when to cut, photograph, record, sift, remove, examine, and preserve. The destructive (or, at best, transformative) nature of archaeology requires a constant application of theory, methodology, and intuition. By working independently, I honed all three of these essential archaeological skills.

In the end, the fact that I was unable to perform the faunal analysis immediately was overshadowed by the intense, albeit unforeseen, learning experience generated by the problems inherent to first season work. Indeed, the zooarchaeological material can be examined more fully next season; I plan on returning to the project next summer to continue my faunal research.

The Misti Archaeological Project Field School, which I would not have been able to attend without Waldbaum Scholarship, provided me a most important lesson in my archaeological education. The best moments in education are when the student is faced with a critical problem demanded by the exigencies of a current situation and through hard work and perspective-changing experience is able to overcome these difficulties. Under the oppressive Andean sun, I had such a moment in the Vitor Valley.