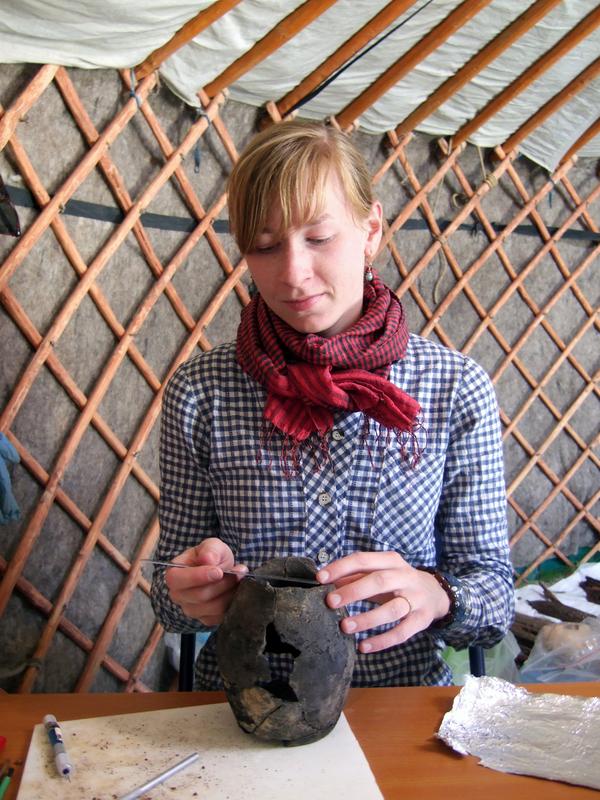 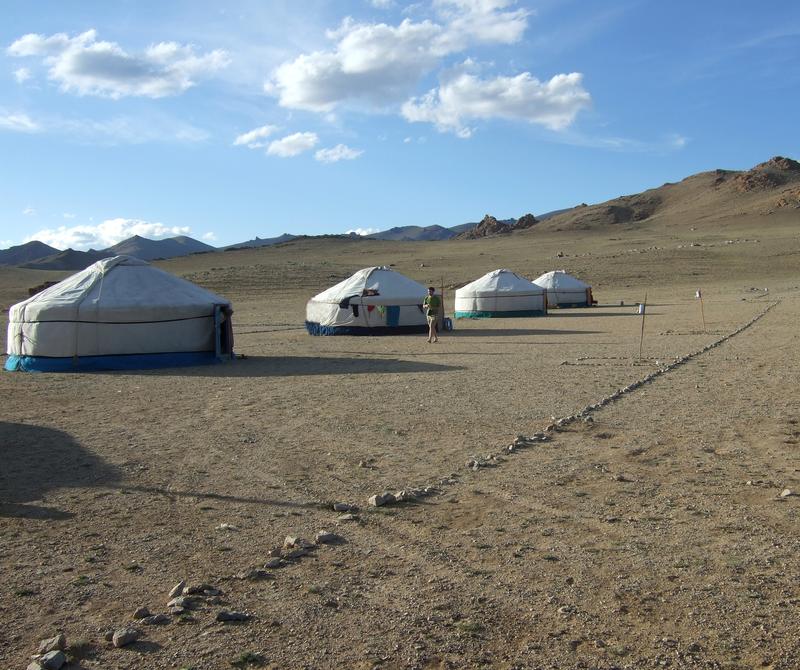 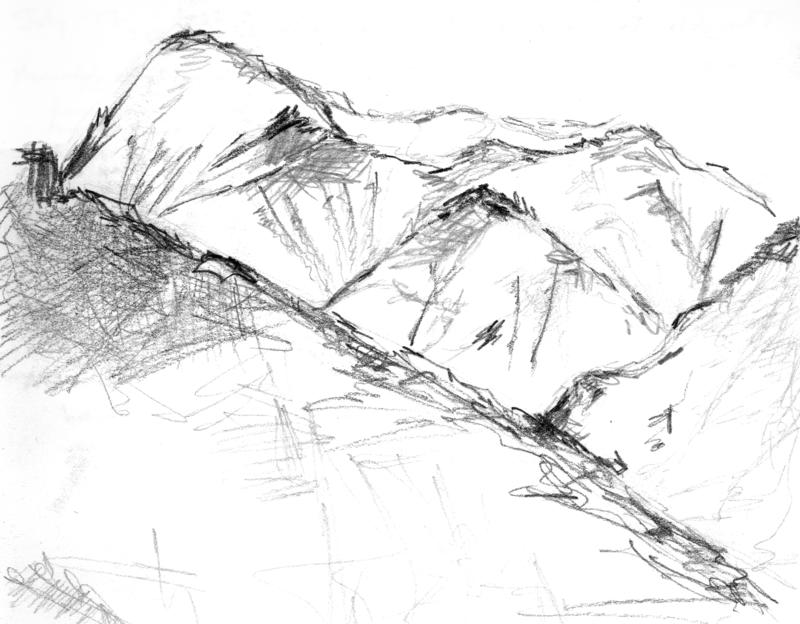 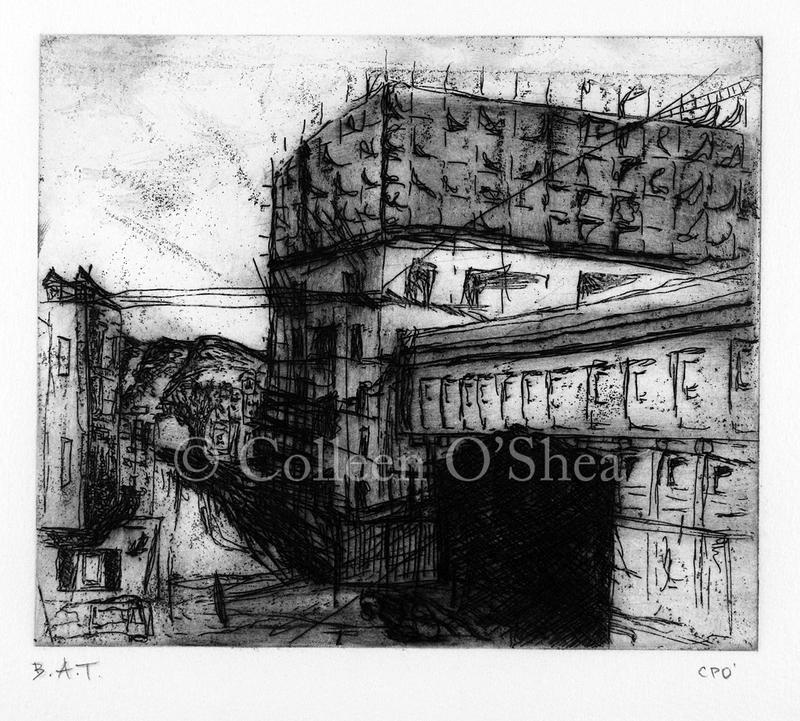 On the third day of the drive out to the Mongol-American Khovd Archaeology Project site, I realized that Mongolia was very different than I had envisioned. I was expecting windswept sands of the Gobi desert, but instead, we passed through terrain marked by rocky, lumpy boulders, endless flat steppe with a purple sky, and were currently wending our way higher up some velvety green mountains, with goats and sheep grazing in every direction. On the fourth day, our camp appeared, seemingly out of nowhere. There in far western Mongolia, high up (about 2500 m) in the red arid mountains, were the five gers (circular semi-permanent dwellings covered in felt, more commonly known by their Russian name, yurt) all in a row: the kitchen ger, staff ger, volunteers’ ger, lab ger, and the Mongolian students’ ger.  Here was our world for the next month. No phones, no internet, no running water, and only a single light bulb in each ger, powered by a generator for a few hours each night. Mountains stretched in every direction, and the glacial fed Tsenkher River wove threads in the valley below. Beyond the Dig: Scenes from Mongolia

Up and over a hill from our camp was a burial site of the Xiongnu, a nomadic steppe empire (3rd century BCE to 1st century CE). There are 34 graves at the site, which lies near the Silk Road. I was there to learn about and perform archaeological conservation in the field. The project’s director, Bryan K. Miller of the University of Pennsylvania, thought the best plan was for me to follow a tomb from start to finish, from excavation to conservation. So for the first three days, I worked alongside the archaeologists and volunteers, excavating away at what was presumed to be a child’s grave. We dug deeper and deeper, but the grave turned out to be vacant. Fortunately, there were plenty of artifacts from other graves, so I transferred to working in the lab ger under the direction of the project’s conservator, Claire Neily.

In such an arid climate, artifacts are remarkably well-preserved, but can still be very fragile, so doing conservation on site is very important to help stabilize them. I had the privilege of working on a wide range of materials, such as bone chopsticks, glass beads, gold foil ornaments, ceramic vessels, bronze mirror fragments, silk pieces, and iron objects. Claire taught me how to treat all of these objects, from mechanical cleaning with a pin vice and files to using an adhesive to consolidate flaking layers of ceramic. We did extensive documentation of the artifacts: photographing them and creating cards that indexed the artifact’s dimensions, description and condition upon excavation, our treatment, and our packing method. A bumpy car ride back to Ulaanbaatar meant that each artifact had to be well packed to avoid damage, so I learned to create sophisticated inset mounts for the more precious objects like gold foil, and to create padded mounts for the textile fragments.

I was especially excited to apply my new conservation knowledge to the task of putting together the fragments of a ceramic vessel from grave 20. The vessel was charcoal gray, presumably made locally. The top had a rolled rim, and the shoulder had a simple design of incised short diagonal strokes. It was a great responsibility to reassemble the vessel — getting around twenty degraded pieces to fit together and figuring out the order in which to put it all together in order to keep it stable — without damaging the fragments further. After some patient work, I had reassembled a 2,000 year old vessel that is only missing a few of its pieces.

We were pleased to see that the artifacts uncovered resembled Xiongnu artifacts found at other sites in central and northeastern Mongolia, thus showing continuity across vast distances. Some artifacts, like the Chinese-style bronze mirror fragments, show that the Xiongnu community at our site had a relationship with other regional powers. We stayed up late the last few nights before leaving the site, working by the light of our headlamps to get all of the artifacts packed.

When I returned to Ulaanbataar, I spent two weeks working at the National Museum of Mongolia under the direction of Ts. Egiimaa, an archaeologist and curator of Xiongnu materials. I learned how to take the artifacts from a dig and transition them into storage: in our case, this meant registering the artifacts in a database, then creating inventories of each box of artifacts, labeling each box, and sorting the boxes into the proper storage location. The contrast between working on site in western Mongolia to working in a museum was high: I could go to the store to buy supplies and I could do research on the Internet, but I couldn’t spend my lunch break hiking in the mountains.

I left Mongolia with a deep appreciation of the challenges and joys of archaeological conservation in the field. What’s more, the experience made me even more excited to enter a graduate program in conservation in order to continue learning. I am grateful to the AIA for awarding me the Jane C. Waldbaum Archaeological Field School Scholarship, which helped me confirm that conservation is indeed what I would like to do.