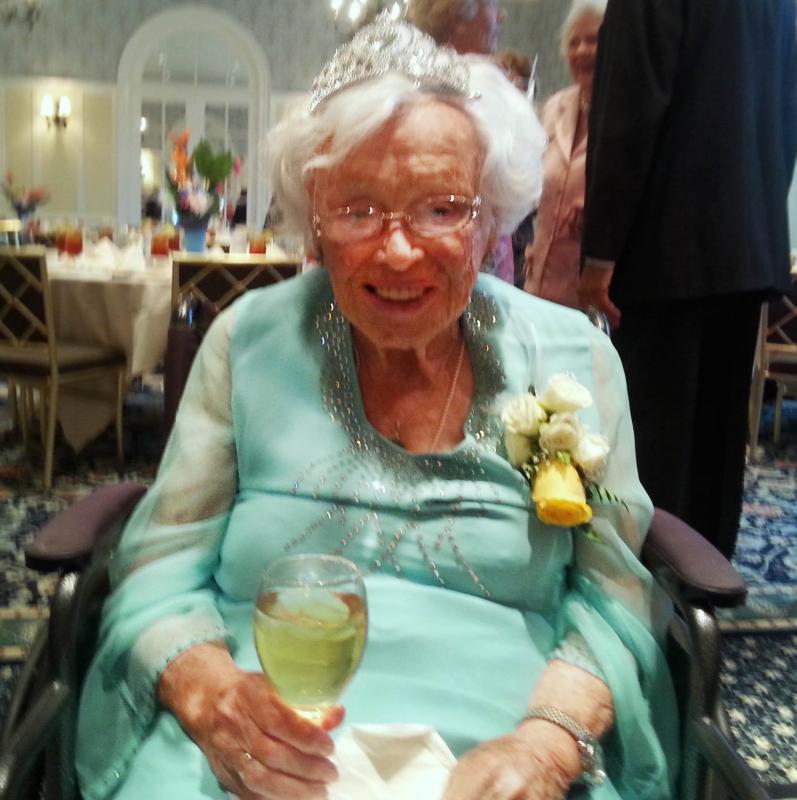 Our former Trustee Gertrude Howland celebrated her 105th birthday on July 25 in Richmond, Virginia.  This is indeed an impressive milestone.  Along with 70 other guests, my wife Barbara and I were privileged to be present at this spirited and joyful occasion.  Among those gathered together to honor Gertrude were many members of her family as well as a crowd of friends and well-wishers, including Professor Ross Holloway, whom Gertrude excavated with in Italy, as well as Mr. and Mrs. Art Cassanos and other friends from the AIA Richmond Society.

The event took place at the Lewis Ginter Botanical Gardens, an appropriate setting given Gertrude’s love of flowers.  The reception was followed by a celebratory dinner at which many tributes were offered to Gertrude.  And, of course, there was a splendid cake with candles that Gertrude blew out with aplomb.

Gertrude has served the AIA in many capacities over decades, as an astute Trustee, President of several societies, and staunch supporter in difficult times.  In recognition of her outstanding service the AIA honored her with the Martha and Artemis Joukowsky Distinguished Service Award in 2003.

Her interest in archaeology began at the youthful age of three.  Every Sunday she went to her grandparents’ house for dinner and after being “bored silly by the interminable yakking of the adults,” her grandfather would assuage her boredom by taking her into the library and showing her pictures of archaeological excavations published in National Geographic, Asia, and other magazines. Such started a life brimming with curiosity, wanderlust and a passion for archaeological exploration.

Gertrude modestly describes her impulse to join as a volunteer Ross Holloway’s excavation of the Athenian Agora in 1965 as “I just wanted to see what a dig was like.”  And see she did! Gertrude went on to take courses in archaeology at Columbia and New York University and learned the delicate art of conservation along the way.  Over the years she has achieved an international reputation for herself as a conservator specializing in the restoration of ancient pottery.  She has excavated for 32 seasons on 9 different archaeological sites from, as she puts it, “Majorca to Jerusalem” including several seasons spent in southern Italy at Satrianum and at Buccino, where an Italian politician sent word, via Ross Holloway, of his desire to marry her.  Gertrude thinks “he set her eyes on her once.”  From Italy she went to Jerusalem where she restored the pottery from Ashdod.  Later excavations brought her back to Italy, at Cosa, and then on to Split, to Sardinia, and to Majorca where she helped establish a local museum at Pollentia.  The pots she conserved may be viewed there today.

Throughout a lifetime of travel and adventure, Gertrude has maintained an active interest in the mission and programs of the AIA.  She first served as an AIA trustee from 1968-1970 and she is particularly distinguished as the AIA’s first Society Trustee, an important position designed to address the needs of our local Societies and to link these Societies more closely to the national organization.  Gertrude was also instrumental in establishing the James R. Wiseman Distinguished Book Award and has served as a valued member of several committees.  She has also found the time to be active in local AIA societies, first in Greenwich, Connecticut and in Richmond, Virginia where lecturing archaeologists will attest to her gracious, welcoming hospitality.

Former AIA President Martha Joukowsky comments “To my mind, Gertrude is indelibly marked by her devotion to and time spent supporting archaeology and the AIA in particular.  Her enthusiasm and humor is only outshone by her overall loyal devotion and commitment to the Institute.”

All of us in the AIA join in saluting our most senior member and wish Gertrude Howland many more happy birthdays to come.