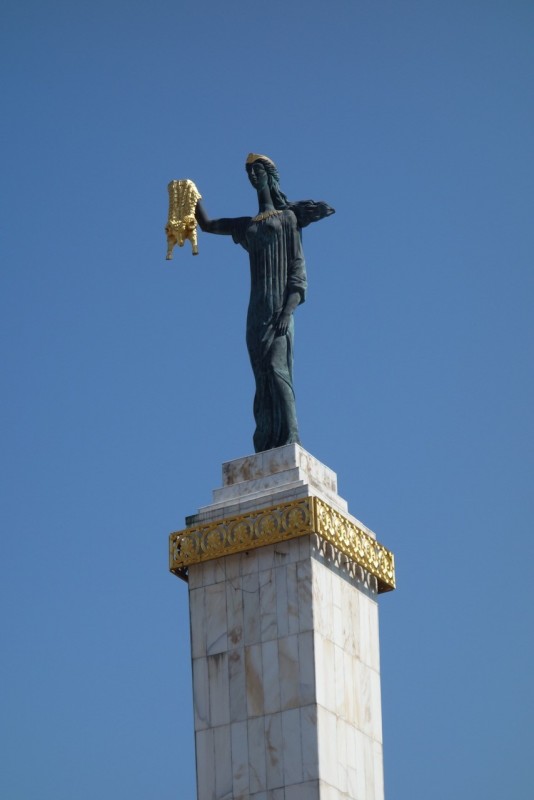 I recently led an AIA group on a cruise circumnavigating the Black Sea, counterclockwise. Along the way, we visited Turkey, Georgia, Ukraine, and Bulgaria, and we noticed how each one of these “young” countries drew on its ancient history in order to craft a modern image. But the biggest surprise came in Georgia.

The people of Batumi, the bustling Black Sea port of the fledgling democratic state of Georgia (formerly a Soviet Republic), have chosen to honor a figure from Greek mythology, Medea, in their beautifully old-world town square. She stands on a pedestal, gilded and gleaming in the sunlight, in the middle of the central square in Batumi, Georgia. Do you remember the story of Medea? In sum: she is a sorceress and helps the Greek hero Jason get the golden fleece (which the statue holds), but also chops up her brother, makes Jason’s uncle into soup, sets Jason’s new girlfriend on fire, and finally kills the sons she had with Jason with her own hands. Why would anyone want to identify with this most barbaric of Greek villains?

I asked our local guide this question. She admitted that yes, there is some controversy over the statue, that Medea may not be the right symbol for Batumi, but, she explained, others say she did all those bad things for love, so that makes it ok. We had to get back on the bus, so I didn’t have time to argue about Medea’s motivations.

What this and other less dramatic encounters on the trip showed us is that the past remains vital to the present. In Georgia, an ancient figure has taken on new meaning in the context of nation building: Medea has become a symbol of their determination and resourcefulness. Her story has evolved to support the aspirations of country reinventing itself, shedding its Soviet past.

Or maybe the message is, “Don’t mess with Georgia.”