AIA Tours: Highlights of Morocco: From the Desert to the Sea, October 2016 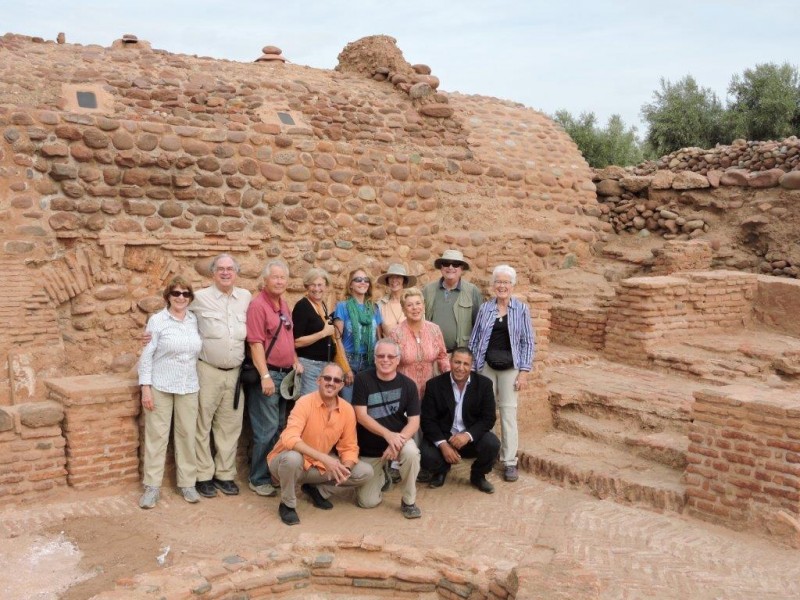 What a wonderful experience and opportunity leading this AIA tour was! Morocco is a magnificent country in which to see the whole sweep of history, from the villages of indigenous Berber people (the Imazighen) to the impact of the Phoenicians and Romans; the coming of the Arabs bringing Islam in the seventh century; and the development and growth of cities including Fez with what is probably the oldest university in the western world (Al Karaouine founded in 859). We had the opportunity to see and learn in some depth about three major archaeological sites—the large Roman city of Volubilis, Sijilmasa located at the northern end of one of the trans-Saharan trade routes, and Aghmat, the city that briefly served as the capital of Morocco before the Almoravids moved their center to the new city they developed in the eleventh century—Marrakech. In addition we saw numerous other treasures also—including Chellah (just outside Rabat) with its Merenid necropolis constructed over Roman ruins, and the ancient khettera (qanat) system of channeling water underground using gravity in the arid region south of the Atlas Mountains. We could trace so clearly in the landscape the impact of the different Berber and Arab dynasties and later of the French, especially after they established a Protectorate over Morocco from 1912-1956. So much has happened since independence too in terms of development—different means of transportation and the extension of electricity, running water, and satellite communication, etc. to almost everyone in the country.

The mosques, such as the new Hassan II mosque in Casablanca, modeled after the beautiful 12th century Koutoubia mosque in Marrakech, and the traditional Islamic colleges, such as the Al-Attarine Madrasa in Fez, the Ben Youssef Madrasa in Marrakech, and the small jewel of the Abul Hassan Madrasa in Salé are all superb examples of Islamic architecture. Another treasure consists of Morocco’s museums, including the Museum of Moroccan Judaism. Morocco was home to the largest Jewish community in the Muslim world—some 250,000-350,000 before the vast majority left beginning in the 1940s. The opportunity to see both pictures and artifacts from some of the large number of synagogues, mellah (Jewish quarters), and cemeteries was a great treat!

Morocco has so much to offer: medieval cities with their walls, impressive gates, and ancient medinas; old caravanserai, some transformed into museums; stunning kasbahs and homes hidden behind nondescript walls, spectacular mountains, gorges, and sand dunes; intricate and beautiful craftwork, carpets, and jewelry; delicious food (and yes, wine as well, from the vineyards near Meknès); fascinating traditional markets; and warm, hospitable people. No wonder Morocco is the number one tourist destination in Africa!

One of the best things about traveling with the AIA is that the group had access both to experts on the historical sites and entrance to one site that has not yet been opened to the public. In Sijilmasa, the group was extremely fortunate to have Dr. Jim Miller, co-author with Dr. Ron Messier on the definitive book on the city, lead us around and explain the most significant parts of this huge site. In Aghmat, Bernard Morin, a French painter and artist, enabled us to learn far more about the site than would otherwise have been possible. Indeed Aghmat, where Dr. Messier has directed the excavations for more than ten years, has just been awarded an AIA and Hilton Worldwide Award Site Preservation Grant to help preserve its major buildings—a hammam (public bath), the grand mosque, the adjoining ablution hall, and the royal palace.