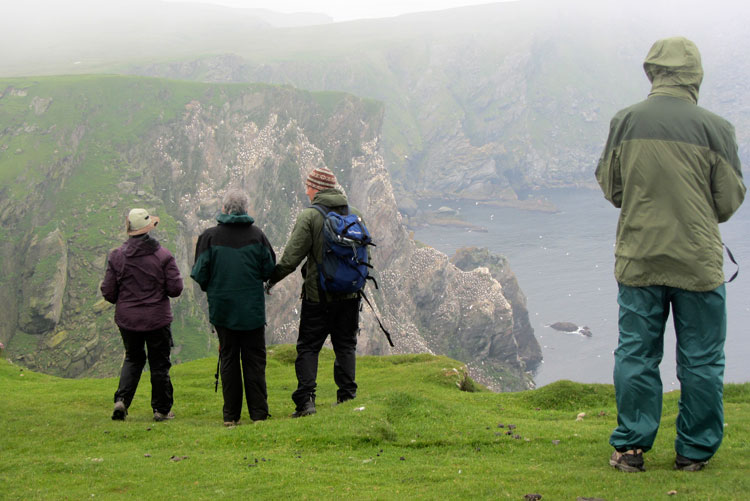 Day 4: Wednesday, June 19
The Broch of Gurness, also known as Aikerness broch, was our first stop for today. We made sure to be there when it opened and we were the only visitors on this magnificent site, which includes the broch surrounded by a settlement and protected by a deep ditch. Gurness is located opposite the Midhowe broch on Rousay, which we visited yesterday. We then drove across Orkney Mainland to Yesnaby and began our coastal walk, with spectacular views of cliffs and headlands and a profusion of wildflowers. We had lunch at the broch of Borwick, not far from the start, which energized us for the rest of our walk. From the high point on the walk we looked down to the Bay of Skaill and the Neolithic village of Skara Brae. Everyone agreed that this was an excellent place to build your house, and so thought the Neolithic people too. Skara Brae is a gem of a site with so many houses still showing details like dressers, shelves, and beds.

Day 5: Thursday, June 20
We took the ferry across Skapa Flow to the Island of Unst. This is the least cultivated island with the highest hills of the Orkney archipelago. After arriving on the island we drove north through moor land and hills covered in heather. Purple wild orchids were flowering in the verges everywhere. Our first stop was the Dwarfie Stane. This is the only known rock-cut tomb in Britain. The tomb has 18th and 19th century graffiti, including an inscription in Persian calligraphy that states “I have sat two nights and so learnt patience.” We continued our journey to Rackwick for the walk to the Old Man of Hoy, a remarkable red sandstone pillar which stands 137m high and is the best known sea stack in Britain. This is a beautiful walk on top of the cliffs. We were lucky, because mountaineers where climbing the Old Man when we got there. After dinner in the hotel we boarded the overnight ferry to Shetland.

Day 6: Friday, June 21
We arrived in Lerwick early in the morning, and after breakfast we headed south to the Iron Age village of Old Scatness, which was discovered during construction of an access road to the airport in 1975. Excavation of the site began in 1995 and 11 years later the remains of an Iron Age broch and surrounding village were uncovered. The site is closed to the public, but we got a private tour of the site from local archaeologist Chris Dyer. Shetland is famous for the puffins that breed along the coast, and the best place to see them is Sumburgh head. Luckily, they put in an appearance for our group. We then boarded the boat to the isle of Mousa to see the best preserved Iron Age broch in Britain. The broch still is 44 feet high, probably its original height, and many original features remain. You can still get to the top of the broch via steps between the outer and inner walls, and so most of us climbed up to survey the view. After dinner in our hotel, we celebrated the fact that this is the longest day of the year with a fire on the beach.