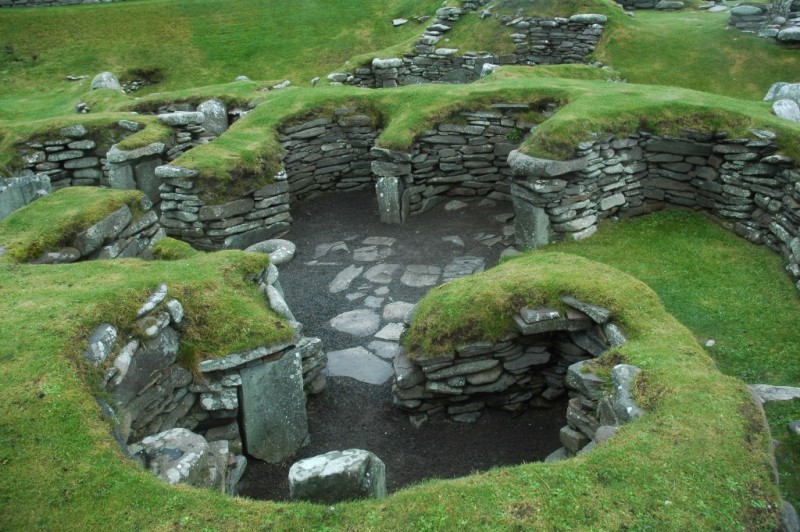 The AIA hiking trip to Orkney and Shetland is articulated by ferry trips, giving a real feel for island life. Ferries of all sizes link the islands to the mainland of Scotland, and to each other, from the tiny foot ferry to Mousa in Shetland, to the luxurious NorthLink ferries which run between the islands and the city of Aberdeen, and although the weather for our trip was mixed, all the ferry crossings were beautifully calm.

Our first day was wet, with a rainy introduction to the wonderful site at the Ness of Brodgar from director, Nick Card. All the students and diggers had been told to stay home, but Nick kindly showed us the spectacular Neolithic site anyway. However, it was followed by drinks and dinner at the luxurious Lynnfield Hotel, to warm us up, and the succeeding day in Rousay was sunny and breezy, with a visit to another site, this time multi-period, under excavation at Swandro, followed by the stalled cairn and broch of Midhowe. Skara Brae held fair the following morning, though we got drenched on our walk to the Broch of Borwick and once again needed warming up on our return to the hotel! Hoy and its extraordinary rock-cut tomb, the Dwarfie Stane, were our final Orkney stop, before heading off overnight to Shetland.

Shetland was spectacular, as always. Starting in the morning of the first day with the Iron Age broch and settlement at Old Scatness, we were able to get to Mousa to visit the most intact broch tower in Scotland that afternoon. Calm weather followed us throughout this part of the visit, and we progressed on to Unst, the most northerly island in the British Isles, to visit Viking longhouses, and the gannet colony at Hermaness. A longish walk took us out to the haaf fishing station at Fethaland, where the 19th-century fishermen left in open rowing boats for the North Atlantic deep sea fishery, and the nearby Viking Age soapstone quarry. Those who liked lighthouses walked a little further, whilst the cliff-phobic lounged on the shingle beach watching the seals.

The final day of the trip brought us to the multi-period settlement of Jarlshof, occupied from the late Neolithic through to the 17th century. A quick visit to the puffin colony on Sumbrough Head was followed by lunch on St. Ninian’s Isle, a visit to Lerwick museum, and the ferry to Aberdeen.

As always, the trip was great fun; the small group were good sports about the inevitable Scottish weather, and the sites and landscapes were spectacular. This area, now peripheral in our modern society, was a focal point in the European prehistoric and early historic world, and is always worth a visit.

You can join me in June 2017 for an archaeological hiking tour in Scotland’s Western Isles, or join my colleague, Val Turner, on this Orkney & Shetland Islands hiking tour in July 2017! For further information, please contact the AIA Tours office at aia@studytours.org or (800) 748-6262.