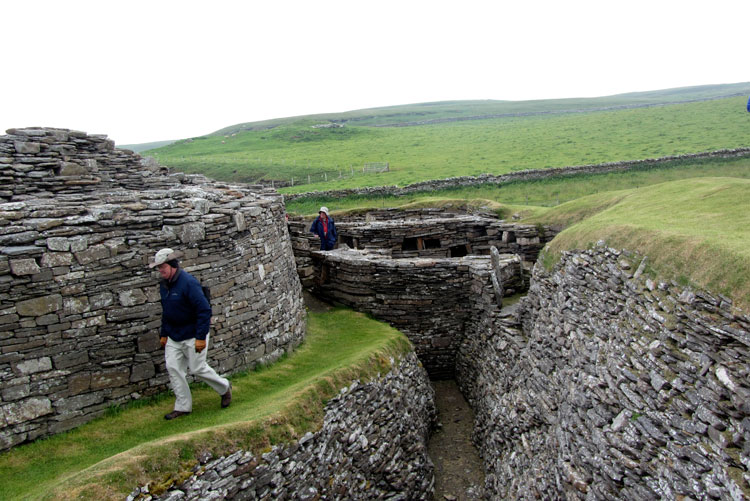 On the first day of the tour, we sailed north from Aberdeen to Kirkwall. The sea was flat calm as we cruised north up the east coast of Scotland. After six hours we arrived at Kirkwall, the main town and capital of Orkney.

Day 2: Monday, June 17
Today we headed for the heart of Neolithic Orkney. In the west of the mainland there is an isthmus of land between the Loch of Harray and the Loch of Stenness that contains the best Neolithic monuments in northwestern Europe. We started at the magnificent Ring of Brodgar, the third biggest henge in Britain. After that we went to the Ness of Brodgar, where a huge excavation of Neolithic structures takes place every summer led by Dr. Nick Card. After that, we hiked to a Neolithic village called Barnhouse, and then on to the Standing Stones of Stenness. AIA lecturer/host Dr. Mary MacLeod Rivett is accompanying us on our hike, describing the monuments and explaining their relationship to the landscape of Orkney. The weather was sunny and bright all day. We enjoyed lots of wildflowers and throughout our two-mile hike we could hear the calls of birds like oystercatchers, curlews, and skylarks. After lunch by the Loch of Harray we visited Maes Howe, the finest Neolithic tomb in Britain. Built over 5,000 years ago from local sandstone, we learned about its alignment to the winter solstice, its drystone construction, and the amazing Viking runes inscribed on the inside. In the evening, Dr. Nick Card gave us a lecture about the Ness of Brodgar site, described by Mary as the “the most important archaeological dig going on in Britain at the moment.”
Day 3: Tuesday, June 18
Today we headed for Rousay, a hilly island to the north of the mainland. Our ferry took about 30 minutes to cross Eynhallow Sound, and we enjoyed great views of the small islands Egilsay and Wyre (Wyre is populated by just 16 people!). After a short drive to the western part of Rousay we went for a three-hour hike along the coast. The walk was packed with archaeological interest. We visited Moa Ness, a site with Viking and Pictish graves; as well as two abandoned farmsteads called Skaill and Brough that have their origins in the Norse period. We visited the remains of a Norse hall, the broch of Swandro, and the Rowiegar chambered tomb. The hike culminated in a visit to the huge, stalled chambered tomb of Midhowe and the magnificent Midhowe broch. In terms of wildlife, we saw seals, lapwings, curlews, fulmars, great backed gulls, and a nest of crow chicks in a small niche in Midhowe broch.