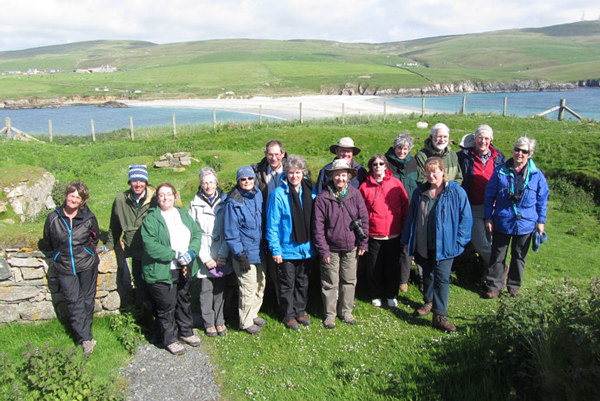 We left early for our day on Unst, the most northerly inhabited island of Shetland. We took the ferry to the isle of Yell, then drove north across the island for the ferry to Unst. Unst was an important hub for the Vikings, and Viking longhouses are all over the island. We visited the remains of the longhouses at Underhoull, which have been excavated in the last decade. The walk also included Underhoull broch, boat noosts, a beautiful sandy beach, and we finished our walk at the ruins of the chapel at Lund, which has some distinctive Viking crosses in the graveyard. The afternoon was spent at Hermaness nature reserve. Our walk took us to the seabird cliffs at the west, which is occupied by large gannet colonies, puffins, and many other seabirds. Looking north we could see Muckle Flagga, the most northerly lighthouse in Britain, perched on a rock in the sea. It was breezy when we were at the cliffs, and a bit wet, but everybody agreed that it was very much worth it.

Our plan was to head to the most northerly point of Mainland Shetland for a walk on Fethaland today, but the wild Shetland weather forced a change of plan, on safety grounds. These islands are so rich in archaeological history that we had plenty of alternatives and so, after a stop at the portage site of Mavis Grind, we drove off to explore a Neolithic site comprising standing stones, locally known as the Giant’s Grave, and remains of a chambered tomb. After a brief stop to purchase some local knitwear, we visited Tangwick Haa Museum where we took shelter to eat our packed lunches, afterwards braving the weather to view an old horizontal watermill nearby. Then it was on to the village of Stenness and an overview of the Shetland haaf fishing industry of the 18th and 19th centuries. A couple of seals taking shelter from the stormy seas watched us with interest as we searched the shoreline for agate and amethyst stones. It was back to the comfort of our hotel after that for a lecture on crofting by our AIA lecturer/host, Dr. Mary McLeod Rivett, followed by a presentation of the Up Helly Aa story and a farewell dinner.

Today we were down south for one of the highlights of the tour, a visit to Jarlshof. We visited Lerwick in the morning and avoided being at Jarlshof at the same time as the passengers of a big cruise liner. When we arrived it was very quiet and we had the site almost to ourselves. Jarlshof has 4,000 years of human history and contains a remarkable sequence of stone structures – late Neolithic houses, a Bronze Age village, an Iron-Age broch and wheelhouses, a Norse longhouse, a medieval farmstead, and a 16th-century laird’s house. We then went to St. Ninian’s Isle, which is connected to Mainland Shetland by a tombolo (a sand bar). The chapel on St. Ninian’s Isle is famous for the 28 decorated silver and silver-gilt objects from the 8th century that were found during excavations in 1958. Recent excavations unveiled interesting information about life in these days. With our heads full of impressions of the trip we boarded the overnight ferry back to Aberdeen. Tomorrow, the AIA travelers depart Aberdeen for home!