AIA Tours: In the Wake of the Vikings cruise, Glasgow to Copenhagen May/June 2015 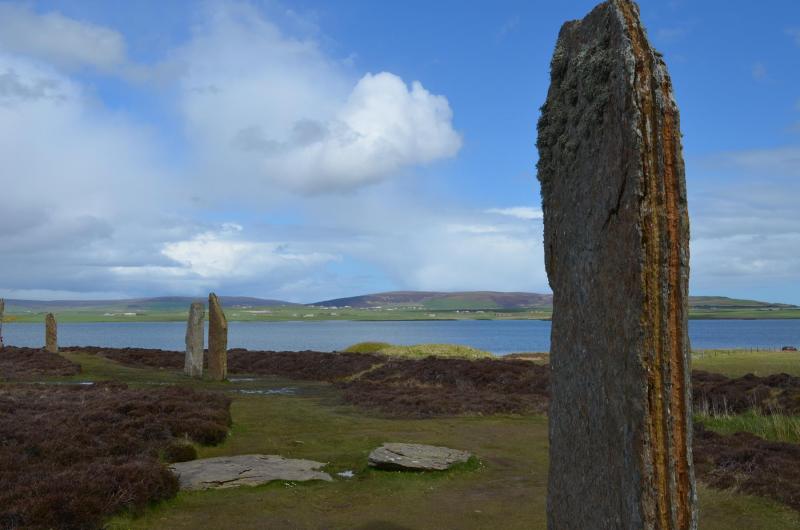 Although the focus of the tour was the route taken by the Vikings around Scotland and into Scandinavia, we took a detour from the Viking Age into the Neolithic thanks to Nick Card, director of the Ness of Brodgar project, who joined the voyage from Glasgow to Orkney. The Ness of Brodgar, which has received media attention from the likes of Archaeology magazine and National Geographic, was only discovered in the early 2000s by using geophysical survey after ploughing turned up worked stone. The site was an important meeting point comprised of numerous buildings and layers, and was probably in use for 1,000 years (its heyday was around 2800 BC). The size of the site and level of preservation of the buildings and artifacts are unprecedented in Scotland and most other parts of the prehistoric world.

In Orkney, they say that if you scratch the surface of the ground you will find archaeology. It is certainly true in this case. From the Ness of Brodgar, in one direction you can see the remaining standing stones at Stenness and Maes Howe, a Neolithic chambered tomb which Viking crusaders broke into in the mid-12th century AD to escape a blizzard, leaving behind a large collection of runic graffiti. Look in the other direction and you can see the standing stones of the Ring of Brodgar on a nearby hill. The Ness of Brodgar takes up most of the width of the isthmus between these sites. Given its size and location, it must have been extremely important site in its time for Orkney and possibly beyond.

Although excavation had not yet begun for the year and the area was still under wraps, Nick gave members of the group a tour of the site. During his preceding lecture on the ship, he treated us to pictures of some of the finds, including stones and pottery which show evidence of color, standing walls of fantastic workmanship, and some of the small objects that have been found such as a carved stone ball and colorful axe heads. The lecture and visit certainly brought to life the archaeology for our AIA group. For those interested in hearing more about the Ness of Brodgar, Nick Card will be touring in the U.S. as an AIA Kress Lecturer for the 2016-2017 season.

If you are interested in taking a private tour of the active Ness of Brodgar excavation and seeing more of prehistoric Scotland, join AIA Tours’ July 2016 hiking tour in Orkney and Shetland. If you prefer to travel by sea, join me on the AIA-sponsored In the Wake of the Vikings cruise next spring!