AIA Tours: The interior of Khufu’s pyramid and the “Tombs of the Workers” 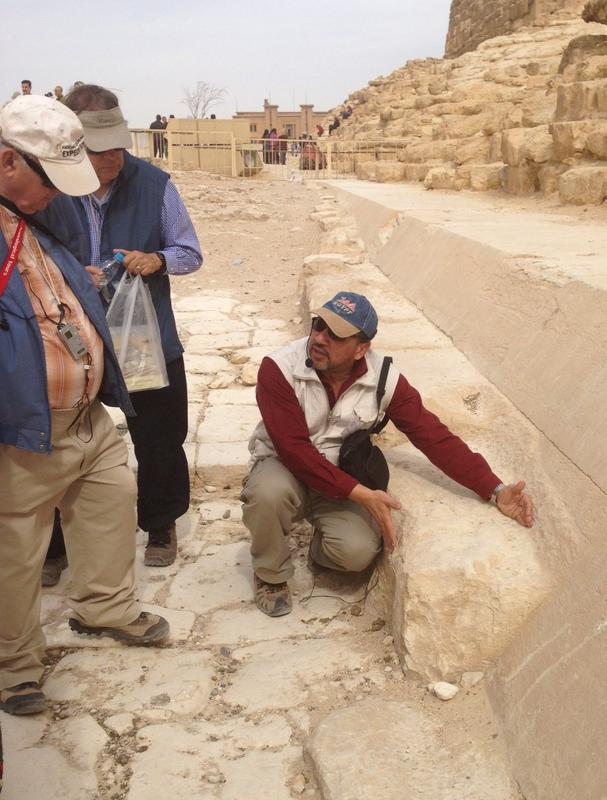 After a cold and very rainy arrival in Cairo a week ago, I was relieved to wake up to a spectacularly clear view of the pyramid of King Khufu at Giza for the first full day of our AIA Tour: Behind the Scenes in Ancient Egypt.

Heading up by bus to the plateau, most of us chose to withstand the briefly cramped conditions of the ascending passages of the interior of Khufu’s pyramid so that we could marvel at the vast internal space of the Grand Gallery, and the massive masonry of the burial chamber. Our group was amused to find that, although the pyramid was nearly empty, we were nonetheless not alone in the burial chamber: two visitors were already there, carrying out resonant, Tibetan-style chanting next to the pharaoh’s granite sarcophagus! Outside, we enjoyed expert guide Mahmoud Khodeir’s very clear demonstrations of how the traces of unfinished stone working reveal the techniques used by the ancient pyramid builders to complete the smooth final limestone casing for the pyramids.

Lunch provided an extraordinary treat: my return after more than twenty years to a much-beloved outdoor restaurant, Andrea, formerly a remote country retreat from the bustle of downtown Cairo. Located not far from the Giza pyramids, Andrea has long been famous for its fantastic grilled chicken, as well as for the charm of the traditional mud brick ovens which are used by local women to produce delicious bread, delivered hot to the table. To my surprise, however, what was once an isolated oasis of calm is now surrounded in part by tall buildings, a sign of the ever-expanding reach of Cairo’s urban sprawl!

Back to Giza after lunch, and to the so-called “Tombs of the Workers” discovered in the past decades by Egyptian colleagues working under Dr. Zahi Hawass, formerly the Minister of State for Antiquities. We were especially honored to be guided around the site by Dr. Mohammed Shata, one of the first excavators to encounter many of the tombs in this fascinating site, which lies on the slopes of the hill above the 4th Dynasty workmen’s village, which has also been under excavation by Dr. Mark Lehner and his team of Egyptian and foreign archaeologists for 25 years. I’ve always been fascinated by these tombs, which vary in type from moderately large monuments of the type known as mastabas (bench-shaped tombs), to tiny miniature markers barely a foot or two in length, all revealing a tremendous range in social status, and providing a great contrast to the sumptuous scale and decoration of the tombs at the base of the pyramids of the kings. The highlight of the visit was no doubt the “curse” inscribed in the tomb of a man called Peteti, which warns intruders against attack by crocodiles, scorpions, lions, and snakes! Fortunately our group was not blessed with the arrival of any such creatures, and we were able to return to the lovely Mena House hotel for my first lecture (on the subject of Giza, Saqqara, and ancient Memphis), and a relaxing dinner in the hotel’s lavish Indian restaurant.

[Click to view our full AIA Tours Behind the Scenes in Ancient Egypt itinerary.]