Archaeologists on the Cutting Edge

by Peter Herdrich, AIA CEO and Publisher of ARCHAEOLOGY magazine 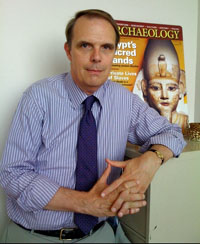 Hello all. I’m Peter Herdrich and I’m the new CEO here at the AIA and the Publisher of Archaeology magazine. I’m coming to the end of the first week on the job and believe me, I am under an avalanche of information—about the AIA, Archaeology magazine, all kinds of exciting programs, and insights from my new colleagues. We have discussed editorial, advertising, fund-raising, education, site preservation, and outreach, all of which have subtleties that are tremendously complicated and important.

And as I sort through this, one of the (few) accomplishments of my first week was to sit with Archaeology’s Deputy Editor Eric Powell and Executive Editor Jarrett Lobell and talk about one of the most important issues facing the discipline, archaeology and technology. Technology will play a critical role in the future of archaeology, helping to enable scholarly advances, and our ability to deliver that information to the entire archaeological community. The importance of technology is evident in the coverage it has received in the magazine. In the last year, 10 articles have considered some aspect of technology and its effect on archaeology. That’s more coverage than Egypt, Greece, or Rome.

The current issue of the magazine examines two aspects of technology and how it is advancing archaeology. Arlen F. Chase, Diane Z. Chase, and John F. Weishampel, a team from the University of Central Florida, report on their groundbreaking work on the Maya site of Caracol in western Belize. They are using airborne laser-scanning technology, called LiDAR, to see through the jungle and map the 70-square-mile city. (See Lasers in the Jungle.) Imagine trying to do that on the ground, armed with just a machete and fortitude. It’s a brilliant example of technology pushing the boundaries of archaeology. Plus, it’s really cool.

In the same issue, Senior Editor Zach Zorich reports on how paleogeneticists have decoded the genome of the Neanderthal. Another technological masterstroke, and another step forward in the effort to uncover the secrets of the past.

Both these stories underline one of the connections that grabs my imagination: cutting-edge technology helping to reveal ancient secrets. It’s a great contrast and one that holds tremendous promise for archaeologists on the cutting edge.

But technology isn’t just for professional archaeologists. Next time I write, I’ll tell you about how technology and the media will make it more convenient for us to get these inspiring stories to you, the worldwide community of archaeology enthusiasts.