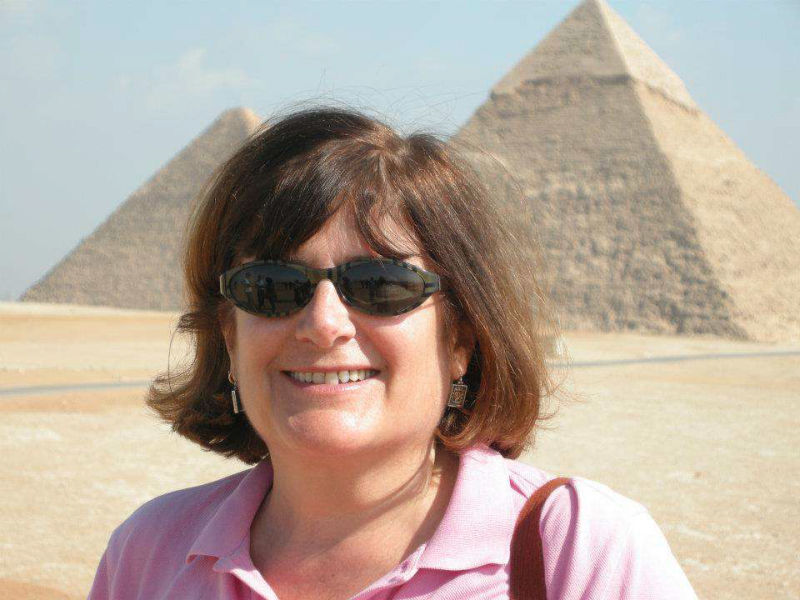 The Archaeological Institute of America is pleased to award to Barbara Tsakirgis the 2017 Martha and Artemis Joukowsky Distinguished Service Award.

For over 30 years Barbara’s efforts for the AIA, at both the local and national level, have truly epitomized “tireless, meaningful service.” During much of that period, Barbara served the Nashville Society in a variety of administrative capacities, but one of her most significant and notable accomplishments was that of creating a link between the Society and the Nashville Parthenon which now serves as one of the more outstanding venues for society lectures.

On a national level, Barbara has made her presence felt as a member of the Governing Board (Academic Trustee, 2000–2006) and by serving on seven committees over the years. She has been a tireless lecturer on the AIA circuit and has led AIA-sponsored tours to Greece.

As her nomination letter attests: “through service, teaching, outreach, and the most generous collegiality, Barbara is a pillar of our archaeological community.”

The Archaeological Institute of America lauds Barbara’s tireless dedication to the Institute and is proud to give her this distinguished award.

Thank you very much for this great honor. When I consider the contributions of Martha Joukowsky to the AIA, I am humbled that my efforts should be recognized with an award in her name.

As the professional organization for classical archaeology, the archaeological Institute of America supports the field to which I have been dedicated since the age of 11, and, in particular, since I first joined in 1975. As all of you are aware, unusually if not uniquely, the membership and support for the AIA includes an educated and enthusiastic lay component. My efforts have been dedicated to the interface between the scholarly and lay members. As secretary, treasurer, program coordinator, and society contact for the Nashville Society for over 25 years I helped her bring speakers and programs of archaeological interest to middle Tennessee. While the foundation of those programs began with the efforts of the those in the Boston office, we were able to augment the scheduled talks with speakers representing the excavation, analysis, and conservation of archaeological finds worldwide. Because of the 100% scale replica of the Parthenon erected as a symbol of Nashville, Athens of the south, I focused many of our programs on the finds, literature, culture, and social practices of the polis in which the original Parthenon stood.

I myself traveled to half of the societies in North America to speak to enthusiastic audiences, composed of both professional and lay members. In presenting my talks in such stimulating venues I was impressed by the engagement and the resulting intellectual energy of the thoughts and questions from those in attendance. As a university professor, I have deemed it of the highest importance that students of all ages but especially those at the college and grad school level be introduced to and included in the work of the Archaeological Institute of America.

Our colleagues in philology, paleography, epigraphy, and papyrology regard engagement with the primary text as the starting point for research. That direct contact with ancient material culture has been the basis for the AIA’s travel program to which I have also contributed my time and efforts. “Reading” these monuments in situ and in museums has been the confirmation for many of the AIA travelers of what they long suspected, that knowledge of the past must be preserved for the present and for the future. To have played a small role in attaining this goal has been one of my contributions to the Institute. To have included many sites from the Western Mediterranean to the Levant represents my firm belief, ones that I hope I have always conveyed to members of the AIA as well as to students, that classical archaeology is part and parcel of the bigger picture of Mediterranean studies. The cultural, social, and historical interactions can be appreciated at almost any site on the itinerary of the trips. That the AIA voyages and trips have been the well from which has sprung many of our trustees is proof positive that they have been a valuable element of programming at the Institute.

Last but not least, I must mention my two terms  as academic trustee on the board of the AIA. While such service can be deemed less glamorous than traveling to excavated sites, it is equally foundational to the general health and longevity of the organization. As the organization and our field at large witness massive changes with the use of digital technologies augmenting and enriching traditional hands-on techniques of analyzing sites and fines, I regret that I will not be able to take part as the AIA takes full advantage of the benefits that these new tools will bring to our overall mission.