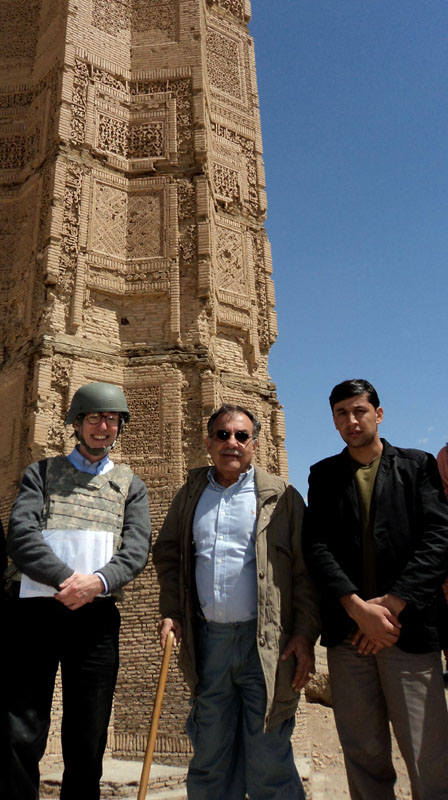 Today was devoted exclusively to a tour of the ancient monuments of Ghazni, which stretch from perhaps as early as the Achaemenid or Persian period to the Timurid period in the early 16th century. This trip required us to travel to all sides of the city. Although we advised at the beginning of the day that there was a chance of sniper fire, improvised explosive devices, and suicide bombers, we were extraordinarily well-guarded and kept out of harm’s way.

I was not prepared for the intricate decorative brickwork that covered many of these monuments, especially the two minarets of early 12th century date. Much of the architecture is mudbrick and has deteriorated badly over the years—particularly the citadel, which may have first been built in the Persian period, and Tepe Sardar, a Buddhist pilgrimage site that was constructed in the 5th or 6th century, not distant in time from the carving of the Bamiyan Buddhas. Tepe Sardar also featured a colossal Buddha, originally over 15 m high, and it too was hacked to pieces by the Taliban in 2001. Old Soviet tanks and bunkers from the 1980’s litter most of the areas.

With Laura Tedesco, Cultural Heritage Program Manager at the US Embassy in Kabul, and Stetson Sanders, Senior Civilian Representative at the U.S. PRT in Ghazni in front of the Buddhist monument at Tepe Sardar.

Receiving gifts from the District Governor of Jagori

The amount of archaeological conservation that is needed here is difficult to quantify, but ambitious plans are already underway. Omar Sultan, the Deputy Minister of Information and Culture, traveled with us throughout the day, and said that 11 sites had been conserved and another 36 more were scheduled for preservation this year, including the minarets. Nevertheless, a great deal of assistance will be needed, and they were excited to hear about AIA’s Site Preservation Program. The University of Pennsylvania is also planning to inaugurate an Archaeological Conservation Program with fellowships for foreign students, and here too I think it’s likely that we can offer assistance.

Everywhere we went, we were surrounded by children, incredibly friendly and fascinated by our arrival. All of them asked for a pen—a request that I was ill-equipped to satisfy, but I’ll know better the next time. My Dari is too limited for even a broken conversation, but we smiled and waved energetically at each other while shouting “salaam” repeatedly.

In the evening, the district governor of Jagori, which lies about 50 km to the southwest of Ghazni, treated us to an enormous dinner followed by presents for everyone, including multicolored coats for the men. In spite of the extensive tradition of hospitality and gift exchange in the Near East and Central Asia, I was taken aback by his generosity, but he responded by saying “you have left your families and the safety of your homes to help us.”