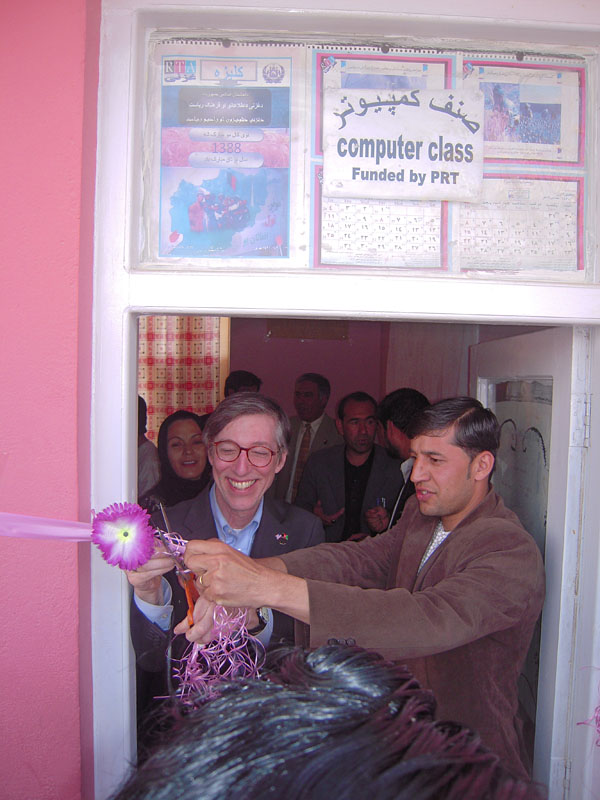 Thursday’s events fell into three groups. In the morning we attended the opening of a girls’ school in Ghazni that had been funded by the U.S. Embassy and implemented by the Ghazni Provincial Reconstruction Team (PRT) in conjunction with the Ghazi Department of Women’s Affairs. There were opening speeches by the governor along with an array of teachers, both male and female. The same message was repeated over and over again: 1) the Koran emphasizes that education should be equal for boys and girls, and is necessary for both; 2) learning English and computer skills (two of the principal subjects taught at the school) are essential to Afghanistan’s future; 3) a woman needs education so that she can teach her family.

Last year the PRT sponsored a training course in English and computers for 120 Ghazni girls, and this year that number will reach 150. Many of the speakers highlighted the need for such schools in remote areas where women have not had such opportunities. Each of us was asked to cut part of the ribbon inaugurating the school, and two of the students spoke in English to the group, largely extemporaneously. One prayed for peace and the protection of human rights; the other looked at us and said simply: “Thank you for giving me the opportunity to have a voice.”

Female students at the computer lab in the new school My culture heritage lecture to the U.S. troops

In the afternoon, following yet another sumptuous lunch in the dining room of the mayor of Ghazni, we had a meeting with the mayor, the directors of K-12 and university education, and several other city leaders. Fifty percent of the schools in the province do not have buildings; the classes occur either in tents or in the open air. As a consequence, they have to close during the winter months. The teachers emphasized that attempting to undo 35 years of damage to education within 8 or 9 years is not easy, but they remain both tenacious and optimistic, as do their students. Not long ago, an 11th grade student was shot in an effort to intimidate the others to stay away from the school. The next day all of the students returned.

In the evening I presented to the troops a lecture on cultural heritage and the archaeology of Iraq and Afghanistan. This was a very impressive and intelligent group, and most had also deployed to Iraq. The questions ranged from the fate of Saddam Hussein’s “house of Abraham at Ur,” to potential reconstruction of the Bamiyan Buddhas, to the reception of Alexander in Afghanistan today. For the last question I turned to the Afghans in the group, and found that some still regard him as a hero; others as a conqueror. Tomorrow we return to Kabul by helicopter and will meet with the ambassador in the evening.