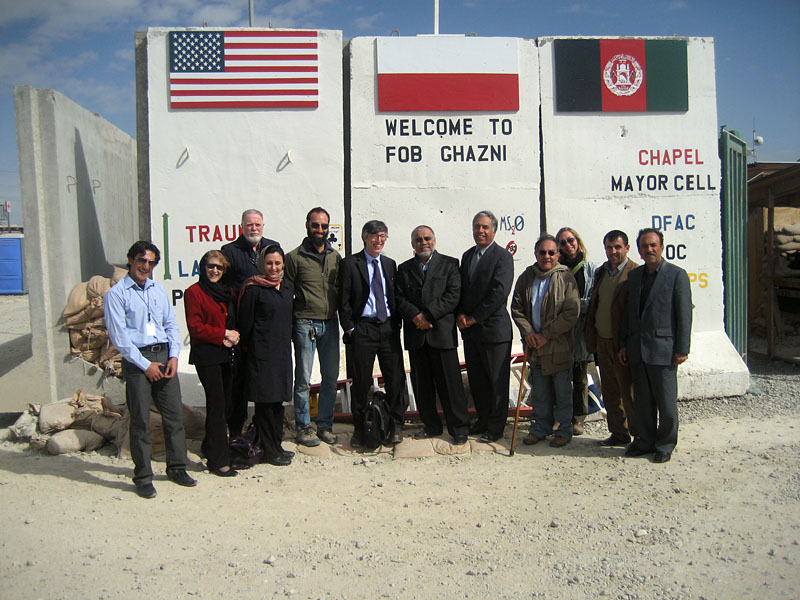 I’ve combined my last two days in Afghanistan into a single entry. Yesterday morning, Friday, we left Ghazni by helicopter for Kabul, which again included a breathtaking view of the Hindu Kush mountains. In the evening I delivered another lecture on cultural heritage protection in Iraq and Afghanistan to the staff of the US Embassy in Kabul, followed by a dinner organized by Ambassador and Mrs. Eikenberry, which included the Minister and Deputy Minister of Information and Culture, Dr. Sayed Raheen and Omar Sultan, respectively; the former Minister of Urban Development and Housing, Yousef Pashtun; and the governor and mayor of Ghazni, among others.

I sat next to a woman who was a member of Parliament as well as a law student at Kabul University. She had been the principal of a school during the dominance on the Taliban, which meant arranging for classes to be held in secrecy. When I asked her how she was able to juggle such a busy schedule, she responded “we lost a lot of time when the Taliban controlled the country; now we have to move faster.” Afghan children welcoming us at the tomb of Sultan Mahmud, Ghazni This morning, Saturday, I had a meeting with Dr. Ashraf Ghani, Afghanistan’s former Finance Minister and now a Special Advisor to President Karzai. We spoke for only 30 minutes, but we covered a wide variety of topics, including strategic planning for archaeological conservation, the looting of sites, and cultural heritage education with the local communities of Afghanistan.

The man who arranged for this visit and brainstormed with us throughout the meeting was Dr. Mohammed Qayoumi, the incoming president of San Jose State University and a member of the Ghazni-Hayward sister-city program. When I began this trip I wasn’t sure why the Embassy had put me together with the Ghazni-Hayward group, but that decision is now perfectly comprehensible. As archaeologists, we talk consistently about the sustainability of archaeological sites, but that sustainability has to be based on a strong and resourceful local community, which is what these sister city programs attempt to do.

At the initiative of Carol Ruth Silver and Humaira Gilzai, the Ghazni-Hayward program launched a literacy program for Afghan widows while providing a high level of support for the new girls’ school in Ghazni City. Mo Qayoumi and Bruce Green have been dealing with new educational programming and the possibility of distributing solar powered laptops to compensate for the electricity problems. Although I sometimes forget it, cultural heritage protection is a multi-faceted enterprise wherein projects such as these need to work in tandem with archaeological site management if both are to be successful.

None of these projects could advance and prosper without the indefatigable support of the US Embassy staff and the Provincial Reconstruction Teams. The drive of these men and women is difficult to describe, as is their altruism, and from what I can see, their creativity and accomplishments have never been sufficiently recognized in the US media.

The blogs that I’ve been sending this week have been uniformly positive, but that does not mean that no problems or risks remain. Indeed, this morning there were demonstrations in several cities, including Kabul, in response to the Florida minister who burned the Koran, the news of which is just now beginning to circulate.

Nevertheless, there is such a sense of hope in the air here—in the schools, in the provincial communities, and especially in the government. Everyone speaks of the vast amounts of time that were lost during the country’s Thirty Years War, and of the need to move forward as rapidly as possible. As members of the AIA, in particular, we should recognize the bravery that is on display every day in the villages and cities of Afghanistan, and do everything in our power to help this country secure a future for its past.