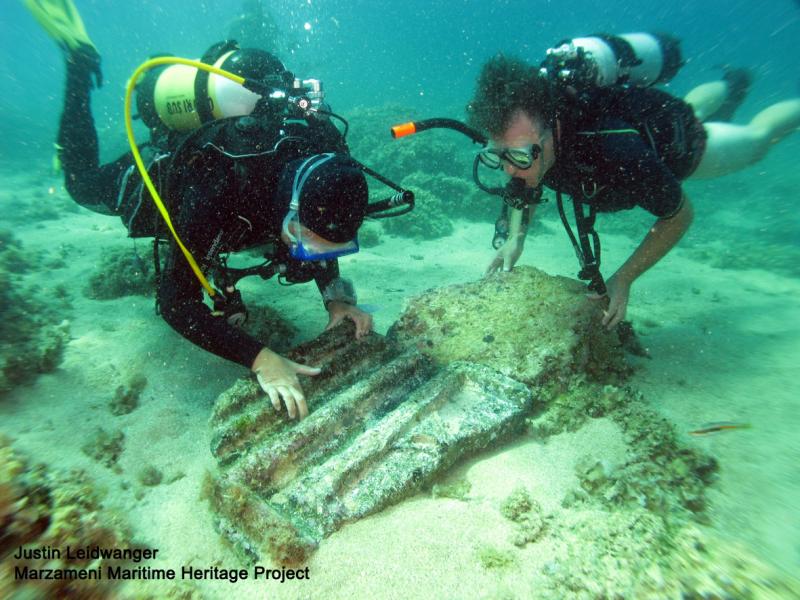 Thanks to the generosity of Mr. Lloyd E. Cotsen, the Archaeological Institute of America is proud to offer the Cotsen Excavation Grant Program, which provides two grants per year of up to $25,000 each. One of these grants is reserved for a first time director launching a new project. The 2013 winner of the Cotsen Grant for first time directors was Prof. Justin Leidwanger, working with the Marzamemi Maritime Heritage Project in Sicily.

Growing up in the Midwest “as far from the water as you can get,” one would not have immediately guessed that Justin Leidwanger would be drawn to maritime archaeology. Yet from a young age, he found himself with a need to understand how and why things happened from past to present. That and his love of history were his gateway into archaeology. As an undergraduate at Loyola University Chicago, he took an interest in economic questions about the past, and the material evidence for economic interactions. He then studied maritime archaeology at Texas A&M University and finally, Mediterranean archaeology at the University of Pennsylvania.

As an Assistant Professor of Classics at Stanford University, Justin’s research interests include “how and why people interact across the sea, how the sea influences the ways in which people build neighborhoods and form communities.” The Marzamemi Maritime Heritage Project, which is co-directed by Justin and Sebastiano Tusa at the Soprintendenza del Mare, and had its first season in 2013, is in the process of mapping and excavating a Late Roman shipwreck off the southeast coast of Sicily. This particular wreck is well known as the “Church Wreck,” for carrying the prefabricated pieces of a Byzantine church, and dates from the 6th Century A.D. Through announcements from the AIA, Justin learned of the Cotsen Grants when trying to get the project off the ground, applied for funding, and was chosen for this exciting new program.

With the help of the Cotsen grant, the project was able to recruit highly trained staff critical to underwater excavations such as this. Before receiving the grant, a limited amount of reconnaissance and planning had been done onsite, and the support helped the project get underway. In the 2013 season, they completed the surface mapping of major elements of the wreck and began the excavation process. The project serves as important training for students, both undergraduate and graduate, at Stanford and other universities. The team also works with local organizations seeking to involve the public, and to educate residents and tourists about this underwater cultural heritage. They hope that the shipwreck will become a focal point for public engagement, and an important source of development projects and the related income for local people in the future.

A preliminary report on the 2013 season appeared in the journal Archaeologia Maritima Mediterranea, and a second report will be coming soon. Excavations continued in 2014 at the same site. In just these two seasons, the work of the team at Marzamemi is already challenging many of the popular interpretations of the wreck that were proposed almost a half-century ago. Questions of where the ship’s cargo was brought together, and where is was destined, are being explored. Justin and his team are planning a few more years at this site and have also been expanding their project to larger heritage goals, including development of the local museum, outreach initiatives, dive trials, conservation of older finds, digital recording and modeling, and much more.

Since the close of the dig season, Justin has been working on a book on Roman Maritime trade, finishing research on Roman vessels of the coast of Turkey at Yassiada, and teaming up with colleagues on underwater cultural heritage workshops and initiatives in Sicily and elsewhere. He teaches courses spanning the archaeological discipline at Stanford, including a course on Mediterranean maritime archaeology. We will be thrilled to hear about the future of the Marzamemi Maritime Heritage Project, as one of the very first recipients of the Cotsen Excavation Grant.

Further information about the AIA’s Cotsen Excavation Grant Program, and the application, can be found here, or by contacting the Director of Programs, Ben Thomas at bthomas@archaeological.org. Applications for 2014 have closed. The next deadline is November 1, 2015.

If you would like to support archaeologists like Justin with a generous gift to grants and endowments at the Archaeological Institute of America, click here now, or call Jennifer Klahn at 617.353.8709.

If you are a professional archaeologist or graduate student in archaeology, and current member of the AIA, who would like to be featured on the AIA website, please contact Emily Maskas at 617.353.8703 or emaskas@aia.bu.edu.