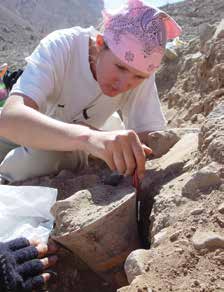 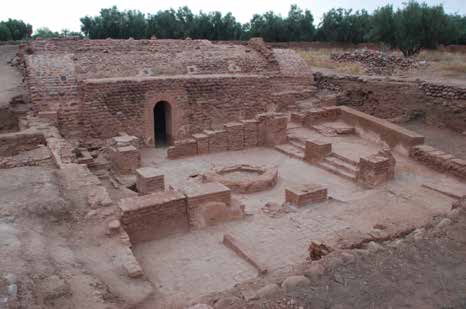 Cotsen Grants Awarded to Archaeologists Working in Italy and Peru

This year’s Cotsen Excavation Grants will fund two important research projects: one that investigates Roman pottery production and innovation at a site in Italy, and a second that examines changing cultural traditions and burial practices in the Moquegua Valley in Peru.

The Cotsen Excavation Grant for First-Time Project Directors was awarded to Astrid Van Oyen, assistant professor in the Department of Classics at Cornell University, for the Marzuolo Archaeological Project (MAP): Crafting Innovation and Community in the Roman Countryside, a five-year excavation at Podere Marzuolo in Italy. Van Oyen’s research examines the social context that influences and shapes interactions between humans and objects.

Survey and excavation have uncovered evidence for ceramic production at Marzuolo. One type of pottery in particular, Italian terra sigillata, appears to have gone through an experimental phase of production before the potters settled into a more standardized production mode. Van Oyen will explore how and why experimentation and innovation occurred in the production process. She believes that her results will challenge the current orthodoxies of the ancient rural economy as occupied by conservative, isolated, and economically underdeveloped farmers and instead reveal a more nuanced picture of the changing practices of a highly diversified crafting community that was well connected and actively innovating.

The Cotsen Excavation Grant for Ongoing Projects was awarded to Nicola Sharratt, assistant professor in Anthropology at Georgia State University. Sharratt’s research examines the aftermath of state collapse and community response to political upheaval. Her project, Cultural Collapse and Funerary Practice: A Mortuary Perspective on the Middle Horizon to LIP Transition in Southern Peru, will investigate the significant changes that occurred in the Moquegua Valley of Peru around a.d. 1200—two centuries after the collapse of the powerful Tiwanaku and Wari states that had previously dominated much of the Andes.

The collapse of Tiwanaku and Wari around a.d. 1000 marked the transition from the Middle Horizon to the Late Intermediate Period in Peru. After the collapse, small settlements were established in the Moquegua Valley by populations affiliated with Tiwanaku. These communities continued pre-collapse cultural practices for two centuries. In a.d. 1200, a cultural group called the EstuquiЦa appears to have disturbed traditions, bringing with them a different material culture, and different construction practices, rituals, and burial practices. Sharratt and her team will use the grant to continue excavating an EstuquiЦa cemetery, which will allow her to reconstruct the local political landscape during a period of fragmentation and explore the role of mortuary ritual in processes of social interaction and cultural replacement.

International Archaeology Day (IAD) is October 15, 2016. The global celebration of archaeology keeps growing both in numbers of events and participants. Last year more than 100,000 people worldwide participated in over 500 events organized by more than 400 Collaborating Organizations. To learn more about the celebration and to find out how you can participate, please visit www.archaeologyday.org. Read about past events on the IAD blog and sign up to receive updates and news as we prepare for IAD 2016.

The medieval site of Aghmat, located at the base of the High Atlas Mountains in the Ourika Valley, was the capital of the southern districts of Morocco and the center of Berber control of the region. The city was a key location for commercial, political, and religious exchange in the Middle Ages, and, despite the relocation of the capital to Marrakech in the eleventh century by the conquering Almoravids, Aghmat carried on as an important religious center and strategic link between the Sahara and the rest of Morocco.

For over 10 years, Ronald Messier, professor emeritus at Middle Tennessee State University and director of the Moroccan-American Project at Aghmat, has been excavating four of the most important monuments in the central part of the city: the hammam (public bath), the grand mosque, the adjoining ablution hall, and the royal palace. The excavations have revealed Aghmat’s historical trajectory from independent city-state to imperial capital to major commercial-religious center and its significance in the history and culture of Morocco and western Islam.

Unfortunately, the preservation of the brick-and-mortar monuments is threatened by water infiltration from heavy rainfall, occasional flooding, and erosion. Although the most critical consolidation and partial reconstruction required to prevent the hammam and some of the brick walls and pillars in the palace from collapsing has been done, more conservation needs to take place. An AIA and Hilton Worldwide Site Preservation Grant will support a two-year program to repair the eroded mortar joints in the brick walls at the hammam, grand mosque, and palace, and partially reconstruct the walls. Eroding lime plaster covering the walls will be repaired and the plaster consolidated to prevent further erosion. Drainage canals will be constructed to redirect water pooling within the sites to a nearby irrigation canal. Additional work at the hammam will repair the cracks in the vaults of the structure, and it will subsequently be treated with a waterproof sealant.

At the end of the two-year program, the site will officially open to the public. An invitation to an inaugural open house will be sent to all of the inhabitants of the village. Special invitations will be sent to local authorities, associations, and schools. As part of the AIA Site Preservation Grant, project members will create and install a series of 12 panels with photographs, diagrams, and text to tell the history of the place as well as the story of its discovery and preservation. Brochures will be prepared and distributed to visitors.

A portion of the AIA and Hilton Worldwide funds will also be used to continue a program that trains interns and graduate students from the University of Marrakech.

AIA programs and activities presented in “Dispatches from the AIA” are made possible through membership dues and gifts from generous donors. The AIA uses these resources to continue its mission of supporting archaeological research, preserving sites around the world, promoting outreach, and making the world of archaeology accessible through its publications and websites. We urge you to join the AIA and support the Institute’s efforts to understand, protect, and promote our cultural heritage. Archaeology magazine subscribers can upgrade their membership for just $40 at archaeological.org/upgrade. And new members can join at archaeological.org/join.