Dispatches from the AIA – July/August 2010 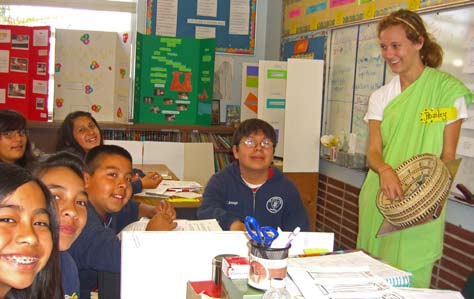 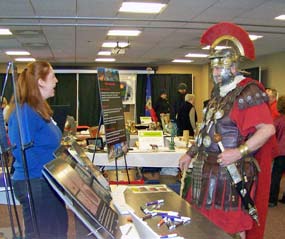 At the heart of the AIA are its 107 local societies and their passionate, dedicated members. Over the years, these volunteers have used their skills, time, and resources to inform and educate the public about archaeological issues and the need for the protection and preservation of cultural heritage. AIA societies organize programs—like those highlighted here—that are informative and appealing to people of all ages and interest levels.

In 2009, members of the AIA’s Central Arizona Society concerned about the state of public education in Arizona decided to act. The result was Apples + Archaeology—a volunteer lecture program in which Arizona State University (ASU) faculty members who teach archaeology and its related disciplines reach out to K–12 students in the metropolitan Phoenix area. The goal for AIA members and program organizers Thomas Morton and Almira Poudrier is to share the excitement of archaeology with primary and secondary school students in an effort to inspire them about archaeology specifically and learning in general.

The program follows a simple model—match archaeological experts with school teachers. Archaeologists contact the program’s community liaison and list what topics they can speak about and when they are available. Teachers contact the liaison and request speakers for their classrooms.

Faculty members from five different ASU departments and schools and students from a variety of majors have signed up to volunteer their time and abilities. Apples + Archaeology educators have made presentations in numerous Phoenix-area primary and secondary schools. An AIA Outreach Grant made possible the purchase of supplies for the classroom visits, bookmarks for each student, tote bags for schoolteachers and volunteers, promotional materials, and student AIA memberships.

In California, eight Pepperdine University students donned togas and other classical garb to teach a fun and interactive lesson about the world of Greek and Roman art and archaeology to eager sixth graders at St. Agnes School in south central Los Angeles. The Pepperdine students, from art and art history to business and psychology majors, are part of a service-learning project created by AIA and Pepperdine faculty member Cynthia Colburn.

For the lesson, the sixth graders were divided into four teams (Spartans, Athenians, Olympians, and Trojans) that rotated through four centers, each focused on a specific topic: archaeological dating and excavation, the Athenian acropolis, Augustus and Roman portraiture, and the Colosseum. The Pepperdine students used these topics as avenues to introduce the sixth graders to important themes in ancient Greek and Roman society, such as the role of the gods in Greece, and the propagandistic value of portraiture and spectacle in Rome. Lesson plans included fun activities. For example, archaeological dating and excavation included shoebox excavations (see AIA’s shoebox excavations at www.archaeological.org/education). The Athenian acropolis model became a puzzle that the sixth graders had to put back together. The Augustus and portraiture center included drawing sheets with outlines of Augustus’s portrait that children had to complete, and the Colosseum center featured thematic crossword puzzles. After each team rotated through all of the centers, the sixth graders played a competitive round of “Greek and Roman Jeopardy.” Colburn states that the service-learning program provides the sixth graders with information that would not otherwise be available in their curricula and, for their part, the college students appreciate the training and are inspired by the enthusiasm of the sixth graders.

The Fair was held at the Milwaukee Public Museum. Presenters included professional archaeologists, students, museum educators and docents, re-enactors, and a wonderful group of elementary, middle, and high-school students who presented 12 tables of exhibits and activities on “Archaeology of the Old West.” In addition to the exhibits, attendees were treated to “battles” featuring re-enactors representing Gauls and Romans. A poetry reading featured the winners of a competition entitled “Excavating the Soul—The Poetry of Archaeology.” The participants and winners of the poetry competition were public school children ranging from the 4th through 11th grades.

Approximately 5,400 people visited the fair, including 18 school groups and 763 students. The AIA-Milwaukee Society and Milwaukee Public Museum would like this to be a regular event, and the next fair has been scheduled for March 11–12, 2011.

At the AIA’s 2nd annual gala in New York on April 28, more than 400 friends of archaeology gathered to honor Martha and Artemis Joukowsky, recipients of the Bandelier Award for Public Service to Archaeology, and to celebrate the sights, sounds, and flavors of Peru. The Site Preservation Program launched a $100,000 pledge drive at the gala, and thanks to the generosity of gala attendees raised almost $70,000. The money will be used to fund critical preservation projects around the world such as the Paynes Creek site in Belize, home to the only known wooden structures from the Classic Maya period, and the first–ninth century a.d. site of Umm El-Jimal in Jordan, where AIA funds will help create a virtual museum and bilingual curriculum materials for the Jordanian national schools. For more information, see www.archaeological.org/sitepreservation

AIA members sent hundreds of letters supporting the protection of Italy’s archaeological heritage to the U.S. Cultural Property Advisory Committee (CPAC) in April in advance of the Committee’s May 6–7 meeting. CPAC originated when U.S. implemented the 1970 UNESCO Convention on cultural heritage. Its purpose is to advise the State Department on the illicit traffic in cultural materials, both emergency import restrictions and bilateral agreements, known as Memoranda of Understanding (MOUs), that govern the importation of archaeological and ethnological materials and must be reviewed for renewal every five years.

This May, CPAC reviewed the Italy–U.S. MOU to determine whether: Italy’s cultural patrimony is still in jeopardy from looting; Italy has taken measures to protect its cultural patrimony consistent with the 1970 UNESCO Convention; other nations also prevent the import of or otherwise restrict the trade in undocumented artifacts; and imposition of import restrictions is consistent with the interest of the international community in the interchange of cultural materials for scientific, cultural, and educational purposes. One key point in the debate was whether or not coins are included as archaeological materials (as they were with recent U.S. MOUs with China and Cyprus). Thank you to the hundreds of ARCHAEOLOGY readers who wrote in support of the renewal!